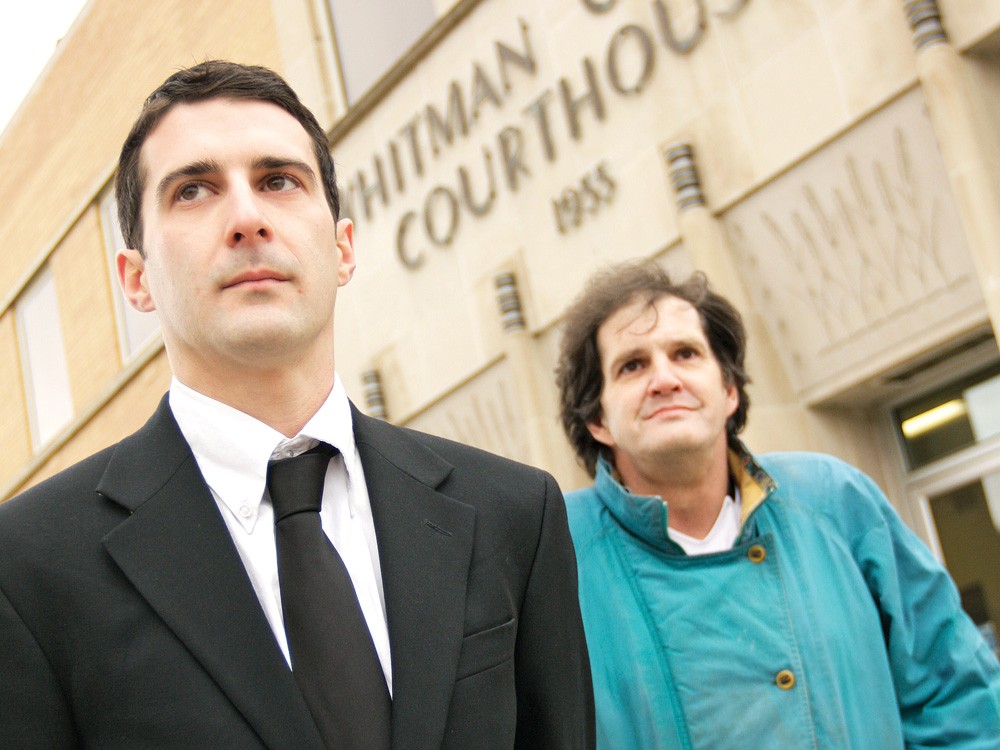 Tyler Markwart was arrested last April in a parking lot in Pullman after he refused to sell marijuana to an undercover drug task force detective who climbed into his car to buy some weed.

Markwart didn’t sell to him because the detective didn’t have the proper documentation showing he could legally use medical marijuana. Still, the Quad Cities Drug Task Force had enough evidence through the use of a confidential informant to arrest Markwart, an outspoken advocate for medical marijuana who sold to 15 patients, mainly college students.

Markwart, bespectacled, thin and intense, faces five felony drug counts, including one for growing marijuana plants in his Pullman apartment (even though he and a roommate were careful to stay under the total number of plants allowed by the state). The other charges are for delivery of and intent to deliver a controlled substance.

Now, facing three or more years in prison, Markwart is acting as his own attorney, despite having no legal experience.

He’s not alone. Within weeks of Markwart’s arrest, the Quad Cities Drug Task Force, which covers Pullman, Moscow, Clarkston and Lewiston, also arrested Adam Assenberg of Colfax, Wash., another medical marijuana provider who sees his role more as a calling than as drug dealing. Both say helping people ease a variety of ailments is their motivation, and it’s why they limit their sales to medical marijuana cardholders.

Both men have insisted on jury trials in Whitman County Superior Court. Barring last-minute delays, Markwart will be in court on Monday. Assenberg’s trial is scheduled for Dec. 19.

They both insist they were not violating state law, which limits a caregiver or medical marijuana provider to one patient. They, and others around the state, say they kept in line with the law by only selling to one person at a time.

“I want to test how far I can go,” Markwart says. “The bad part is I end up in prison. The good part is I make the law more clear.”

“I don’t get to pick and choose which laws I like, which laws I don’t like, and enforce only the laws I like,” says Tracy, who is prosecuting the Assenberg case. “It is not my goal to try to establish precedent-setting criminal prosecutions in the state. It’s the Legislature’s decision to make the policy.

“Mr. Assenberg may be motivated by altruistic motives. … However, it doesn’t mean he can just disregard the law,” Tracy says.

Markwart, 30, was attending Washington State University when he was arrested. He had been president of the campus chapter of Students for a Sensible Drug Policy. He started Allele Seeds Research, his own company to create high-quality marijuana strains. And he suggested to university leaders at an open budget forum one year ago that WSU, with its strong agricultural research programs, could resolve state budget cutbacks by planting and selling a single outdoor crop of marijuana for medical use.

Assenberg, 51, is nearly as visible. He conducts his medical-marijuana transactions in an old red-and-white ambulance with a picture of Betty Boop on the side.

Neither Markwart nor Assenberg was particularly surprised to be arrested. Wending their way through the criminal justice system has, however, given them some shocks.

During a hearing conducted by telephone in September, Markwart fired Steve Martonick, his court-appointed attorney.

“Mr. Martonick and myself cannot come to agreement on how my case should be presented,” Markwart told the judge. Martonick was urging him to accept a plea deal.

“It’s important to understand it’s very risky to represent yourself in a criminal matter,” the judge told him. “The bottom line is you can lose, and you can lose your case just because you don’t know what you are doing.”

Martonick was also appointed to defend Assenberg who, during court and in interviews, calls Martonick “the public pretender.”

Last month, as his case advanced, Assenberg insisted that Martonick file defense motions based, in part, on “equal protection” provisions in the state Constitution. When Martonick called the proposed motions “meritless,” Assenberg threatened to report Martonick to the state bar for mounting ineffectual defense. That’s when Martonick went before Judge David Frazier, citing inability to work with his client. The judge removed him from the case.

For his part, Martonick says the War on Drugs “is a huge waste of resources.” But, he adds, “I can’t use clients as fodder, so to speak, in the War on Drugs. I can’t push them towards trial when it’s in their best interests not to go to trial.”

Markwart says all the deals offered so far are to plead guilty to a felony. He says he disagrees that selling medical marijuana should be felonious, and also does not wish to lose gun rights and voting rights by pleading to a felony. He’ll take his chances with a jury.

Meanwhile, attitudes about marijuana are changing. Just last week, Washington Gov. Chris Gregoire and Rhode Island Gov. Lincoln Chafee presented a petition asking the Drug Enforcement Administration to no longer classify marijuana as a Schedule 1 drug, the most severe classification a drug can get.

Yet this fall, the Justice Department launched another round of raids on pot dispensaries in the Puget Sound area, just as the former head of Seattle’s FBI office and two former U.S. Attorneys for western Washington came out in support of legalization.

Markwart is caught in this conundrum. With limited understanding of his legal options, he is now arguing to turn the old Nancy Reagan anti-drug admonition — Just Say No — on its head.

“The best thing I can do is make the point of jury nullification,” Markwart says, referencing the act when a jury ignores a judge’s instructions and indicates they feel a law is unjust. “To say, ‘Look, if you don’t agree with this ridiculousness that’s going on right here in this courtroom, just say no, you know? Just say no.’”