It takes a real man to admit that he has been a hypocrite - and a woman to show him how. 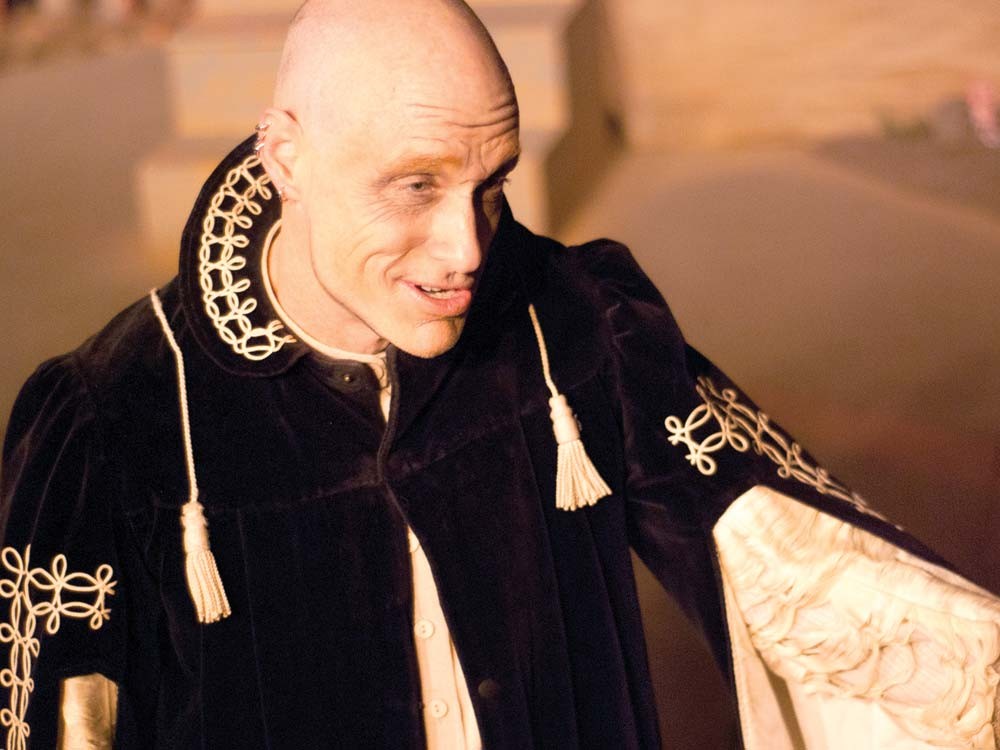 Being perfectionistic is a form of egotism. Expressing forgiveness implies one’s own fallibility. Self-pity precludes generosity.

If two hours of exploring moral psychology like that sounds fulfilling, you’re gonna love The Scarlet Letter at Lake City Playhouse — and as a well-acted re-envisioning of the Nathaniel Hawthorne novel, it’ll increase your compassion for others and yourself.

If, on the other hand, all that Puritan guilt and damnation sounds just too dreary, then you just go party with the happy-happy, no-regrets people.

Examining recrimination and remorse can be a royal pain. Also worthwhile.

Hawthorne created a famous quartet of characters: the adulteress, her strange and estranged husband, their otherworldly daughter, the minister who’s supposed to provide them counsel but who’s obviously struggling with his own demons. Adapter Phyllis Nagy has created a goth riff on the novel, with Pearl all grown up into a sullen teenager and her mother, Hester Prynne, wearing the letter A not in abject shame but in cynical awareness that others have committed their own litany of sins.

Jillian Kramer makes it clear from the beginning that Hester doesn’t feel crushingly ashamed. She’s willing to acknowledge her own guilt, yes, but even more intent on helping others escape the burden of theirs. Costumer Jamie Russell dresses Kramer in increasingly witch-like clothes, as if to emphasize Hester’s growing but mistaken reputation: She’s not a sorceress, just a woman intent on gaining some independence. Early on, Kramer’s calm reserve underscores her power; later scenes sometimes tip toward the melodramatic, as when Hester pleads with the minister.

Chris LeBlanc, in his most accomplished local performance, plays Roger Chillingworth, now returned after a long absence to find that his wife’s given birth. He’s obsessed with identifying the father, and the obsession mangles his soul, turning Chillingworth into a physical and moral monster. That’d seem simplistic (ugly guy bad), but LeBlanc lends him intelligence (a mordant wit) and a sense of humor (a nasty delight in toying with others’ weaknesses). He shows us how the vengeful torturer, full of scorn for others, ends up with a shriveled heart.

Our narrator is Pearl, Hester’s bastard daughter with the wild hair, shredded dress and surly expression. “I’m fond of decomposition,” she announces, just before firing off yet another blunt question. (“Mother, what’s a whore?”) Loretta Underwood is very good at making Pearl seem annoying, but it’s a one-note performance; the goth chick also deals out tough spiritual love and prods her parents into self-examination.

As the minister, Arthur Dimmesdale, Todd Kehne is exceptionally good — frail, wracked with a bad cough and debilitating guilt, bent double with the weight of the hypocrisy that he can’t bring himself to shuffle off. When he picks some thistles off Hester’s dress, the unspoken passion between them burns through; when he speaks publicly on Hester’s behalf, you can sense the effort that it costs him.

The set, by director George Green and Dan Heggem, is a thick forest with meandering paths, full of temptation and wickedness, in which scaffolds of shame abruptly appear. At a couple of junctures, Green arranges characters around the forest, spot-lit and bearing witness to the minister’s guilt, the effrontery of the fornicatress. And just as the succession of two-character debates about sin and damnation begins to pall, Nagy injects just enough humor to make all the theology bearable.

It’s a bit absurd, after all, that Hester’s not the only one who deserves to stand on the scaffold of shame. Her generosity of spirit involves getting other people to make an admission: The rest of us are fallible too.

Event: The Scarlet Letter Through April 3 at Lake City Playhouse