Samantha Wohlfeil photo
Incident meteorologist Jon Fox, based in Spokane at the National Weather Service, shows U.S. Sen. Maria Cantwell the equipment attached to a weather balloon that provides information such as temperature, humidity, dew points and indicators of wind direction shifts. Incident meteorologists release up to one weather balloon per day when on the scene of a fire to help keep firefighters informed of changing conditions, Fox says.
During a visit to Spokane on Wednesday, June 1, U.S. Sen. Maria Cantwell (D-WA) stops by the National Weather Service station to discuss updates to weather forecasting tools that are essential during wildfire season. She's also here to promote new legislation that would provide even more upgrades.

Standing outside the weather station on Rambo Road on the West Plains Wednesday morning, Cantwell speaks with local leaders, including firefighters, the director of the Spokane Clean Air Agency and several staffers from the weather service. The group discusses forecasting system upgrades that are already on the way thanks to congressional funding, as well as future needs.

Taking the podium, Cantwell highlights important investments that were included in the federal infrastructure bill that passed last fall, including new ground equipment that will be deployed around the country to help better forecast smoke conditions. Similar to how radar helps the weather service warn communities about rain and storms a few days in advance, Cantwell and others say the new equipment will help forecast smoke conditions up to three days in advance as the particles move around the country from large fires.

Having that smoke behavior information sooner can help airports, farmers and clean air agencies as they work to maintain operations and protect the community from dangerous air conditions, Cantwell says.

In addition to lauding supercomputing and satellite upgrades funded with more than $100 million from the infrastructure bill, Cantwell says she has introduced the Fire Ready Nation Act of 2022, which would further invest in upgrades for unmanned drones to study fire behavior, invest in incident meteorologists who are deployed to large fires to create spot forecasts, and ensure better data sharing.

"We owe it to those firefighters to make sure they have the very best data about the changing of winds, the changing of conditions, " Cantwell says. "As we can see that this is going to be a constant challenge, continuing to update our tools is the best way to keep our communities safe."

If passed, the additional funding for drones could help meteorologists better study live fire behavior and improve their modeling systems, which are then used by first responders to plan not only attack plans, but also when and where to evacuate people.

"As we’re making determinations about evacuations, understanding that fire behavior is absolutely essential, because a shift in wind direction or a drop in humidity can drastically change fire behavior and mean the difference between containment and the fire making a run into a populated area," says Chandra Fox, deputy director of Spokane County Emergency Management.

"We're taking some of the most experienced IMETs out of the program, and they're not able to serve on fires anymore," Fox says.

Fox has worked with the weather service for 32 years (with about 24 of those in Spokane) and he's been an IMET for a little more than a decade. He says that the teams are kept extremely busy when they're at the scene of a fire.

If the IMET has time, they may also release up to one weather balloon per day. Specialized equipment is tied to the end of the balloon, which may go thousands of feet in the air before bursting. That equipment then relays information to the meteorologists' field laptops such as humidity, temperature, wind direction and more.

Samantha Wohlfeil photo
U.S. Sen. Maria Cantwell (D-WA) releases a weather balloon on June 1, 2022, as incident meteorologist Jon Fox (right) stands by and later shows her the detailed data it relays to teams on the ground.
"What it helps us determine is when an inversion is going to break," Fox says.

While an inversion keeps the air on the ground near the fire relatively still and calm, once that breaks, winds can pick up and significantly change the fire's behavior, he says. Think of it like taking the lid off of a pot of boiling water or opening the flue on a chimney, he says.

One of the investments Fox says he's most looking forward to is gaining access to cloud computing that will make satellite and radar information easier to access in the field than with the old software.

"Some of our computer equipment is antiquated," he says. "We can run better pieces of software the better equipment that we have." 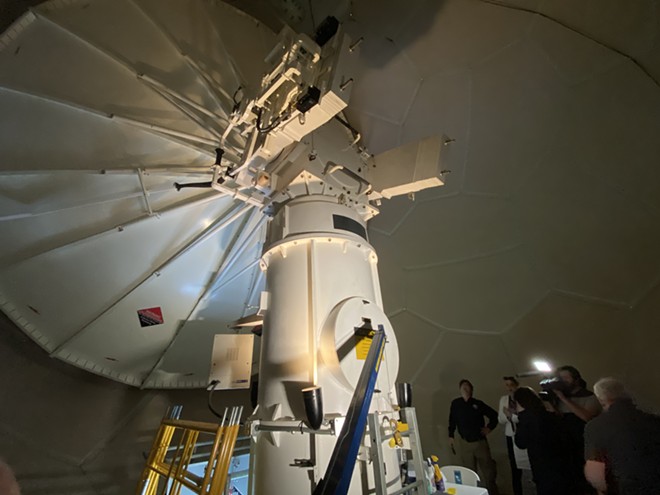 Samantha Wohlfeil photo
U.S. Sen. Maria Cantwell (D-WA) and others climb into the doppler satellite tower on June 1 to view the equipment as they discuss other upgrades coming to Spokane and other offices.