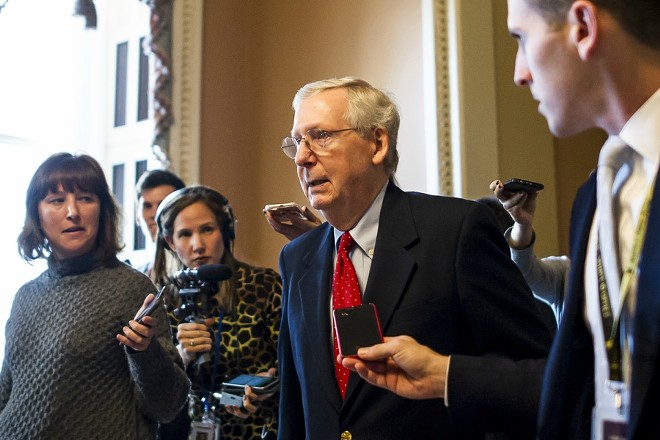 
WASHINGTON — The Senate passed the most sweeping tax rewrite in decades early Saturday, with Republicans lining up to approve an overhaul that will touch almost every corner of the U.S. economy, affecting families, small business owners and multinational corporations, with the biggest benefits flowing to the highest-earning Americans.


Senators voted 51-49, as Republicans approved the nearly 500-page bill in the early morning hours after lawmakers received a rewritten version, which contained significant changes from the original bill that passed two Senate panels last month along party lines. The last-minute revisions prompted an outcry from Democrats, who said it was impossible — and irresponsible — for lawmakers to read and digest a significant piece of legislation in such a short time.

Many of the changes stemmed from a series of last-minute agreements reached to persuade a handful of holdout Republican senators, including Susan Collins of Maine and Ron Johnson of Wisconsin, to throw their support behind the legislation. One of those Republican holdouts, Sen. Bob Corker of Tennessee, voted against the bill.

The bill’s approval, coming on the heels of the House passing its own tax bill last month, is the first significant legislative victory for the Republican Party since it assumed control of the House, Senate and White House in 2017. The lightning-fast trajectory of the bill and the ability to overcome — or ignore — objections that bedeviled previous attempts to revamp the tax code, highlights the pressure Republican leaders faced to notch a victory after several failed legislative efforts this year.

Republicans have pitched the bill as a middle-class tax cut, and the overhaul is intended to cut taxes for about 70 percent of middle-class families. But it would raise them on millions of others, since the Senate plan eliminates some tax breaks like the deduction for state and local income taxes and phases out the individual tax cuts at the end of 2025.

Businesses fare far better, with the corporate tax rate cut to 20 percent from 35 percent and made permanent. It also offers a large tax break for the owners of small businesses and other companies that are not organized as traditional corporations, a provision that was sweetened in a last-minute deal to bring two wavering senators on board.

The bill’s passage was made possible by a near-complete Republican embrace of the idea that about $1.5 trillion of tax cuts will pay for themselves, by producing enough economic growth and additional federal revenue to offset their costs to the Treasury.

That belief was contradicted by several studies, including one from Congress’ official economic scorekeeper.

The House and Senate will now work to resolve the differences between their bills and deliver a plan to President Donald Trump’s desk, with the aim of delivery by Christmas.