Dozens of senior citizens who thought they'd spend the rest of their days at the Academy, an independent living community near Gonzaga University's campus, were told this week that they have to move out by Nov. 15.

That's because Stellar Senior Living, a company based in Salt Lake City that runs assisted living facilities in several states, has an agreement to buy the property from Merrill Gardens, with a deal expected to close around the same time as the move-out date.

Residents were originally told that Stellar hoped to renovate the units and building while allowing most of them to stay in place.

"We were under the impression it was going to continue, and maybe they would raise our rent or something like that," says Pat Buckmaster, an almost 89-year-old who says she has lived at the Academy for about four years.

But that all changed Tuesday, when the residents were told that the renovations would be too extensive to allow people to live in the building while they were going on. They'll get $500 credit on their accounts to help with moving expenses, and a couple companies will be meeting with residents in coming days to help them find new placements at one of several other similar options around Spokane.

But they likely won't be able to return at any point: The building could be converted to market-rate apartments instead of continuing as an independent living facility.

"Being evicted at this stage of my life doesn’t sit well," Buckmaster says, noting the $500 credit doesn't come close to covering the costs of paying someone to pack and move her things. "You know, we’re a bunch of old people, we can’t pack anymore! Last time I packed, I figured I was gonna be in the box when they took me out of the building."

Stellar Senior Living CEO and President Evrett Benton says the decision to renovate the building into apartments and stop serving current residents was made after the company got estimates for the costs of repairs to elevators, the roof and upgrading the 95 studios, one-bedroom and two-bedroom apartments where residents currently live.

"We initially thought — and the first letter we sent out said — we are gonna do renovations around you guys," Benton says. "Then we brought in an engineer and architect and got bids in the last month, and we realized it would just be impossible."

The last time the Academy was renovated was about 30 years ago, Benton says, and in addition to all of the units, which need new bathrooms, cabinets and other items, common areas need to be upgraded.

Benton says the company is confident every senior in the facility will find a new place to live locally. Unlike with the closure of the Cooper George, which caused some concern when it stopped serving as an assisted living center for seniors last year to be converted to private apartments, the residents at the Academy pay their way privately, not through Medicaid. There are far more options for people who are able to use private pay than the government-funded program, which often does not reimburse facilities to the level required to remain open.

For her part, Buckmaster has family in town, including her son, Dave, who says he is very concerned for other residents who might not have the same assistance in their move.

"As you get up in years, you’ve got less people where you can call up a buddy and say, 'Can you help me move Saturday?'" Dave Buckmaster says. "It’s a whole 'nother ball of wax to get these people moving, and $500 is not enough. I think they should be throwing 'em somewhere around $2,500."

His best guess for the current cost of a one-bedroom at the facility is around $2,000 per month.

Pat Buckmaster says she feels bad for other residents who only recently moved in and thinks it's a shame the facility won't serve seniors anymore, as Merrill Gardens has been a wonderful place to live, providing transportation and events for the community, in addition to cooking meals. She wonders what will become of the building, which is listed on historic registers after serving as the Holy Names Academy from the late 1800s to the 1970s.

"My sister graduated from here 56 years ago," Pat Buckmaster says. "You know, it’s just devastating to all of us. I just want the word to get out that Stellar is doing a bad thing here."

Benton, who started out as a corporate lawyer, says he had the opportunity to see how he could use his business acumen to help the "Greatest Generation."

"They helped us into the world, and we’re helping them out, not to get too graphic," he says. "Our goal is not to rape and pillage, but rather to enhance a very fine building and also to bring up to standard the property that’s there."

Residents expected to have a meeting with representatives who can help them find a new place later Thursday afternoon. 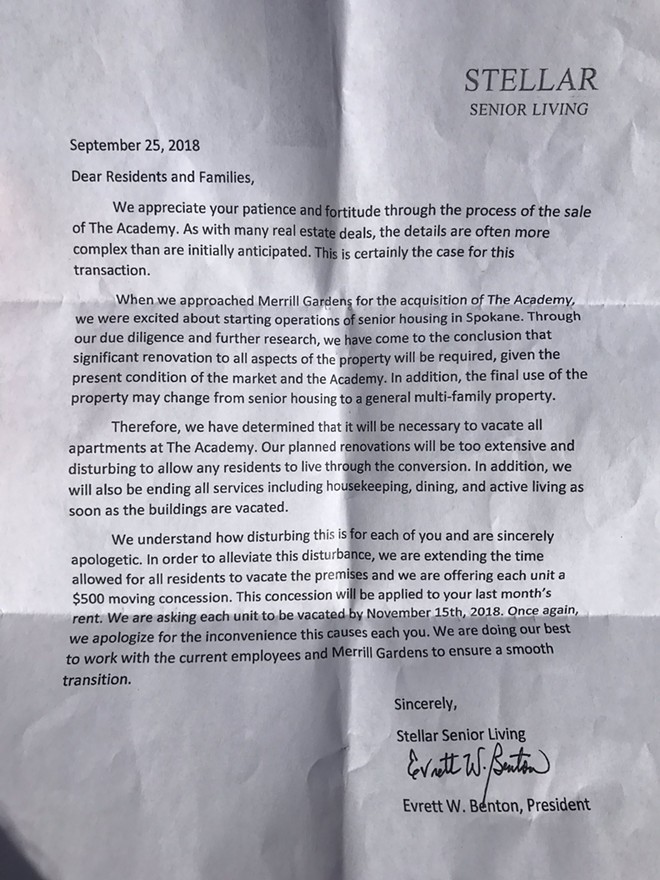 A copy of the letter provided to residents at The Academy this Tuesday, Sept. 25, 2018.