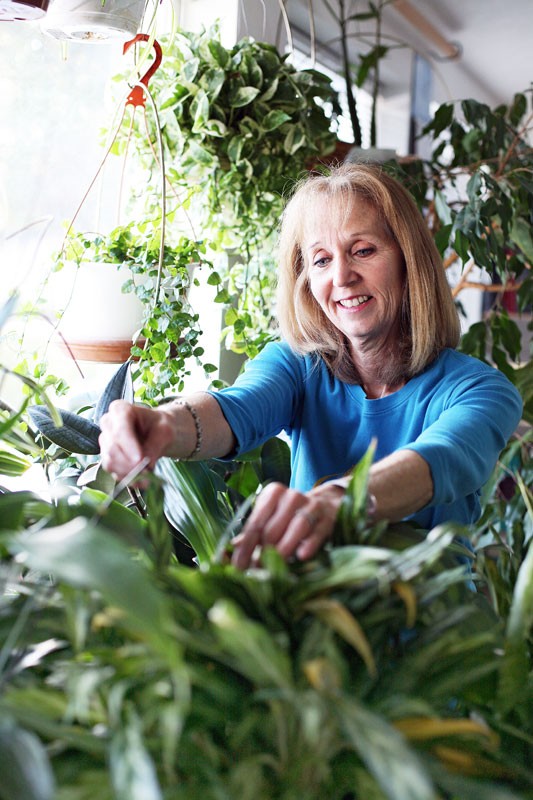 It’s a bittersweet moment when your child hands you the bouquet he’s carefully assembled from every last bloom in the yard. But really, who can deny the allure of plants? We want to eat them, be near them, nurture them and take them to people we care about. It makes you wonder if we have an innate connection to our herbaceous companions on this earth, if our brains are somehow wired to perk up at the sight of plants.

Turns out, they are.

“Some of these studies just astound me with how good the response to plants has been,” says Virginia Lohr, a professor in Washington State University’s Department of Horticulture and Landscape Architecture.

Our response to plants is partly innate and partly learned, says Lohr, but it is significant.

To take just one example, Lohr did a study in which a sterile-looking computer lab was either left bare, or subtly enhanced with a few plants around the periphery. Then subjects were given a stressful, timed computer task to complete. Those who worked in the room with plants were more efficient — completing the timed task an average of 12 percent faster — and less stressed, with lower blood pressure readings. Lohr notes, “We never drew their attention to [the plants], they were just kind of there in the room. Just having them around seems to be helpful.”

Other researchers have tracked improved healing and decreased use of pain medication in patients whose hospital rooms had windows with a view of trees as compared to those in rooms with a view of a man-made structure, as well as better productivity and decreased use of sick time by employees in offices with plants. Children with ADD seem to focus better in classrooms with even just a few plants.

Beyond those benefits, and perhaps of more concern to the homeowner, is that plants simply help keep things fresh. Lohr did another study in which she measured that bane of housekeeping — dust.

“When you walked into the room, you clearly knew there were plants there, but it wasn’t like a jungle,” she says. “We just had a few plants around the edges of the room, but we got the benefit of reduced dust.”

Other studies show that indoor plants maintain an optimal humidity level for human health and comfort and can even help filter toxic chemicals offgassed from household items, like rugs, paint and upholstery. And of course, they are always happily giving off oxygen for our breathing pleasure.

Although NASA went so far as to evaluate the effectiveness of specific plants on scrubbing out specific air pollutants, Lohr says there’s no need for the average homeowner to get that technical.

“The most important thing is to have a plant that you can keep alive and that you like,” she says. “What the research shows is that any plant can be beneficial.”

Pepper Ballien gets to see the positive effects of plants on people every day. As the co-owner, with her husband Steve, of Spokane’s Interior Gardens, she says people never fail to smile when she shows up with a bunch of fresh plants for their homes or businesses. Although green plants are lovely, having a little color can be even more fun.

“You buy a rose, and it is gone in a week,” she says. Instead, consider an orchid. “Orchids are coming down in price, and people think they’re hard to take care of, but they’re really not. And the flower lasts for three months.”

While your plants are hard at work keeping your home clean and healthy, it is up to you to make sure the plant stays healthy. Ballien says the biggest problems are related to watering and light — too much water and too little light. Don’t just water mindlessly. She recommends sticking a chopstick in the pot all the way to the bottom. “If it’s wet, then don’t keep watering. Touch the soil before you water. If it sticks to your finger, it probably doesn’t need water.”

Plants that begin to drop leaves generally are signaling they need a little more light, so consider giving them a boost.

“I often recommend enhancing the light in the Northwest in the wintertime. It can be an incandescent lamp or a spotlight on the floor. It provides light and looks pretty cool,” Ballien says.

What doesn’t help is trying to give plants extra nutrition during these dim days.

“Generally, in this part of the country, don’t fertilize from Halloween ’til April Fools Day. Our days are so short and dark, and plants don’t grow that much. They enjoy the break from the fertilizer, and they’re ready for that boost on April 1st and you can see them give a pop of new growth.”

If you just can’t seem to grow plants, Lohr suggests not giving up hope on establishing an indoor connection to the natural world.

“I carefully choose the pictures I have on my desktop,” she says, because studies have shown even looking at photos or artistic representations of plants can be calming and restorative.

To recap: less dust and air pollution, more oxygen, optimal humidity and a boost to your mental and emotional status. It’s hard to argue with going green.