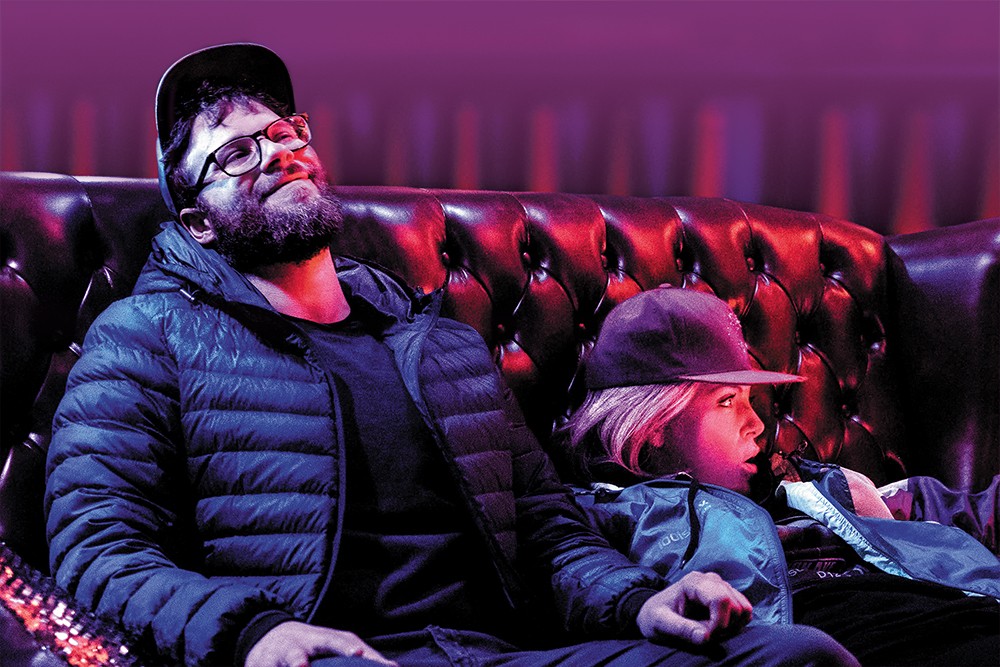 Long Shot isn't exactly the next Philadelphia Story, but it's smarter and warmer than the typical studio rom-com.

The inappropriateness of their pairing is the movie's central theme, and its greatest accomplishment is making their characters feel like they absolutely belong together, despite every clear indication to the contrary. Director Jonathan Levine (who previously worked with Rogen on the comedies 50/50 and The Night Before) and screenwriters Dan Sterling and Liz Hannah maintain a delicate balance, not only in the romance between a schlubby guy and a glamorous woman, but also in the story's political context, which is timely but never lets social commentary overpower the narrative.

Both main characters are deeply involved in politics, and their commitment to their respective beliefs is one of the things that draws them together (and later threatens to tear them apart). Rogen's Fred Flarsky is a crusading left-wing journalist who loses his job at a Brooklyn alt-weekly when his company gets bought out by a conservative billionaire (Andy Serkis, disappearing under layers of makeup instead of motion capture for once). Theron's Charlotte Field is the poised, intelligent secretary of state under a buffoonish president (Bob Odenkirk) who got elected thanks to his experience playing the president on TV. When he decides not to run for re-election, he offers to endorse Charlotte if she wants to declare her candidacy for president.

Fred and Charlotte are also former childhood neighbors, and Fred still vividly remembers the crush he had on the slightly older Charlotte when she was his babysitter. They meet again at a fancy fundraiser thanks to Fred's finance-bro buddy Lance (O'Shea Jackson Jr.), and there's obvious chemistry right away, even if neither of them can see it going anywhere at first. The filmmakers take the time to build the romance slowly and organically, as Charlotte first hires Fred as a speechwriter and then starts spending more time with him, as they get to know each other under the guise of work.

The political storyline, which focuses on Charlotte's campaign for a vaguely defined environmental initiative as a way to launch her presidential run, sometimes feels like Aaron Sorkin lite, and the issues that both Charlotte and Fred advocate for aren't defined clearly enough for them to debate about anything specific. But there's enough contrast between Fred the idealist and Charlotte the pragmatist to understand how they can educate and influence each other, and even if the movie equivocates on policy particulars, it has a strong sense of the challenges that Charlotte faces as a woman in the public eye.

More importantly, it has a believable love story at its core, as Fred and Charlotte fulfill needs in each other's lives and open each other up to new experiences. Rogen plays an effective variation on his typical blustery man-child, and Theron demonstrates her rarely highlighted flair for comedy, while remaining elegant and indomitable (even when Charlotte is forced to deal with an international crisis while stoned for the first time in her life). June Diane Raphael gets to pre-emptively voice all of the audience's potential criticisms as Charlotte's deeply skeptical chief of staff, and her acerbic presence helps to deflate any possible self-importance. The comedy occasionally tips too far into juvenile gross-out territory, but most of it is founded on witty repartee, the kind of back-and-forth that's driven the best romantic comedies since the 1940s.

Long Shot isn't exactly the next Philadelphia Story, but it's smarter and warmer than the typical studio rom-com, showing two serious, multifaceted people coming together in mutual respect — and a surprising amount of genuine sweetness and passion. ♦

The original print version of this article was headlined "Running Mates"

Ask Dr. Ruth is a charming documentary tribute to the world's most famous sex therapist

Set amidst opioid addiction and financial ruin, Little Woods is an empathetic slice of rural noir