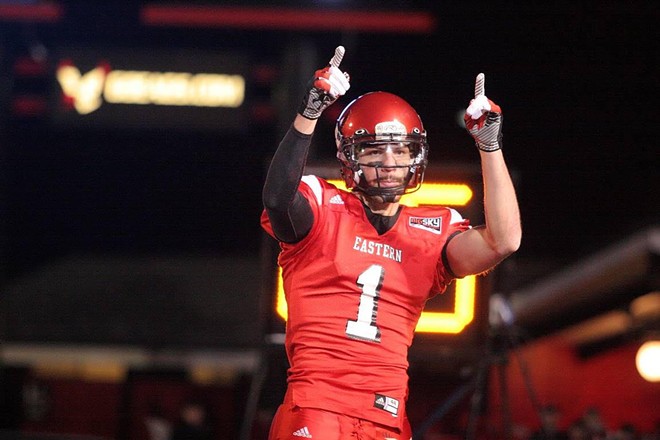 EWU Athletics
Brandon Kaufman caught a huge pass against Montana in 2012, but you can relive the excitement in 2020.

In this week's issue of the Inlander I wrote about how the lack of sports on TV is maddening for those of us who love baseball. Or golf. Or tennis. Or basketball.

While I've salved my sports-barren soul by watching movies about sports, various outlets are seriously pumping out classic old ball games for fans to watch — games that used to only be available on grainy YouTube vids or Dark Web-based Hungarian pirated cable programs.

Inland Northwesterners will be particularly interested in what ROOT Sports has in store — especially the classic EWU Eagles football games they're going to start reairing beginning April 4 at 1:30 pm with a 2012 showdown against Montana that featured Vernon Adams leading a stunning comeback against the Griz.

ROOT Sports isn't the only spot to catch some Eagles football. SWX is also reairing some of EWU's greatest hits, starting this Saturday at 5 pm when the station will play Eastern's 2019 home win over North Dakota. Check in at the SWX website for updates on games.

SWX will also re-air some local hoops of interest. This Sunday, the station will air the 2017 hoops matchup between the Eags and Portland State that ended as a 130-124 Eags win as both Bogdan Bliznyuk and Jacob Wiley poured in 45 points. And on Tuesday, March 31, the station will air a 2005 Gonzaga/Eastern game at Spokane Arena when Adam Morrison dropped 21 points to lead the Zags over Rodney Stuckey's 21 points for the Eags.