Seventh in the Nation

Washington's big gay week. Plus, revolution and a challenge. 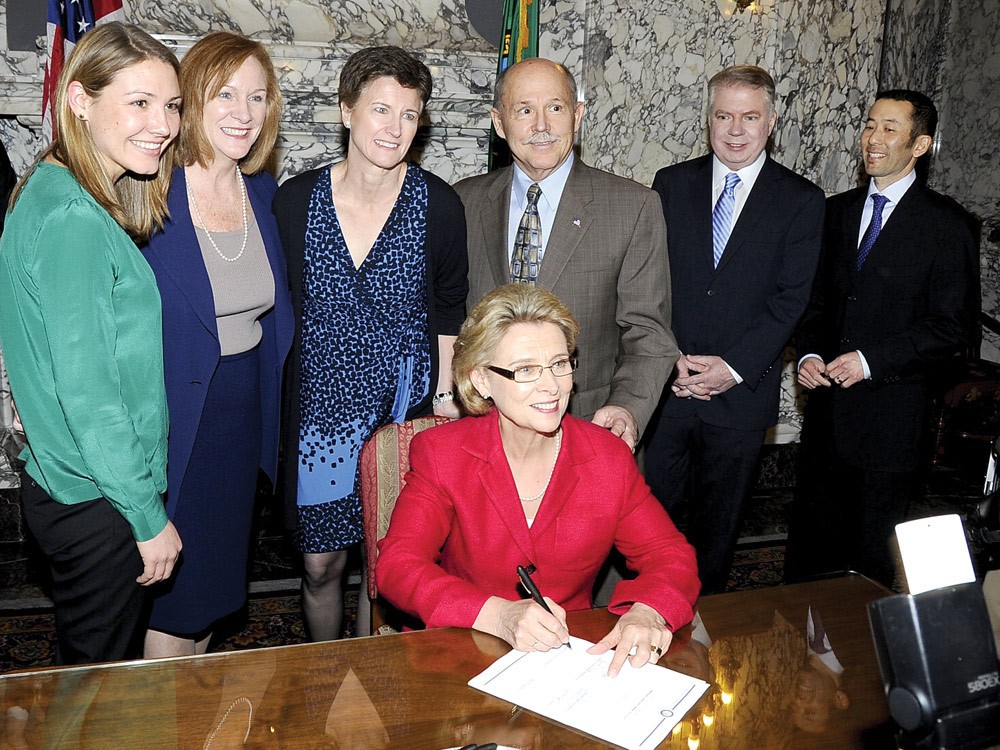 In December, Washington Gov. Christine Gregoire promised she would sign a bill legalizing gay marriage if the Legislature passed it.

The Legislature passed it. On Monday, she signed it. Washington is now the seventh state to allow same-sex marriage.

But gay couples won’t be able to get married right away. There’s still the 90-day waiting period for legislation to become law. In the meantime, groups have already begun allying to repeal the law. The Stranger reports that multiple groups separately tried to file for a referendum before the law was officially signed. Backers of Referendum 74, which would repeal the newly signed law, need to collect more than 120,000 signatures to appear on November’s crowded ballot, which will also feature a presidential race, a U.S. Senate race and the question of completely legalizing marijuana, among other issues.

As Gregoire signed the bill, GOP presidential candidate Rick Santorum — famous for his outspoken and controversial belief that gay marriage would hurt society — arrived in Washington for a private meeting with groups opposed to the new law. (Daniel Walters)

The Revolution Will Not Be Televised

A year after revolutionaries took over Egypt, Tunisia, Wisconsin and a Manhattan park, here comes the Peace and Economic Justice Action Conference

This weekend, the Peace and Justice Action League of Spokane will be holding a series of classes to keep the revolutionary spirit of the last year alive.

The conference’s opening reception is this Friday, Feb. 17, from 5:30 pm to 8:30 pm at the Unitarian Universalist Church of Spokane. It will feature spoken word and music, along with a screening of the short film “Maria Full of Hope,” and it’s free to the public.

The “action” portion of the conference is Saturday, Feb. 18, from 8 am to 5:30 pm at the same location. It will include keynote speaker Steve Williams, founder of People Organized to Win Employment Rights and co-author of Towards Land, Work and Power: Charting a Path of Resistance to U.S.-led Imperialism. There will also be two-dozen community-organizing workshops (don’t tell Sarah Palin!) ranging in topics from police reform in Spokane to the disintegrating middle class. There will also be a young-activist-leaders panel discussion. Admissions costs $40 for the general public. (Joe O'Sullivan)

A Spokane businessman and filmmaker thinks he is the man to defeat incumbent U.S. Rep. Cathy McMorris Rodgers.

Rich Cowan is the first Democratic challenger to McMorris Rodgers, the fifth-highest-ranking Republican in the House of Representatives running for her fifth term. His candidacy was first reported on Inlander.com.

Cowan attended Washington State University and now owns the film production company North by Northwest, according to his website. He has not previously held elected office.

According to the Federal Elections Commission, McMorris Rodgers has $720,302 in the bank. Cowan’s fundraising totals were not available as of press time, but campaign spokeswoman Candace Mumm says Cowan filed to run in January and will be kicking off his campaign next month. (Chris Stein)