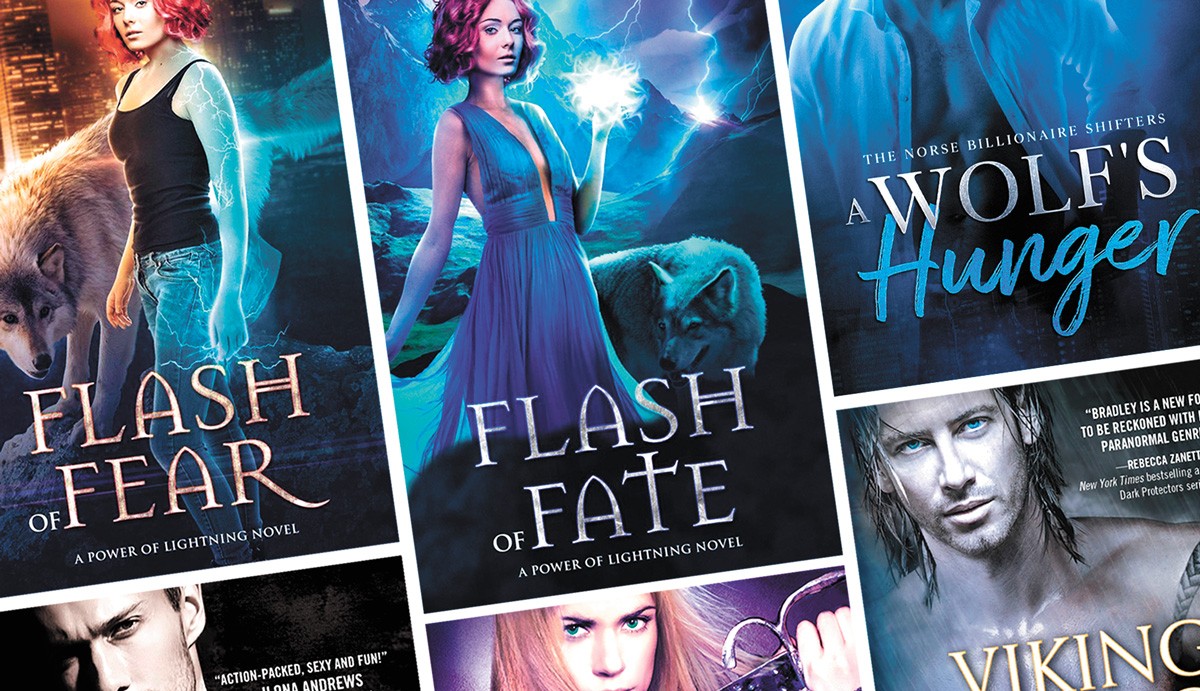 Take it from a professional romance writer: Sex scenes and action scenes are more similar than you might think.

"If you're writing a fighting scene, you have to keep track of 'where are the different players at different points?' You're choreographing a lot of movement in the scene," says Åsa Maria Bradley, Spokane author of best-selling tomes that her website calls "sexy paranormal romance and action-packed urban fantasy."

Of course, finding the perfect balance of thrilling action and steamy romance is not easily done, but the 49-year-old Bradley has turned her passion for writing into a best-selling career in the romance literature industry, one she and her friends affectionately call "Romance-landia."

Bradley's new book arriving Feb. 16, A Wolf's Hunger, is her sixth published novel. The 2010 graduate of Eastern Washington University's creative writing program has also published two novellas and a lot of short stories, including one in the 1001 Dark Nights anthology in 2020 that serves as a prequel of sorts to A Wolf's Hunger, the first part of an intended trilogy. It will be her second series of connected books after her breakthrough Viking Warriors trilogy published between 2015 and 2019.

Like her previous trilogy, Bradley's new one (which she's dubbed The Norse Billionaire Shifters) has nods to the Sweden native's interest in Norse mythology like Odin and Freya in its story, but at heart it's a wolf "shifter" tale ("shifters" being creatures that can switch, in this case, from human to wolves).

A Wolf's Hunger takes place in San Francisco, Bradley says, and there's a sort of "alpha werewolf" there in charge of the western packs of shifters. There are rumors of a brewing war with the eastern packs, and this alpha wolf has a medallion that connects him to his pack's magic. Enter the story's heroine, a star archaeologist who can also bend quantum physics in order to communicate with herself in other dimensions. She's duped into trying to track down the alpha wolf's medallion after being told it's a stolen artifact — and that our alpha wolf is the thief.

"And that's how they meet," Bradley says. "Then there's shenanigans and lovemaking and people turning into wolves. And, of course, the two of them falling in love."

Bradley has worked consistently through the pandemic, primarily staying at home and working both on her writing and in her day job teaching physics at Spokane Falls Community College. In her role as a professor, she's had to get used to communicating with students online and filming videos of her labs or lectures.

"I miss the contact that I have with students, because I think you form a better relationship with them that way," Bradley says. "But on the other hand, this [online] relationship is also interesting because students, they're sometimes a little more open since you're communicating via emails and things. They're sharing more of their lives than they might if we were just having face-to-face communication."

The virtual realm has also proved surprisingly good for her life in Romancelandia, too. A big annual conference of romance writers typically held in New York City proved a hit when it moved to a virtual event instead, and Bradley has a Zoom lunch with some fellow writers every Wednesday.

"The romance community of readers and writers has always been sort of spread out, not just across the United States, but also worldwide," Bradley says. "So there's always been social media as the way that I connect with writer friends and readers. It is something that I lean on."

Visitors to her website, asamariabradley.com, will find all the usual things authors have on their pages, from lists of her books to connections to her active Twitter, Facebook and Instagram feeds (and her Pinterest, Goodreads and BookBub pages, among others). But you'll also find videos of Bradley teaching visitors how to make a Swedish kladdkaka cake (basically sticky chocolate cake) and "the yummiest of all pumpkin breads." It's all part of staying connected to a vibrant romance community, especially during these times when they can't meet in person.

That means Bradley doesn't have any current plans for in-person book launch events for A Wolf's Hunger, but there will surely be activity online surrounding the start of her new series. Bradley says that active community online has helped her stay focused on writing through the last year.

"It's hard to be creative, and it's hard for your brain to be quiet enough to be creative, so being able to talk to other writers has been amazing," Bradley says. "And then having the readers have such easy access to me through social media, their support has been invaluable. I might think that, you know, 'The world is a really dark place, and my books are not going to have any impact.' And who wants to tweet or Instagram about 'buy my book here, I just wrote a new book' when the world is falling down around us?

"Getting messages from readers saying, 'Hey, the reason I can cope with the world falling down around me is because books like yours exist out there, and I want more of them' — that has been amazing." ♦

A Wolf's Hunger arrives in stores and online on Tuesday, Feb. 16. Visit asamariabradley.com for more information.

The original print version of this article was headlined "Pleasure Bites"