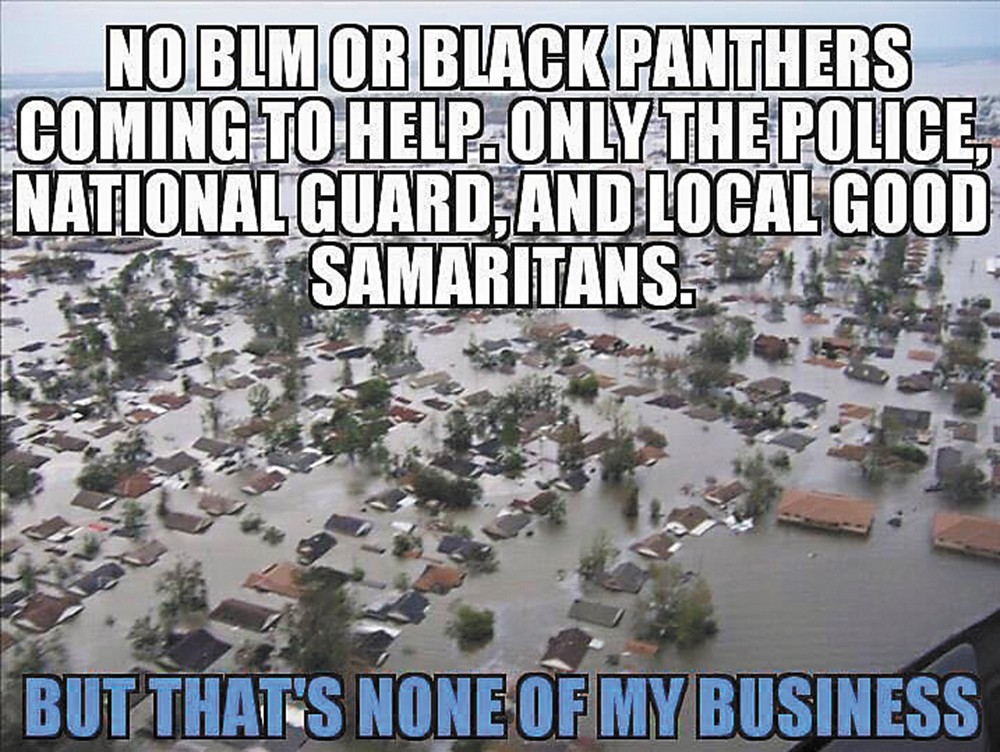 A meme shared by Detective Simmons from the Facebook page for "Operation Officer Down."

The nearly 20-year law enforcement veteran straddles the line between two worlds often pitted against each other. As a cop and a black man, there's plenty to be upset about.

Scenes captured on cellphones of police officers manhandling citizens are shared across the country within seconds. An officer's screw-up is always news, but the cop-does-good narrative often doesn't see the light of day. The gulf between police and the communities they're sworn to protect continues to grow wider.

So Simmons, like a lot of people who are irritated, turns to Facebook. A meme he recently shared has stoked a debate among area law enforcement, offering a peek into local views on the Black Lives Matter movement, race and policing.

Over an aerial photo of the recent floods in Louisiana are the words "No BLM or Black Panthers coming to help. Only the police, National Guard and local Good Samaritans. But that's none of my business."

Local city leaders argue that the meme pits the police against black activists in what was a tragic natural disaster unrelated to police shootings of black people.

Simmons, for his part, says the meme — which he shared but didn't create — was meant to voice his frustration that Black Lives Matter is only concerned when a life is taken by a cop.

Spokane NAACP President Phillip Tyler commented on Simmons' post, saying the meme is "distasteful" and "professionals should be more professional."

Tyler then shared the meme on his own page, voicing his own frustration: "The post and its associated comments are horrible, bigoted, and only serve to create a further divide between our law enforcement community and the public it is charged to protect," Tyler writes.

Threads on both Tyler's and Simmons' pages

On Simmons' page, Shoshone County Deputy J.D. Allen writes in part: "What is true about this meme, is that things we should be focusing on as America are not happening. Things like uniting as All Lives Matter. Instead of burning down communities and hurting others, we should be looking to help others. I [think] Black Lives Matter should shut down and a new group should come in. One that doesn't organize racism, hate and destruction."

Sherilyn Redmon, a neighborhood conditions officer for the Spokane Police Department, writes: "How do you know who's helping[?] Are you down checking everyone's I.D.? People who truly want to help don't need validation from the media for every good deed they do. God sees who loves thy neighbor!"

Meidl: "We need to stop being divisive and strive to move forward together."

Logue: "Are you aware of any local entities that are headed to help in the flooding? Those would be great stories to read vs memes like these that have no purpose but to divide."

VanderPol: "This meme is pathetic."

Simmons' post comes about two weeks after his boss, Sheriff Ozzie Knezovich, penned an article rebuking the incendiary comments from "talking heads" nationwide in the aftermath of recent officer deaths in Dallas and Baton Rouge, Louisiana. Between the two cities, eight officers were killed in the span of two weeks; 10 more were injured.

"Words are very powerful — as powerful, if not more powerful, than any weapon made by man," Knezovich wrote. "For it is how we use our words that drives us to use those weapons."

In a conversation about Simmons' posts last week, Knezovich expressed extreme agitation over "finger pointing." He feels that the national and local media have a penchant for highlighting "negative" news about police, and likened the Inlander's interest in the conversation surrounding Simmons' social media post to a "tempest in a teapot."

"All this is doing is creating bad blood in the community," Knezovich says. "Enough is enough. We need to get together and figure out how to fix it."

But in an age where social media is becoming more and more influential, online comments from officers and civil servants have resulted in discipline, and in some cases termination. Indeed, one of the top candidates for Spokane's police ombudsman was promptly disqualified last year after the community learned of his controversial comments on Black Lives Matter.

But for Tyler, a former Sheriff's Office lieutenant who worked as a corrections officer, the post itself was divisive.

"When you share those things, you represent the organization," he says. "So people cannot believe you're going to have any level of fair policing when you go to police them. As law enforcement personnel, it's at least troubling, and at best it's speaking to the exact narrative that's causing so much strife in the communities who say there's bias in policing."

Simmons, who grew up in Texas, says the fact that Black Lives Matter protesters don't show up when African Americans are victims of intraracial violence or, say, a natural disaster, delegitimizes them.

"That post is saying 'If black lives matter, you need to be involved in every aspect,' not just blocking roads and causing chaos," Simmons says. "Go find out why there's a multitude of shootings between African Americans in some places. If black lives matter, and there's a natural disaster, go down and help, because the same people you're criticizing are the ones who are helping."

But that assertion doesn't comport with the group's mission, which is to spotlight systemic racial disparities in the criminal justice system.

Numerous other reports and investigations have also found racial disparities in policing across the country and locally.

"Black Lives Matter is not meant to be divisive, it's meant to call attention to these instances where it appears that our voices haven't been heard," Tyler says. "It's not about casting a negative light on every single law enforcer. It's about saying some of these instances should be looked into."

For many like Simmons, a relatively narrow focus diminishes the message.

In a July 11 video posted to his Facebook page, he laments "this new focus on racism," and a "narrow focus on law enforcement," with no accountability for the public.