If you build a theater in the round, they will come. Even if you build it inside a grain silo. 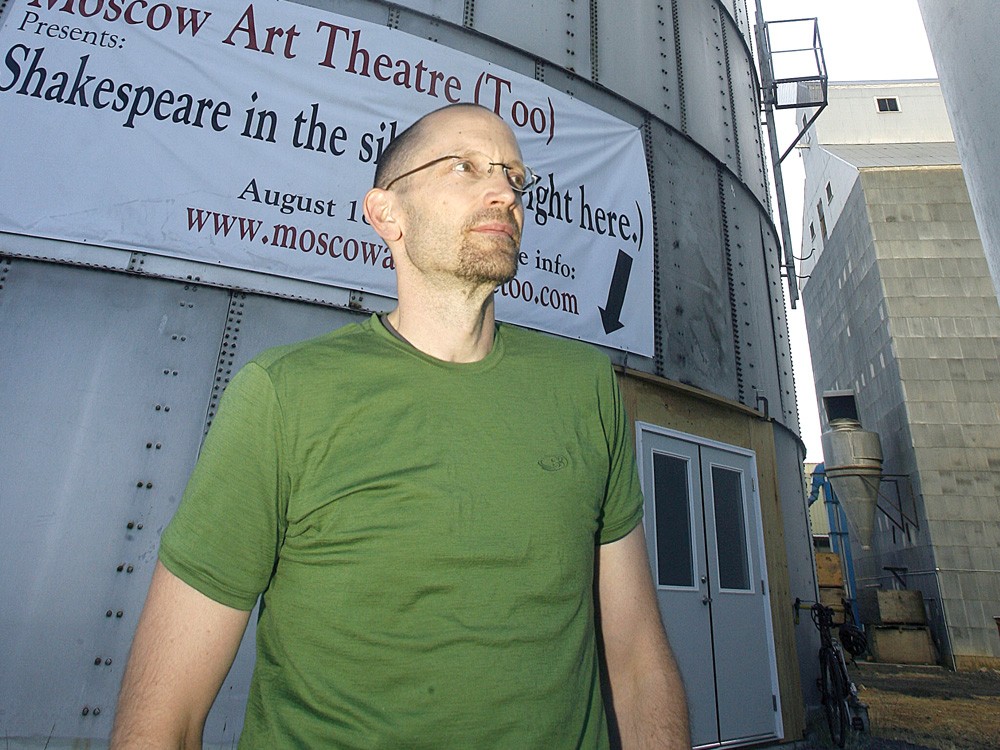 What kind of theater do you build inside a grain silo? A theater in the round, of course.

Right downtown, Moscow has seven silos that have fallen into disuse. While driving by, some residents — admit it, now — may have made mental complaints about eyesores. But developer John Anderson and theater impresario Dave Harlan saw potential for a different kind of recycling: Why not turn the giant cylinders into big circular spaces for shops, studios and a theater?

Three months ago, the largest of the silos, “Tank 41,” was just a barren, industrial workspace sorely in need of a good sweeping-out. Now Harlan has made it into a home for his new venture, Moscow Art Theater Too.

And as if delivering his first production inside a giant tin can wasn’t enough of an attention-getter, Harlan’s going to open his new theater with a Shakespeare production — one with an all-female cast.

As the artistic director of the theater and the director of this show, Harlan decided on doing The Tempest. Which local actors could portray characters like the play’s wizard and central character, Prospero, who journeys toward forgiveness, and the play’s villain, Antonio, who moves away from it? The answer he kept getting involved women he’d worked with in the University of Idaho’s theater department, where Harlan recently earned a dual-emphasis MFA in directing and playwriting.

The grain silo before construction began

Soon he had a dozen women in his production and was asking them “to become men — to embody characters who can be called male.” The male pronouns will remain, and Prospero-Miranda will be portrayed not as a mother-daughter but as a father-daughter relationship.

Harlan’s cast also has that unusual environment to play with.

“The silo is the 13th character in the play,” Harlan says. “Its battered walls and chipped green paint and odd welding marks from when it was used as a silo — all of that will be visible and will be part of our production. The design will be very rough and simple.” Inside the Tank, the production will feature just three small platforms, with 160 seats encircling a theater-in-the-round playing area. Four aisles will enable the always-visible actors to “enter” and go “just out of focus.”

As for amenities, the dressing room is a tent out back, the “lobby” is a paved apron out front, and the “restrooms” are portapotties. “It’ll be like an outdoor theater experience,” Harlan says.

And inside a hundred-foot-tall steel cylinder, you can imagine the echoes. So Harlan has draped 1,600 square feet of canvas overhead to dampen the reverb. He calls the canvas his theater’s “sky,” saying that “without the canvas, the echo is horrible — with it, it’s manageable.”

In the case of a play called The Tempest, however, that could just be an advantage. Thunder-and-rain sound effects will resonate ominously. And when Prospero pounds her/his magic staff on the floor, the echoes will swirl overhead, overhead, overhead.

With two universities nearby, Moscow Art Theatre Too has a built-in audience. “But I’ve been telling people that with any theater, you also create a market, to a certain extent,” Harlan says. “For this first show, we’ll probably get smaller audiences than we otherwise might. But we’ll get people in here — some will come just out of curiosity about this space. But then we’ll show them our hearts. I don’t want to get too lofty about this, but we plan to tell them a story that’s interesting and moving and entertaining. After that first time, they’ll bring their friends. And that’s how you create a market.”

“I’m not doing this for financial gain, but then everybody says that,” Harlan continues. Over the phone, he sighs noticeably before waxing idealistic. “You could make me sound crazy, but ... I’m doing this because I want to give something — through this story and my collaboration with these women — to the audience and the community,” he says.

He has an ambitious vision: “In the long term, I’d like to make this a lower-class Equity theater,” he says. “In the short term, I’d like to build a very serious theater company, and begin to pay actors, and bring people in to play specific roles.

“I have the means personally to start a theater at this point, so I just wanted to try.”

Meanwhile, that industrial floor is all swept out, the canvas “sky” and all the lights are hung, and those seats on the risers are waiting. All that Moscow residents have to do now is show up and see what this theater-in-a-silo thing is all about.

Event: The Tempest In a converted Moscow grain silo through Aug. 28