William H. Macy's a clown, but the poverty here is no joke. 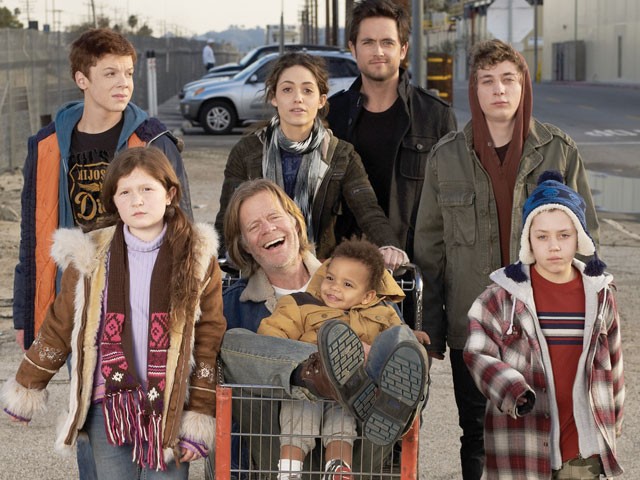 William H. Macy's a clown, but the poverty here is no joke.
roll.

The conventional wisdom is that Shameless is William H. Macy’s show. He appears in it, of course, playing Frank Gallagher, the drunken lout and (mostly absentee) father to a litter of parish rats in Chicago.

But calling him the star? It makes me wonder if we’re watching the same program. Macy’s more like the sideshow, and as funny (honestly: hilarious) as his performance often is, Shameless is at its best when its clown isn’t drawing attention away from the main event.

It’s easy to focus on the caricatures here. Frank takes out credit cards in his kids’ names and fights bums for money. The agoraphobic housewife Sheila (Joan Cusack) trades her apron for leather when the lights go out. The second-youngest, Karl, melts GI Joes and is pegged by the school principal as a budding serial killer.

The soul of the show, though (and it’s a sweetly strange one), is the camaraderie among the oldest kids — Fiona, Lip, and Ian — who are trying to cobble together an existence for the younger kids and themselves with the parents in absentia.

The drinking and the drugs and the fights and the staged deaths are in good fun, but when you start to care about those three, your mind starts to dig around the implications of their lives, and how unfair it all is.

Despite being smart as hell — he aces football players’ SATs for them — Lip has to use his intellect to scam people. Ian is gay, but still, for lack of other options, joins junior ROTC to prepare for college. (This storyline was clearly dreamed up before the repeal of Don’t Ask, Don’t Tell.) Fiona honestly doesn’t feel like she’s allowed to take a moment off from managing the house, or things might fall completely apart. She’s a smart, soulful girl, too good to be slinging hot dogs and working in a bread factory.

You have to dig for it, but seven episodes in, there’s beginning to be a message at the center of the Shameless circus. When you’re dirt-poor, the show seems to say, it doesn’t matter how intelligent or talented you are. Life is hard.

Funny, sure, but hard.

Criminal Minds: Suspect Behavior
Just what the world needs: another middling police procedural. This one follows the old model of a bunch of rag-tag-yet-well-dressed federal agents chasing psychos. But this one pumps up the star power considerably, placing Oscar-winner Forest Whitaker in the head-profiler role that Dharma & Greg’s Thomas Gibson plays in the original show. Early reports say it doesn’t matter one iota: Laurence Olivier couldn’t act his way out of formula this thick. (CBS, Wednesdays, 10 pm)

Camelot
Sneak preview of the new Starz original series that, in taking up the tale of the boy King Arthur and Merlin (played by that sexual bread pudding, Joseph Fiennes), continues the network’s fascination with mythological period drama (see: Spartacus: Gods of the Arena). Let’s hope this one is actually good. (Starz, sneaks this Friday, 11 pm)

Working Class
Leave it to the network formerly known as Country Music Television to feel the need to offer blue-collar white people a Caucasian Jeffersons. Single mom moves her kids to the ‘burbs to find a better life. This is the anti-Shameless, earnest and hollow. But goddamn if it don’t make me wanna hear some Toby Keith. (CMT, Fridays, 8 pm)