From shopping to cooking and cleanup, firefighters' shared meals represent tradition and teamwork 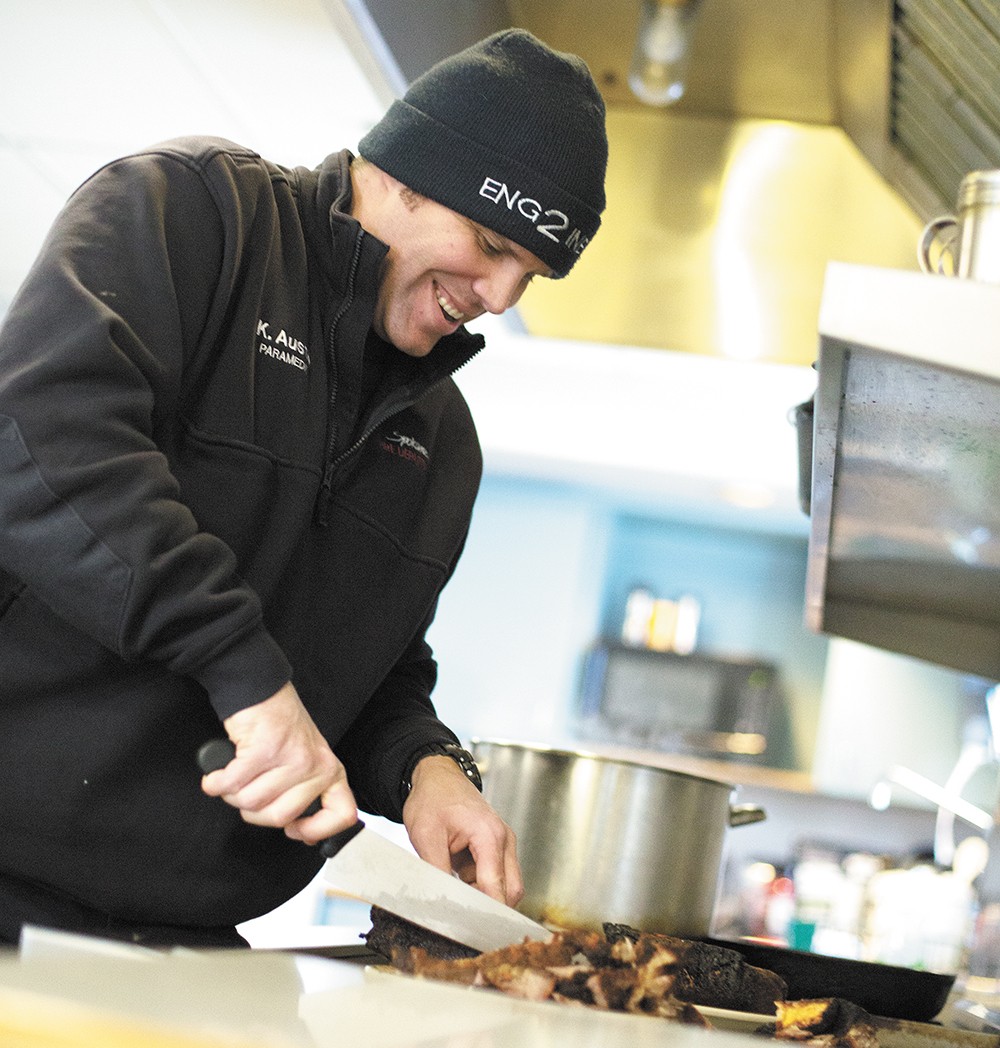 At Coeur d'Alene's Fire Station No. 1, there are 21 reasons shared meals matter.

That's the number of staff, in shifts of varying duration, whose livelihoods depend on teamwork created — or at least enhanced — by sitting down and eating together. And they graciously allowed us into their kitchens recently.

"It's just unique to this job, part of the bond of the service," says Don Bates, who serves on the red shift at Station No. 1. "The better bond we can have here, the more we can trust each other when we're actually in a dangerous situation."

Lieutenant Dave Kovac, whom we met through IAFF Local 29, the union for Spokane firefighters, agrees. "It's a team-building thing."

Kovac took us to Spokane's Station No. 2 on North Foothills Drive for a "typical" noon lunch with B shift. Except that fire station schedules — sleeping, eating, training — get rearranged when calls come in, so noontime is always flexing. Even while grocery shopping, firefighters have to be ready to roll, which is why you see teams and their rigs at the market.

While most stores accommodate such emergencies (typically, putting the food cart into the walk-in), what happens to meals in progress?

"Sometimes they're salvageable, sometimes they're not," says Coeur d'Alene firefighter Keith Benz, who on the day we visit is planning chicken tortilla soup, pulled pork and cornbread.

The Coeur d'Alene crew's living quarters — rec room, bedrooms, dining area, kitchen — are above the garage; the pole for dropping quickly to the rigs is just steps away from the kitchen. The stove's shut-off valve is nearby.

Mishaps occur, however. Coeur d'Alene Capt. Greg Rod says that 12 years ago, a pot of soup stock boiled out while the crew was training, automatically triggering alarms and a tongue-in-cheek assistance offer from central dispatch. He figures he'll be ribbed about it until he retires.

"It's always nice if you can finish cooking. It's even better if you can finish it and eat it," says Spokane's Kasey Austin. It's not unusual, he adds, to call out cooking instructions to whoever isn't on the call as you fly out the door.

Sure enough, Austin's "sous-chefs," as he calls them, Jason Keen and Josh Sampson, step in to make lunch — smoked beef with barbecue sauce, green salad and Sampson's flavorful pasta salad — as Austin departs. The smell of cooking meat lures people to the table. Fortunately, no call interrupts the feast. 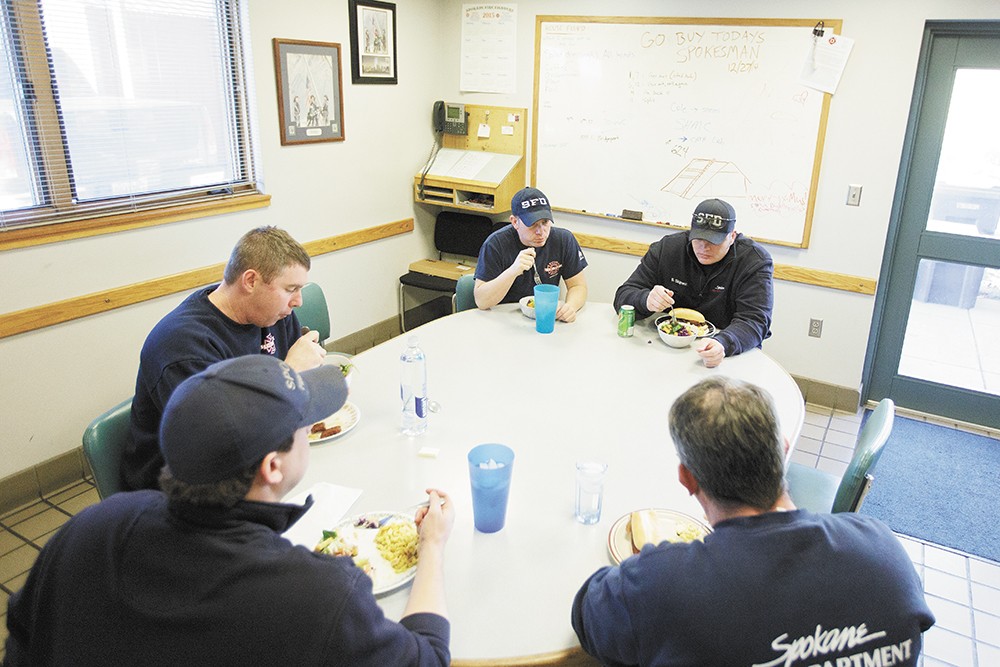 Young Kwak
Spokane firefighters gather for a group lunch at Station No. 2.

No kidding, says Rod. "Think about proportions and double that."

"Here you have to really think about budget," says Benz.

That's because there are no free rides at our region's firehouses. The city of Coeur d'Alene deducts $7 per shift for meals, while in Spokane Station No. 2, firefighters kick in $20 to $25 per month for food staples like coffee, sugar, cooking oil (as well as newspaper and cable), then $8 per shift more for meals.

Each station develops systems for shopping, food storage, even cleanup. Coeur d'Alene has one refrigerator and food locker per shift, while Spokane is more communal. A quick look inside either station's fridge reveals condiments, spicy sauces, plenty of dairy, freezers full of meat. If someone hunts or fishes, they might donate a portion for a house meal.

The same goes for cooking equipment above and beyond what the station provides.

"I suspect those pans are older than I am," says Kovac, nodding toward a row of cast-iron cookware.

At both houses, personal lockers might include treats or something for particular diets, like vegan or Paleo. But outside of health reasons, bringing your own food is frowned upon, as is complaining about what's served.

"If you don't like the cooking, then you're going to be cooking," says Spokane's Shane Skipworth.

Coeur d'Alene firefighter Greg Thaxton, known for his chili verde, agrees: "There's seven of us here, and no one wants to be the whiner or complainer." He mentions a former colleague who didn't like a particular ingredient, and thus got that ingredient served to him in every meal.

"Things are a lot more health conscious," says Keen, the station's unofficial wellness coordinator and a Coeur d'Alene Ironman athlete. Fitness, of course, is required of all firefighters and both stations have a small workout room. 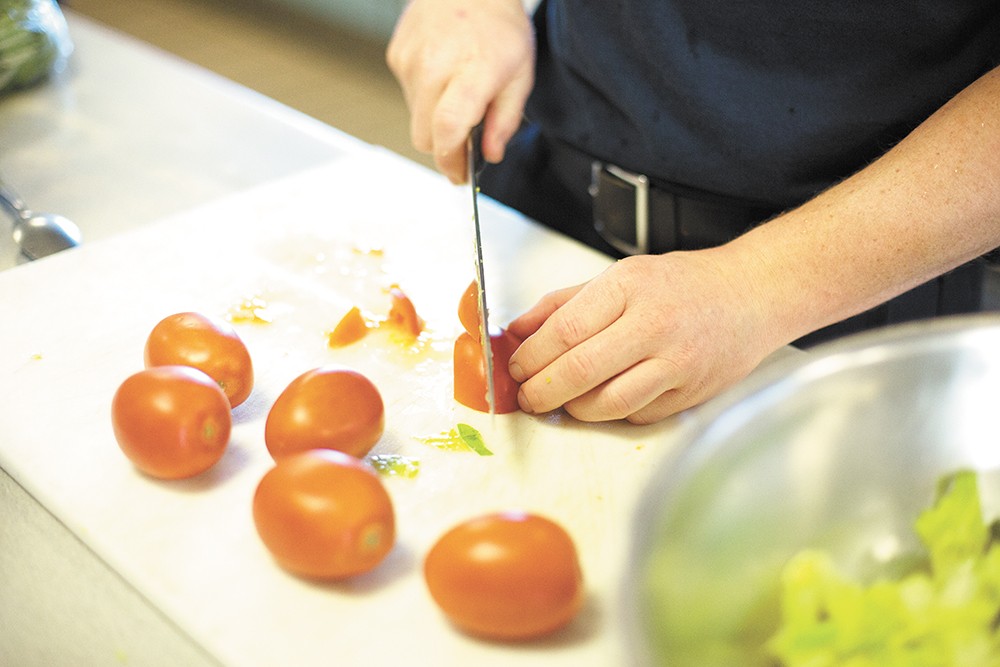 Some traditions die hard, however. Floaters (hamburgers in gravy) still prevail in some Spokane firehouses, says Kovac. Pie and ice cream is a solid tradition for celebrating promotions, etc.

The tradition of eating together, Kovac says, actually comes from when firefighters lived at the station. "It's the one thing we do that's constant," he says.

"Our trucks change, our uniforms change," says Austin, "but not food." ♦