She worked for years to escape her past, but a routine letter from the police sent her back 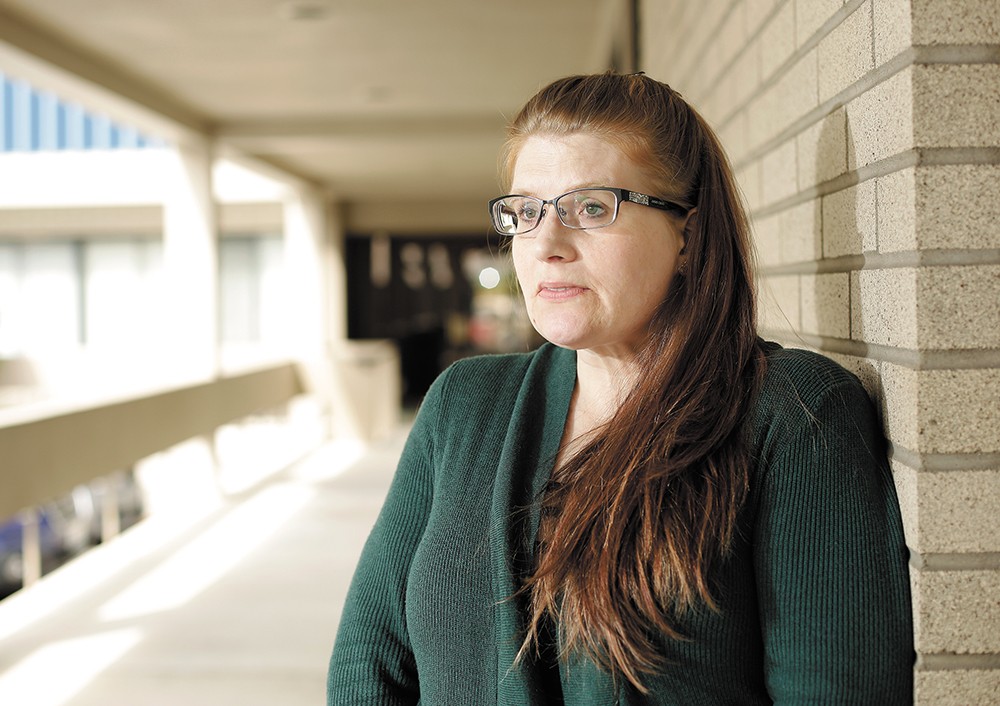 Young Kwak
The fear and guilt from her past are crushing Elizebeth Troudt as she tries to move forward.

A sharp stench of funk and sweat leak from the two thick brown paper bags as Elizebeth Troudt realizes what's inside. The red fleece jacket, T-shirt, crumpled blue jeans, a bra and underwear are relics of a life filled with drugs and abuse that she's left behind. These are the clothes she wore the night she was raped.

For the past 14 years, the items sat in police custody in general storage container 3368, row 26 of the evidence facility. In February, Troudt received a letter from the Spokane Police Department summoning her to retrieve "clothing, property," but it did not give further details. Police say that's to protect people's privacy. Troudt is blindsided.

Opening the bags transports her back to that night. She wonders: Is he getting out?

In her 41 years, Troudt feels like she's lived 10 lives: a drug addict, a liar, a thief, a felon, a woman abused by men and a prostitute raped more than once and told she got what she deserved.

But in 2011, after a stint in prison, Troudt begins adding to that list: dog groomer, mentor, recovering addict, wife, adoptive mother. Now, faced with the stench of a past she thought she'd conquered, she is hopeless.

"It feels like I finally got caught being a fraud and that I didn't belong in this life with a family and a good job and success," Troudt says. "It feels like I'm being outed for being a piece of shit."

She doesn't sleep, her nose bleeds and she can't work. She shuns physical affection from her wife and she's considered suicide. It's impossible to control the flashes of that memory replaying in her mind over and over and over.

But there's good that shines through. She holds tight to her little black terrier, Niles, who sits on her lap. She draws strength from her wife, who is still by her side. And she sees hope in the teenagers they're trying to adopt.

In her new life, she's found love she never had. She hopes that will be enough.

It's after 2 am on June 5, 2004, when Brian Frawley offers Troudt a ride. She's on her way to get heroin from a friend, she says, and isn't looking to turn any tricks that night.

Still, she accepts the offer, and once in the car, Frawley takes off like a madman in the wrong direction, Troudt recalls. Again he asks if she's "working" and if she'll perform oral sex on him.

Frawley drives to a wooded area near Peaceful Valley. He locks the doors and parks against some brush so she can't escape. He forces her head into his groin before climbing on top of her, a handgun aimed at her head, according to court records.

After, he throws the condom out the window and demands she give him all her money.

"Hurry the f—- up before you end up dead out here," he says as she hands over two $1 bills. He tells her she was lucky he "didn't do to her what he did to the other girls," according to court records.

Troudt staggers to a home in Peaceful Valley where young kids were partying. They offer to call police, but she insists they call her friend instead.

"I just wanted to get high," she says. "I was in shock. I know a lot of people are going to ask 'Why didn't you call the cops first?' All I wanted to do is get high."

So that's what she does. Afterward, she shows police where the attack occurred. They drive her to the hospital where her clothes are taken as evidence.

Even before Troudt is assaulted, Frawley was a suspect in the rape of another woman and the murder of a third. He is later convicted in March of 2006 for the murder of 20-year-old Margaret Cordova. He pleads guilty to raping Troudt and the second woman later that year.

As a child, Troudt watches as her father covers her mother in bruises. Along with them came broken bones and miscarriages, she says. Those are her earliest memories. By the time she's 27, both parents are dead. Her mother committed suicide, she says. Her father was killed in a drunk driving wreck.

She gets hooked on opioids in 1999 when they're prescribed for pain during a difficult pregnancy, she says. She begins working as a prostitute in 2004, shortly before Frawley rapes her, to pay for more drugs. Her son lives with his father during that time, she says.

When she has nowhere else to shoot up, she uses bathroom stalls around town and dissolves the heroin with toilet water. When the veins in her arms are blown, she injects the dope into her neck. She still has the scar.

Eventually, she marries her drug dealer, and in 2009, they're indicted on federal drug distribution charges. Prison saved her life, she says.

She was released in 2011. Her sobriety brings clarity. She attends Narcotics Anonymous and self-help meetings multiple times per week. She manages her opioid addiction with a prescription for Suboxone, a medicine that reduces cravings.

She moves in with a woman, Carrie, and the two eventually get married. Troudt studies to become a dog groomer. She takes pride in that work.

About a year ago, she's asked to share her story with the teenage girls in Daybreak Youth Services' inpatient treatment program. Most have been sexually traumatized or are addicted to drugs or both, says Catherine Reynolds, the life enrichment director at Daybreak.

"She was very positive and upbeat," Reynolds says of Troudt's talks. "The girls would listen intently to every word she said. They have been in her shoes. Whether they've prostituted themselves for drugs, they know what addiction is like."

Troudt's medical records show that her PTSD has been under control and her anxiety levels are basically down to zero. That's when she and her wife decide it's time to adopt a kid. They're in the process of adopting a 16-year-old and a 14-year-old.

Then the letter from police arrives.

At first Troudt thinks the clothes might belong to the teenage girl. She had run away from their home once before and police returned her wallet to them, she says. Maybe they had more of her stuff.

She wants them to pay — for her missed work and intensive therapy. Her lawyer, Brant Stevens, believes the city followed the law, but was still negligent in returning the clothes 14 years after the assault.

The police have offered an apology but say they are obligated by law to return the clothes.

"I get it. It's a long time and a long road to recovery for a survivor who fights to reclaim their life," says SPD Capt. Brad Arleth. "At the same time, I can't say we did anything wrong. Protocols and processes work 99-and-a-half percent of the time, and sometimes there needs to be an adjustment."

"It's hard to notify someone of something so significant without just ripping the Band-Aid off," she says. "But if you do that without any sensitivity, you are damaging that person. It's basic respect for human dignity to be gentle to any victim of a violent crime."

She adds that trauma can affect people differently, and it's difficult to predict how someone will react. Some people might want their items back, she says.

Theoretically, a victims' advocate like herself could act as a liaison between police and survivors in situations like this. Police say they've considered setting up such a procedure, but so far nothing has been established.

Troudt is telling her story from the sectional sofa in her South Hill apartment. Photos of faraway places, one of Marilyn Monroe and another that says "Love is All You Need," hang on the wall.

The 16-year-old girl, whom she and her wife are looking to adopt, texts her throughout the conversation. Eventually, Carrie comes home from work. They tell the story of how they met (they were both managers at Walmart) and how Carrie popped the question. Troudt's first words were: "Are you sure?"

Their plans to buy a house are now on hold as much of their savings bleeds into Troudt's medical and therapy bills.

"I'm still not the same person," she says. "It's just f—-ed up how something so stupid can fundamentally change your life. I feel so weak now. I'm sure in a lot of people's minds, it's just a piece of paper, and it was so long ago. But it's really hard for me."

This whole thing has taught her that progress isn't linear. For survivors of sexual trauma especially, it can be a precarious journey.

Troudt continues going to therapy and has started working again, though she's still hit with flashes of that night. She holds tight to the love that surrounds her. She's terrified she'll lose it. She questions if she deserves it. Without it, she's sure she would be dead.

Carrie heads upstairs to clean up from her job in construction. Their daughter will be home soon.

"I'll get dinner going in a few minutes," Troudt says to the woman she loves. ♦