As Matt Shea seeks re-election, his presence may be felt more in other local races than in his own 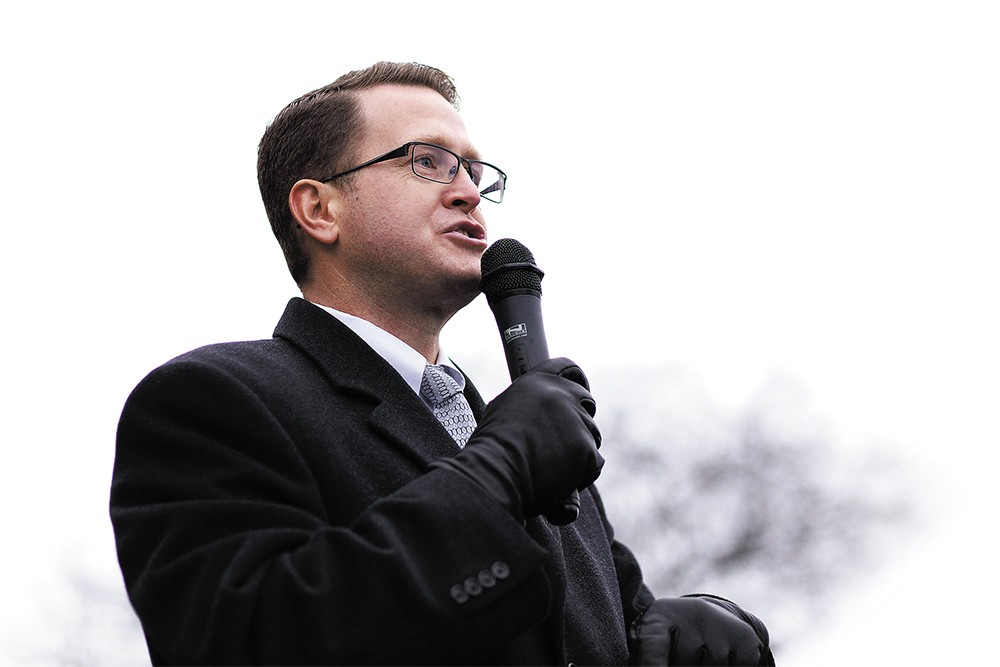 there's a stack of brochures for Tim Fennessy, a candidate for Spokane County Superior Court judge. On the back of each brochure, under the list of endorsements, a name is blacked out with what looks like Sharpie ink.

Look even closer, and you'll see the name behind the black mark: Matt Shea.

Most people know Shea as the far-right state representative from Spokane Valley who champions a "Freedom Agenda" for Washington that aims to limit government, reduce taxes and protect property rights and gun ownership. Or they know him from his ongoing feud with Spokane County Sheriff Ozzie Knezovich. Or because he visited the Bundy ranch in Nevada during the armed standoff over rancher Cliven Bundy's unpaid grazing fees on federal land, and later traveled to another armed standoff that included Bundy's son Ammon and law enforcement at an eastern Oregon wildlife refuge, in both instances in support of the anti-government protesters.

But Shea is also an attorney. He endorsed Fennessy as a lawyer who agreed with Fennessy's stance that the job of the Superior Court judge is to apply the law as it is written, whether that involves a corporation, individual or the government, Fennessy says.

"On that basis, I accepted his endorsement and felt comfortable about it," says Fennessy.

Then Shea released a podcast this summer that accused a sheriff's deputy of supplying a gun to a suspect in a triple homicide. Though Shea later amended the accusation and said the deputy did nothing wrong, he continued to speculate over Knezovich's ties to the murder suspect, while Knezovich said it was Shea who was once close to the suspect.

Sometime after that, Fennessy and his campaign took black markers to all of his brochures and crossed out the name Matt Shea. Fennessy, endorsed by Spokane County Democrats, says the circumstances of the triple homicide should be decided by a judge, not in a public forum. He thought it was appropriate to remove Shea's name, rather than be "embroiled in the controversy."

This year, Shea is running for re-election in the 4th District against an opponent, Scott Stucker, whose name is seemingly on the ballot merely as an alternative to Shea. Stucker has only raised a little more than $800, and his picture on his campaign website is a sketch of a pair of glasses and a beard. It's in other elections that Shea's name has come up more often. For some candidates, as with Fennessy, manually blacking out his name on brochures, Shea's name has been toxic. County Commissioner Shelly O'Quinn has been forced to explain her silence regarding Shea's feud with Knezovich. County commissioner candidate Josh Kerns has had to defend his association with Shea in the general election as well.

At the same time, Shea has perhaps the most enthusiastic base of supporters in the region. In a divided local Republican Party, some say that has helped sway past elections.

Shea did not respond to multiple requests for comment on this article.

"He's like our local version of Donald Trump," says Jim CastroLang, chair of the Spokane County Democrats. "Except he doesn't want to talk to anybody."

There's one conversation that stands out for Nancy McLaughlin when she reflects on what will soon end as a brief 10-month stint as a Spokane County Commissioner. In January, when McLaughlin was throwing her name into the ring for the vacated seat on the county commission, she called Shea to ask why she didn't have his support.

By the end of their talk, McLaughlin got the impression that it was because she didn't support Shea two years ago, when he won re-election. It was payback. Instead, Shea endorsed Josh Kerns, a legislative aide for Rep. Jeff Holy.

Come August, Kerns defeated McLaughlin in the primary election. The outcome was surprising to many, but not to McLaughlin. While there were plenty of reasons why Kerns beat McLaughlin, she believes it stems from a divide within the local GOP that tends to kick out anyone who doesn't line up perfectly with Shea's views.

"I was the pick-off person for this year," McLaughlin says. "Matt Shea's group has put me out, and they have marked me as if I'm not conservative enough and not Christian enough. And I tell you, that is wrong, because they have made me out to be somebody I am not."

She told Shea that he could be a unifier of the party. But instead, she says, he listed a half-dozen people previously elected or currently in office who had wronged him.

"He just would not let these wounds and hurts go that he has taken so personally," McLaughlin says.

Yet the Shea constantly engaged in controversy at home is much different than the Shea on the House floor in Olympia. Holy, who represents the 6th District, says Shea, an assistant floor leader, is one of five or six people in Olympia operating at "a different level." Holy calls Shea a "tactician" able to masterfully pass bills important to the GOP or block bills that go against the Freedom Agenda, even though Republicans are in the minority. Last year, Shea got a bill passed for tougher accountability standards for people sentenced to electronic home monitoring. Holy cites the House's inability to pass a bill in 2013 that would have forced background checks to apply to all firearm sales in the state (though Washington voters later approved a similar initiative). He credits a stroke of "brilliance" from Shea for that. (Several other state representatives did not respond to requests for comment.)

"People keep looking at [Shea] as an island," Holy says. "If he was, he wouldn't be anywhere as effective as he is."

Former Spokane Valley Mayor Diana Wilhite, who ran unsuccessfully for a seat as a Spokane Valley representative, says she aligns with many of Shea's votes as a lawmaker. But she says Shea is one person in Olympia, and a totally different person at home. "It's like Dr. Jekyll and Mr. Hyde," she says, referencing the 1886 novel by Robert Louis Stevenson.

"He goes to the Legislature and he's one person," Wilhite says. "And he comes home, and he's a totally different person."

SPEAKING FOR THE PEOPLE

Not everyone agrees that Shea has control over elections. While most, if not all, members of the Spokane Valley City Council are Shea supporters, Councilman Ed Pace says that Shea has become more of a standard for the people who already held similar beliefs.

He resists the idea that someone must first be approved by Shea before making it onto city council, or any other local office.

Pace says he saw Shea's "Freedom Agenda" slogan and it resonated with him. It became the basis for Pace's own platform. But he says the only reason Shea has a stronger voice than, for example, Bob McCaslin Jr., another 4th District representative, is because Shea has more experience. The notion that Shea controls elections in the Valley, Pace says, is "just pure bullshit."

But even if he's not directly impacting elections, his base of supporters is strong. Michael Cathcart, government affairs director for the Spokane Home Builders Association, says Shea may have the most devoted following of grassroots supporters who doorbell and make phone calls.

"As far as enthusiasm for a candidate goes," Cathcart says, "I think Matt Shea wins."

With that kind of support comes some degree of influence.

"There's a number of people who think Matt is a great person and they support him. And so, any stories that come out against him, they choose not to believe it," Wilhite says. "They're a very committed group." ♦