Shelter from the Storm

Spokane experiments in removing untreated runoff from the river. 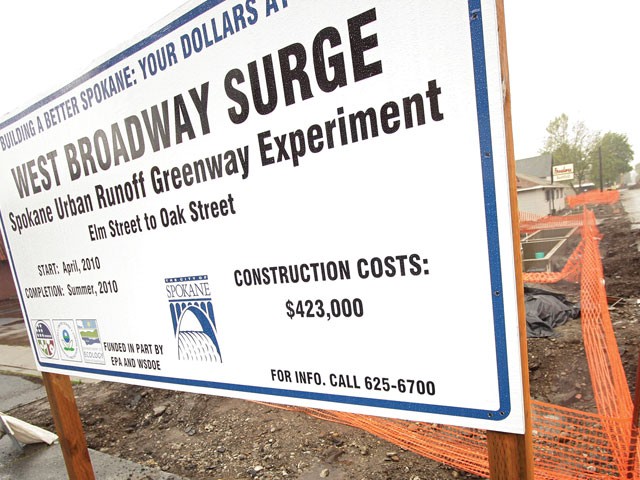 To end the city’s long history of using the Spokane River as an open sewer, Spokane is taking an innovative approach — one that’s gotten a national nod of approval.

The city didn’t begin treating sewage until the late 1950s, and while it recently won an “Outstanding Performance” award from the state Department of Ecology for wastewater treatment, raw sewage still squirts into the river when pipes are overloaded during rainstorms — as during the last few weeks.

When runoff from rainfall overloads the pipes that head to the treatment plant, the overflow — along with raw sewage in the pipe — is diverted into what is called a Combined Sewer Overflow. With 26 overflow pipes spread along the river, that overflow discharges directly into the river. Nearly 19 million gallons of overflow were discharged in 2008.

“Thirteen of them are discharging right now — that’s half of them in the city,” Spokane Riverkeeper and environmental attorney Rick Eichstaedt said on a recent rainy day.

A city Website has icons for all 26 pipes in the CSO. When one is discharging, the icon turns red and flashes. Even by early Tuesday morning, after a day without rain, seven of the pipes were still discharging, according to the city Website.

There have also been “dry events” where, thanks to a clogged pipe, sewage is routed into the river through an overflow pipe, sometimes for long periods before it is discovered.

Driven by the federal Clean Water Act, Ecology has an agreement with the city that all these sewage discharges must end by 2017.

SURGE TO THE FUTURE

In July, the city expects to have completed two experiments for treating stormwater runoff that will keep it out of the overflow pipes.

These experiments are known as SURGE, for Spokane Urban Runoff Greenways Ecosystem. One is going in on Broadway a few blocks west of the County Courthouse; the other is part of the rebuilding of Lincoln Street on the South Hill.

Both include out-of-the-box thinking — filtering street runoff through plants and soils — that caught the attention of a recent edition of Stormwater, a national journal for water quality engineers.

The idea behind SURGE is natural filtering through plants and soil and letting the filtered stormwater soak into the ground, not gush into the river.

“We call them storm gardens,” says Marcia Davis of the city’s capital projects division, who is overseeing the Broadway SURGE project.

“Some of our ideas are patterned after Portland’s Green Streets,” Davis says, “but other things make Spokane unique.”

We have a colder climate with more snow, a dormant season for plants and sometimes frozen soil, she says. We also have less frequent rain than Portland — though we can make up for it with sudden gushers.

“Another thing that makes Spokane unique is the aquifer. The Broadway neighborhood is an infiltration area for recharging the aquifer — and because of that, there is a different level of water quality” to achieve through the storm gardens, Davis says.

The big concrete planter boxes and soil and underground plumbing are in place already on Broadway between Oak and Elm.

Soon there will be native plants such as redbud, dogwood, golden sedge, sweetgum and sour gum trees, and creeping mahonia. The plants, and the soil mix, will filter away contaminants and the treated water will simply soak away back into the ground, eventually reaching the aquifer.

Davis says there will be 18 months of monitoring to see how much water the system handles; how well contaminants such as grease, oil and antifreeze are removed; and how well the plants stand up to snowfall and snow plowing.

The Lincoln Street SURGE project caught the attention of South Hill residents in a surprising way.

Some parents, whose elementary school children did classroom projects at the pond in Cannon Hill Park, became alarmed that it would be filled with dirty runoff.

A Facebook page, Spokane Aquarium, fanned this worry into a conflagration of outrage on May 13, posting a photo of a dead turtle floating belly up with the heading: “Dead turtles, ducks, snails, and frogs found at Cannon Hill Pond on the South Hill. Street crews recently installed a storm drain that now empties directly into this once pristine pond.” “I was stumped,” says Steve Hanson, one of the city designers who came up with the Lincoln Street storm gardens.

Not only was the posting incorrect — the runoff is cleaned by the filtering through plants and soil — but the pipes hadn’t even been installed.

Presently, the pond is filled with city water drawn from the aquifer at the rate of about 26 million gallons a year, since the pond is leaking. Separate funding is sought to patch the leak.

Eichstaedt, the Riverkeeper, was invited by concerned residents to tour the project. He likes what he saw.

“We walked the site with some of the engineers … and they are doing things that places like Seattle and Portland have been doing,” he says.

Sending filtered runoff to the pond “is good for the river in two senses — we are not taking from the aquifer to fill an artificial pond, and we are not sending stormwater to the river,” Eichstaedt says.