Shelter from the Storm

The Vanessa Behan Crisis Nursery cares for 4,000 children a year 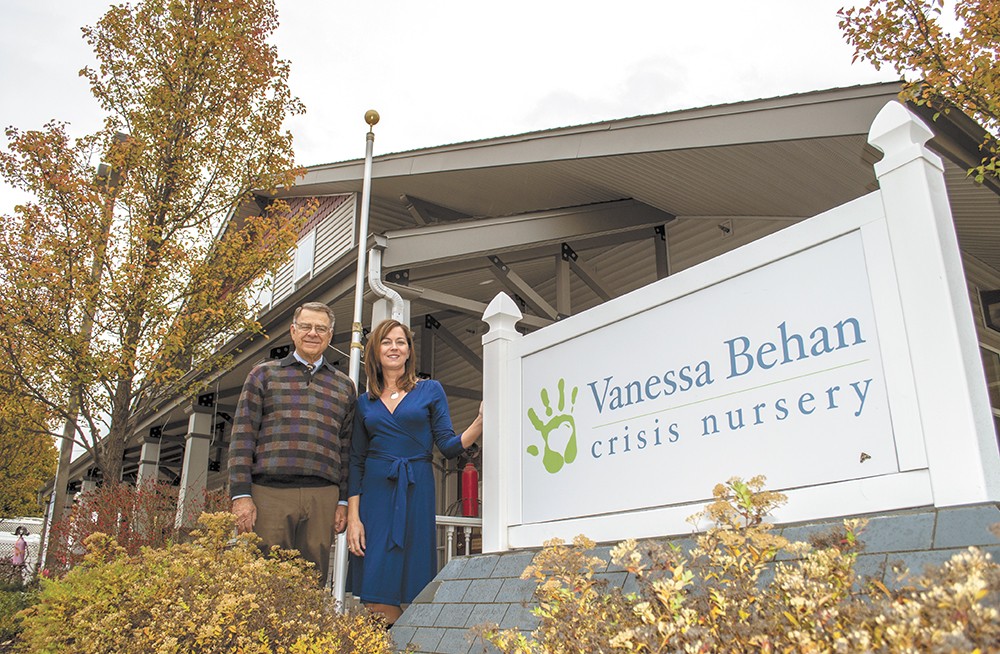 listed 2-year-old Vanessa Behan's cause of death as a ruptured bowel caused by a blow to her tummy. But that wasn't all. An autopsy revealed a fractured arm and skull, cigarette burns and head trauma from having her hair pulled and twisted. At trial, Vanessa's mother and stepfather refused to testify against each other. The case fell apart and they were set free. A Spokane father of two, Bill Bialkowsky, couldn't get Vanessa out of his mind.

"It was incomprehensible to me that someone could do that to a 2-year-old child," Bialkowsky says. "I wanted to get involved in the fight to prevent child abuse. I didn't want to see that kind of thing happen ever again."

Through friends, Bialkowsky learned of a crisis nursery in Phoenix where children from birth to age 6 could be temporarily housed in a safe and loving environment.

"I talked with the director and decided then and there I would come back to Spokane and get involved in whatever program existed like that," he says.

"But there wasn't anything."

Bialkowsky had a happy family

with two toddlers and a job in sales. He had no experience in starting or running a nonprofit. Undaunted, he researched drop-in crisis centers, gathered friends and acquaintances, formed a board and started fundraising.

"We thought we'd be able to open in a year," he says, chuckling. "It took five. On January 9, 1987, five years to the day after Vanessa died, we opened our doors. We weren't too busy the first three months, but gradually word got out, and today we serve more children in one month than we did in our first year of operation. We have taken care of over 77,000 children over the past 27 years."

By the late 1980s, the Vanessa Behan Crisis Center had outgrown its modest bungalow. A capital campaign raised the funds to build the current state-of-the-art, 12,000-square-foot facility.

Open every day of the year, 24 hours a day, the center provides refuge to an average of 4,000 children a year, offers parenting classes and directs parents and caregivers to social services agencies that assist with housing, food, transportation, day care, substance abuse treatment and more. In October, Bialkowsky received Providence Health Care's Sister Peter Claver Humanitarian Award in recognition of his contribution to the community.

Not every child who comes to Vanessa Behan is a victim of abuse or neglect. When families live in poverty or have no reliable family support, something as simple as a sick babysitter can throw a working mom's life off kilter. Maybe Grandma is in the hospital and Mom needs to spend time with her. Or the furnace broke down and while Dad's fixing it, the house is way too cold for an infant.

"We are a prevention-based facility," says Amy Knapton, the crisis center's executive director, "a place parents can turn to before they parent in a way they will regret."

In the 18 years Knapton has been with Vanessa Behan Crisis Nursery, she's seen firsthand the positive impact it has on children, families and the community.

A staff of 55, including child care workers, program staff and social workers, keeps the center humming. Hundreds of volunteers spend countless hours playing with kids, helping in the kitchen, fundraising and staffing the reception area.

"We wouldn't be here without volunteers," Bialkowsky says. "Their time adds up to a monetary value of $500,000 a year."

For an organization that relies completely on public donations to maintain an annual budget of $1.5 million, volunteers are its lifeblood.

Even though a heartbreaking tragedy is at the root of the Vanessa Behan Crisis Nursery, inspirational stories happen every year.

There's 23-year-old Kylie, who came back to the center recently to tell the staff that the days she and her three siblings spent at Vanessa Behan were the happiest of her young life. Their home was in constant turmoil, with both an alcoholic mother and grandmother, and Kylie, less than 6 years old herself, often took charge of feeding and changing her siblings.