The travails of trying to find the best seat to watch the big game. 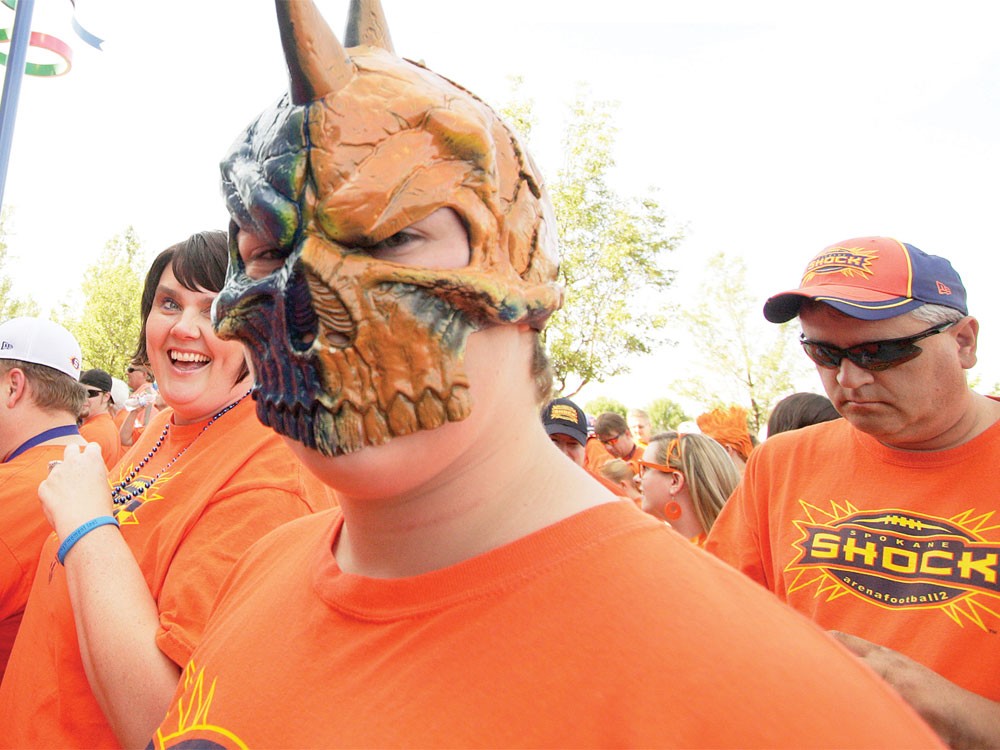 I’m not entirely sure what I expected when I ordered my tickets for ArenaBowl XXIII for “STANDING ROOM ONLY.” Perhaps a corral where we would be led and allowed to roam around, like free-range chickens. “This is your pen, and this is where you must stay,” they’d say sternly, but we’d mill around and laugh and visit and generally enjoy ourselves.

I certainly didn’t expect to be renting my own little patch of airspace, all of 18 by 20 inches. The only indication of its existence was a one-row duct-taped grid, barely distinguishable from the concrete floor, with a little “1” scrawled in Sharpie.

But I was there to support the team, our Spokane Shock. My job, such as it was, revolved solely around screaming my lungs out while simultaneously sticking my fingers in my ears in an attempt to block out the steady low hum of the vuvuzelas so thoughtfully sold by the host team.

And so I stood in my box, eagerly.

The game got off to a bit of a slow start. I scanned the crowd, noticing some of the very same people who had stood out so conspicuously while waiting in line.

Most of the fans were properly outfitted in jerseys, official ArenaBowl shirts and other Shock-branded tees. Even among the less officially authorized clothing, some managed to nail the particular garish shade of Shock orange. They looked like human Cheetos, though decidedly of the “puffed” as opposed to “crunchy” variety.

Over there, a three-pack of neon redheads stood grinning in their sea-blue shirts like buzz-cut Troll dolls in policemen’s uniforms. And over there, next to the vuvuzela-clutching headache-in-waiting, a man who either tried to paint his face Avatar-blue and misplaced his hairline, or else applied his hair dye before going to sleep and passed the night in a frenzy of macking with his beloved pillow.

What I noticed about all of these fans was their location: in seats. Standing in front of their seats, to be more precise, as if taunting those of us who lacked accommodation for our posteriors. I shifted uneasily, trying to fend off a nice-looking middle-aged couple who unilaterally commandeered three squares, forcing me into a no-man’s land ungoverned by the duct tape.

And so I stood outside my box, warily.

There was still a game going on, I think — the Napa Auto Parts ArenaBowl XXIII. A thrilling sequence, that started with a “Toyota game ball in the stands” and was followed by a pair of “Dishman Dodge first downs,” culminated in a rather pedestrian “touchdown.” Fortunately, after the YMCA Kickoff Kid grabbed the tee — and on the heels of another Toyota game ball — the Shock defense managed a Papa Murphy’s takeaway, setting up the offense for some more Dishman Dodges and ultimately another … touchdown.

It was all terribly exciting. But it was getting to be around halftime, and my legs were starting to ache. I glanced around at my fellow standees, and most of them — though cheering — appeared to be preoccupied with alleviating pain: Doubled over to ease the strain, crouching, leaning against the wall …

I glared at the Sitters, who were of course standing. How dare they take their seats for granted? How we Standers longed for the gentle cupping of our buttocks by those plastic blue thrones, sinking in to those rigid, unforgiving slabs and literally taking the load off our backs. Where they could pile their hot dogs, their nachos and their taco salads on their knees, we set our popcorn on the floor and kicked over one another’s Bud Lights.

I fantasized a coup, a hostile takeover, in which we would remove from them their laps of luxury and line them up against the wall, just as they had done to us. But they were too numerous, and we too tired.

And so I stood in my box, uncomfortably.

The rest of the game passed in a blur. The paradox of the sports fan began to assert itself. Despite the outrageous lengths you may go to acquire a suit stitched from what can only be melted traffic cones and then wave around a bloated, grotesquely lifelike orange hand, you still must subordinate yourself to the team.

Though you wish to be recognized for your devotion, ultimately it’s not about you. And when your team is on the verge of winning it all, the arbitrary divisions between fans come down. Eight-year-olds and 80-year-olds beam alike, tripping in the heady haze provided by the proximity of champions. Standers and Sitters …

I have one small confession to make: I bailed at halftime. And though the fans at my next stop were more generous with their advice to the players (“Don’t talk to the press, get your head in the game!”) and loquacious in their constructive criticism of the referees (“I don’t even know what that call means, you encephalopathic zebra!”), they cheered all the same as we watched the clock tick down and the ArenaBowl trophy being trotted out. Whether at the Arena or miles away, a “championship atmosphere” formed wherever the fans congregated.

And so I sat on my barstool, contentedly.