Footwear industries are pushing calf, thigh and butt-trimming kicks, but do they work? 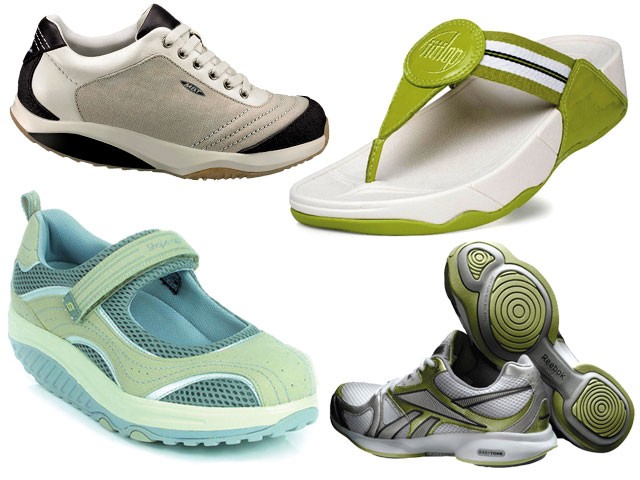 Some of the shoes that claim to be good for your muscle tone: Reebok EasyTones, MBTs, FitFlop sandals and Sketchers Shape-Ups

The camera zooms in on the bare back of a woman. She rolls around on a bed, slathered in satin sheets, wearing nothing but cut-off panties and a pair of Reebok EasyTone sneakers.

A female narrator croons in the background, telling viewers that specialty Reebok footwear, with balance-ball-inspired technology, can generate up to 28 percent more of a workout for the butt, and up to 11 percent more for hamstrings and calves — giving you better legs and a better butt — with every step.

“So 88 percent of men will be speechless, 76 percent of women jealous, and zero percent will know the reason is on your feet,” says the narrator.

It sounds dreamy. But the faddish sneakers aren’t necessarily the ruby slippers of the 21st century. For starters, the data used to support Reebok’s campaign is based on a tiny study sample — five subjects, to be exact.

All very nice — but not a shortcut to getting Heidi Klum’s thighs.

“I haven’t tried them, but I do have a couple of patients who wear them and say that they’re comfortable,” says Erin Heib, a physical therapist for U-District Physical Therapy. “Personally, I don’t think they’ll do as much as they say they’ll do.”

Dr. Paul Jones, DPM, of InStep Foot & Ankle, is also on the fence. While his clinic has prescribed shoes incorporating rocker-bottom soles for post-surgical rehabilitation, such footwear worn regularly, says Jones, has the potential to create problems.

“Too much of a good thing can be a bad thing,” he warns. “When you isolate a particular joint, you have to compensate with another joint.”

Shoes like the Sketchers, for example, work more of the ankle joint, causing certain stresses that would normally occur at the big toe to decrease. This, in turn, creates added stress to the hip and lower back.

“It’s all part of a kinetic chain,” he explains. “It’s like a brick wall. If one brick is out of alignment, the next brick has to compensate. So by the time you get to the top, the wall doesn’t stand up.”

Advertising hype aside, the manufacturer’s mechanical theory says moderate instability will create a state of slight off-balance, generating a need for the wearer to correct it.

Sketchers Shape-Ups, for example (slogan, “Get in shape, without ever setting foot in a gym!”) have a rocker-bottom wedge. The Reebok EasyTones incorporate miniature stability balls under the heels and forefoot, which supposedly encourage muscle toning. The FitFlop Sandals have a “muscle-loading, Microwobbleboard technology.” And a blessing from Oprah.

The Walking Company in River Park Square specializes in a brand called MBT: the “pro-body anti-shoe.” Designed to mimic the gait of walking barefoot on soft sand or grass, MBTs were the first type of body-sculpting footwear to hit the market.

“Your foot is not designed to walk on pavement,” says store manager Steven Smith. “This shoe is more ergonomically correct. Walking or standing, it also has an imbalance effect, so you have to use more muscle groups to correct it.”

Smith says most customers come back for second and third pairs.

And, to their credit, other brands have received positive feedback.

“I was really skeptical at first, but now I love them,” says Billie Jo King, lead tech for Sinha Orthodontics, who now prefers her EasyTones to regular shoes.

“[The shoes] make you feel like you’re walking with your toe higher than your heel, so it gives you a pull on the back of your thigh.”

Somorrow Rockstrom, a waitress at Chili’s Restaurant, was given a pair by her husband.

“He was sold on the whole butt thing,” she says.

Rockstrom, who wears them for walking, running and Tae Bo, is also following a diet and workout plan.

“But they do help,” she says. “My butt is lifted, and my hamstrings feel stronger than what they were. I do feel my calves are a little bit more toned than what they would have been if I wasn’t wearing the shoes.”

Stephanie Schulte, an employee for Medco Pharmacy, wears the Sketchers Shape-Ups. She feels the strain in her calves, upper thighs and butt.

“These shoes slant from the middle of the heel, so you’re forced to lean more towards the ball of your foot,” she says. “It helps my posture and I love them, but I wouldn’t replace exercise with just the shoes.”

Other wearers had similar reports. So, though arguably overblown, benefits may exist. But don’t go selling your Stairmaster just yet.