Where to shoot bullets, arrows and other crap. 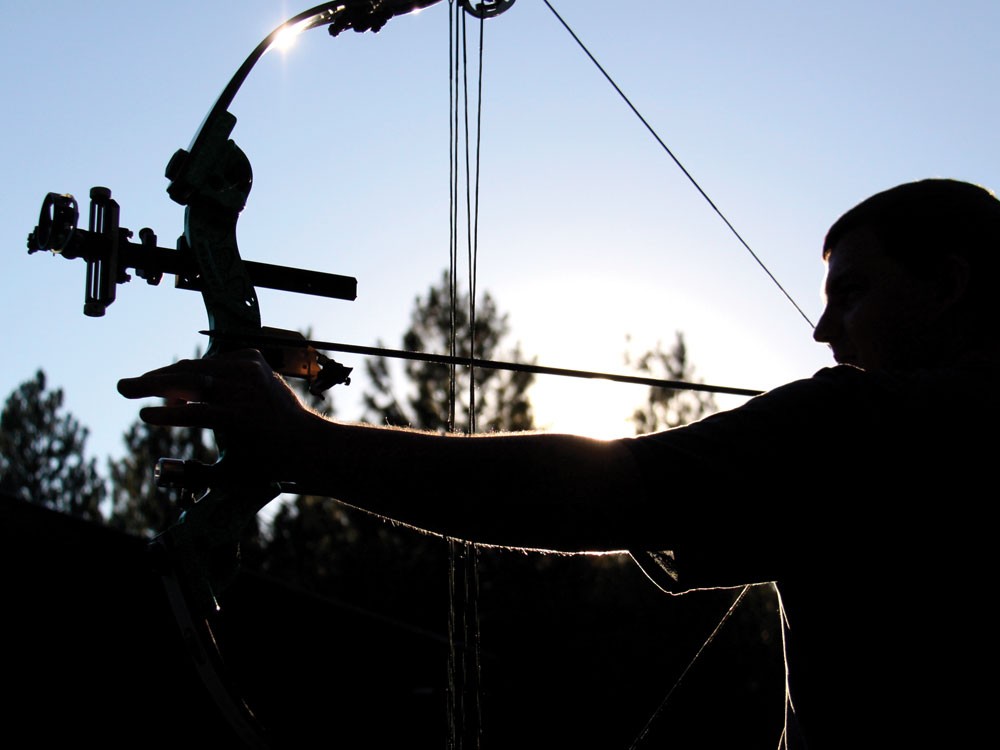 I’ll not be winning the hand of Maid Marian any time soon. Eschewing the technological advances and Blade Runner-esque styling of the compound bow (which would probably get me burned at the stake as a witch in merry olde England), I’ve opted to use a traditional bow — nothing more than some curvy wood and string.

My first arrow goes in the direction I was pointing it, which I take as a good sign. My second twangs away and barely manages to lodge itself in the very top of the target, almost a complete miss.

I recall the words of “Lady Red” (the only name she’ll answer to), the owner and proprietor of Camo'd Arrow: “We all started some place.” (Of course, she’s been letting arrows fly for 35 years and has “boxes of trophies.” She already knows how to do this.)

Shooting a bow is nothing like shooting a gun, as I discover at this little archery range in Chewelah. The operation of a gun is fairly simple, a point-and-click interface. The bow, by contrast, feels like working an abacus — an intensely physical experience that requires you to invest more in what you’re doing, rather than letting the machine perform all the work.

It helps to have experience on your side. With guidance, I’ve gone from “never having handled a bow” to “avoided missing the target altogether.” It doesn’t sound like much, but it feels like quite an accomplishment.

I actually manage to notch the arrow against the string all by myself this time. Drawing the line back toward me, I keep all the pointers I’ve been given in mind. Releasing, I watch the arrow streak down the range and embed itself inside the center circle.

Not dead-center, but close enough. Who cares if the next one barely catches the outer edge of the target? Robin Hood, eat your feathered-cap, tights-wearing heart out.


View Shooting in the Inland Northwest in a larger map

If you have a shotgun and you’re looking to unload it, you won’t find many better places than the Spokane Gun Club in Greenacres. The simple white wooden clubhouse may not look like much, but you don’t need velour seating for skeet and trap shooting. In fact, all you need is your shotgun, shells, safety gear and $6 — they’ll take care of the rest.

You want to be a member of the Spokane Valley Rifle and Pistol Club. As a non-member, you’re free to use the rifle and pistol stands (largely hidden from the road, so keep your eyes peeled). But that’s like being told you can go to the ice cream store and have all the vanilla cones you want. The members-only lower range features Hollywood-esque building fronts of a saloon, a strange building with a dragon painted on it, or a jail. Yee-haw!

Reasonably close to downtown, the Spokane Rifle Club offers the complete package for Inland Northwest gun owners. Despite being hidden between the lower Spokane River and Joe Albi Stadium (the only signage is a small rectangular affair on the chain-link fence that reads, “Danger: Gun Range”), the club is quite expansive, with outdoor ranges that allow for pistols and small-bore rifles, trap, black powder, high-power shooting and even archery.

It’s not terribly shocking that a place called Landt Farms Sporting Clays sports rusted, antique farming equipment lining the driveway. This rustic range near Nine Mile Falls offers shooting by appointment only but boasts a few unique stands (“The Pier” and “The Tree Stand”) that make the drive worth it. Watch out for nostalgia, though — the barn-red buildings might send you out back looking to put Old Yeller out of his misery.

Dan Herman is a copy editor for The Inlander. He is responsible for ascertaining that all the names of metal bands have the correct number of umlauts. He graduated from Washington State University in 2009.
Read More about Dan Herman