Local law enforcement has killed four people in the past four months. Coincidence or a sign of the future?

Young Kwak
Mourners gather at the candlelight vigil for Jeremy Groom, who was shot by Spokane Police.

Creach, 74, in his greenhouse.

“I have noticed an increase in psychiatric admissions,” says Cheryl Bilka, a nurse in the cardiac ward at Valley Hospital and Medical Center. “We’re seeing more and more patients who aren’t on their meds, probably because they can’t afford them.”

In June, Bilka admitted a man with obvious mental health issues. He refused to give up any personal belongings.

“He was hiding a pretty big knife,” Bilka says. “He pulled this knife, this switchblade, on me. He had to go to jail in shackles. He wasn’t a safe person to have around.

Young Kwak
Quentin Dodd’s mother, Neva Harris. Dodd, 50, was shot and killed by a sheriff’s deputy on Oct. 24. INSET: The piece of obsidian Dodd was carrying when he was shot.

“It’s a growing problem,” Bilka continues. “Our hands are tied. What do we do with these people? Eastern State [Hospital] is full. Sacred Heart’s full. … It’s going to get worse until somebody gets hurt or killed.”

Once, Ethan Corporon called his sister Tracy to say aliens were upstairs in his house and he had been trapped in the floor below for hours, sobbing.

Another time he told her that he was walking around his neighborhood in the middle of the night with a shotgun, trying to break into houses, because voices or aliens were telling him to do it. Recently, Ethan said his daughter, who lives with her grandparents, was communicating telepathically with him, telling him that someone was molesting her at day care.

Ethan Corporon, 29, shot and killed by Spokane police on Nov. 12. Pictured with his daughter, Cheryl.

The data research awaits approval of federal funds, which should be forthcoming by the end of the year, Pierce says.

Locally, civilian oversight and law enforcement transparency “is a long-term battle,” says local attorney Breean Beggs, who represents the family of Otto Zehm, the disabled janitor who died after a police confrontation in 2006. 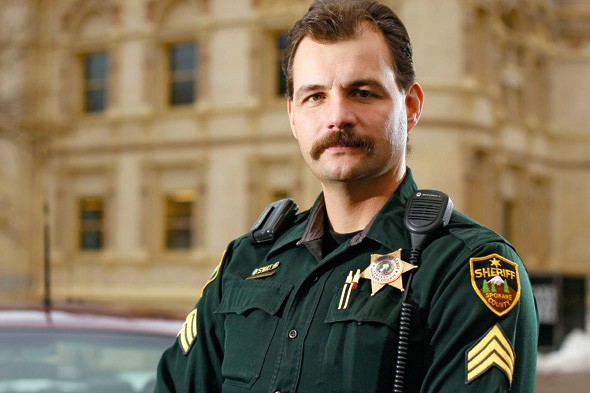 Beggs points to an incident in Seattle in August when a police officer shot and killed a First Nations woodcarver who was crossing a street with a piece of wood and a pocket-knife with a three-inch blade.

“Look at the Seattle police chief. He came out and said, ‘We are going to take a look at this thing,’ and he didn’t blame anybody,” Beggs says.

Ron Baptiste, head of the Washington State Patrol, made a similar statement after a WSP detective shot a pregnant woman. The woman had been attempting to flee while the detective tried to serve drug warrants.

“The chief of the state patrol said, ‘We will do a full investigation and look into it,’” Beggs says.

Locally, he says, there is an atmosphere of defensiveness. For example, Beggs says, Sheriff Knezovich offered an explanation of how the WSP trooper may have fired accidentally — “It’s a proven fact that when you squeeze one hand, it just squeezes the other one” — while also noting no conclusions had been reached yet.

“She says even if it’s an unmarked car, everyone knows it’s a police car,” Beggs says. “Why are you defensive? Especially when your agency is supposed to be doing the independent investigation?”

For his part, Tim Burns, Spokane’s new civilian ombudsman, has been quiet on the spate of shootings. His purview is limited to SPD, and even then, he adds, the role of his office is limited — he can’t get involved in criminal investigations. Eight to 10 months from now, when investigations into the shootings are completed, he can review them to see what lessons may be learned.

“No matter what we do, we put officers in a no-win situation,” Burns says. “I would suggest overall, they perform exceptionally well, based on their training and what they know at the time.

“I think one of the more important roles I play is to look at these things in-depth. And we are going to, as they become available,” he says.

In the meantime, Knezovich feels like he’s the only local leader talking about these issues. Prosecutor Steve Tucker isn’t, nor are many other elected officials. “I’m tired of being the lone voice,” the sheriff says.

Instead of the community thoughtfully discussing law enforcement, mental health and public safety, Knezovich says the conversation is dominated by those on the fringes: cop-haters and those who believe people in uniform can do no wrong.

“Frankly, there’s a culture here. It’s a culture of, ‘Don’t talk to the media’ … a bunker mentality,” he says. “The only people that talk about these issues are at the extremes.”

As the hour of the candlelight vigil approached, people began to shoulder together in the slippery parking lot of the Special K Tavern, the place where 34-year-old Jeremy Groom was shot and killed by Spokane Police on Dec. 4.

A gentle rain began to fall.

His family felt it important to return to the site and hold a vigil to let everyone know that while Groom died with a gun in his hands, he was not some violent thug.

“Jeremy was the kind of person who would give you the last shirt off his back,” his cousin Crystal Groom says. “He lived his life all about laughing and enjoying it.”

The Inlander is committed to exposing miscarriages of justice. Send tips and story ideas to injustice [at] inlander.com or call the news tip line at (509) 325-0634 ext. 264.

Jacob H. Fries is the editor of the Inlander. In that position, he oversees editorial coverage of the paper and occasionally contributes his own writing. Before joining the paper, he wrote for numerous publications, including the Tampa Bay Times, the Boston Globe and the New York Times. He grew up in Spokane Valley...