Spokane's sheriff calls out Oregon occupiers; plus, an "accidental" shooting is under investigation 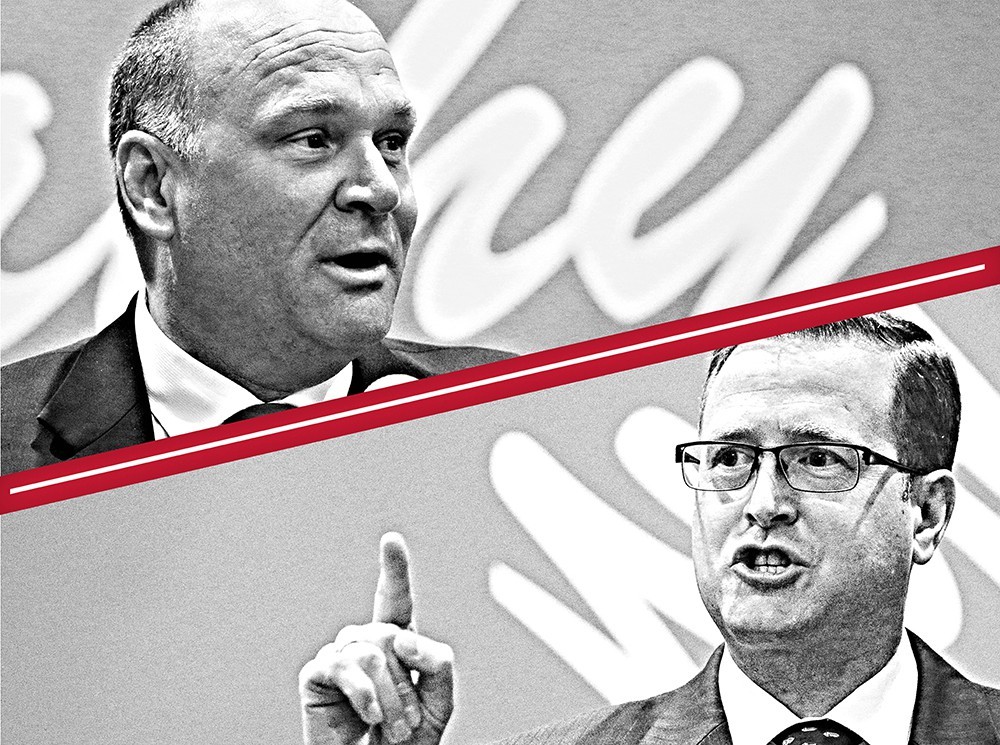 Sheriff Ozzie Knezovich (top) is speaking out again on right-wing extremism like that peddled by Rep. Matt Shea (bottom).

Spokane County Sheriff Ozzie Knezovich made waves last summer with his "THE THREATS WE FACE vs. The Myth of Police Militarization" presentation, in which he criticizes far-right extremism.

On Monday night, Knezovich gave a remixed version of his talk. This time, his defense of police militarization received considerably less play. Instead, he devoted new focus to the threat of ISIS and radical Islamic terrorism: "ISIS is a current and active threat to the safety of Spokane County," one slide in his presentation said. Knezovich says he met with the Council on American-Islamic Relations, and while he agreed that many Muslims fight against radical extremism, he says he urged the group to denounce radical Islam more vehemently. He condemned the protests and looting in Ferguson, Missouri.

"Ferguson spawned a lot of negative stuff, folks," Knezovich says, "and it was based on a lie."

But right-wing extremists didn't escape Knezovich's fire either: A considerable chunk of his two-hour presentation lambasted the armed protesters who have occupied a wildlife refuge in eastern Oregon. In particular, he defended the local sheriff and the FBI's role in handling the protest.

In a Q&A session after his speech, Knezovich weighed in on concerns about the city of Spokane being called a "sanctuary city" for its policy of not asking about immigration status, arguing that the problem is with the federal government, not the locals.

"You live in a sanctuary country," Knezovich says. "The administration is not enforcing those laws."

One audience member asked Knezovich why the Spokane mayor and city council didn't seem to be interested in letting Knezovich run the police department.

"I'll just say what my barber said," the mostly bald Knezovich said, assuring the chuckling audience that he did indeed have a barber. "'Sheriff, they couldn't control you.'" (DANIEL WALTERS)

Spokane County Sheriff detectives are investigating a shooting death that occurred in the 14100 block of East Sinto Avenue in SPOKANE VALLEY.

Around 9:45 am Monday, a man called 911 saying his wife had been shot. Dispatchers could hear the man tell his wife to keep breathing. Neither the man nor his wife have been identified, but local media reports indicate that the husband has law enforcement training as a military policeman in the Army. He continues to serve as a reserve deputy with the Lincoln County Sheriff's Office.

Instead of waiting for an ambulance, the man drove his wife to Valley Hospital, where she died of a gunshot wound to the chest.

Spokane County Deputy Mark Gregory says forensic investigators and Major Crimes detectives are currently collecting evidence and conducting interviews. The man is cooperating with the investigation and has not been arrested or charged with a crime. (MITCH RYALS)

Cities and counties would need public approval before banning licensed MARIJUANA STORES in Washington, according to a bill approved this week by the state's House Commerce & Gaming Committee.

The bill was sent to the full House on Monday. It would mandate that local governments put a proposed ban on a special or general election ballot before it can go into effect. Citizens could also put an initiative banning pot on a ballot if 30 percent of a city or county's voters sign a petition.

The ballot measure legalizing marijuana in the state, I-502, does not address whether state law displaces local ordinances or regulations of marijuana-related commerce. Approximately 88 cities and eight counties have enacted a prohibition or moratorium of state-licensed marijuana producers, processors and retailers, according to the Municipal Research and Services Center of Washington. (WILSON CRISCIONE)