The cost and benefit of logging off 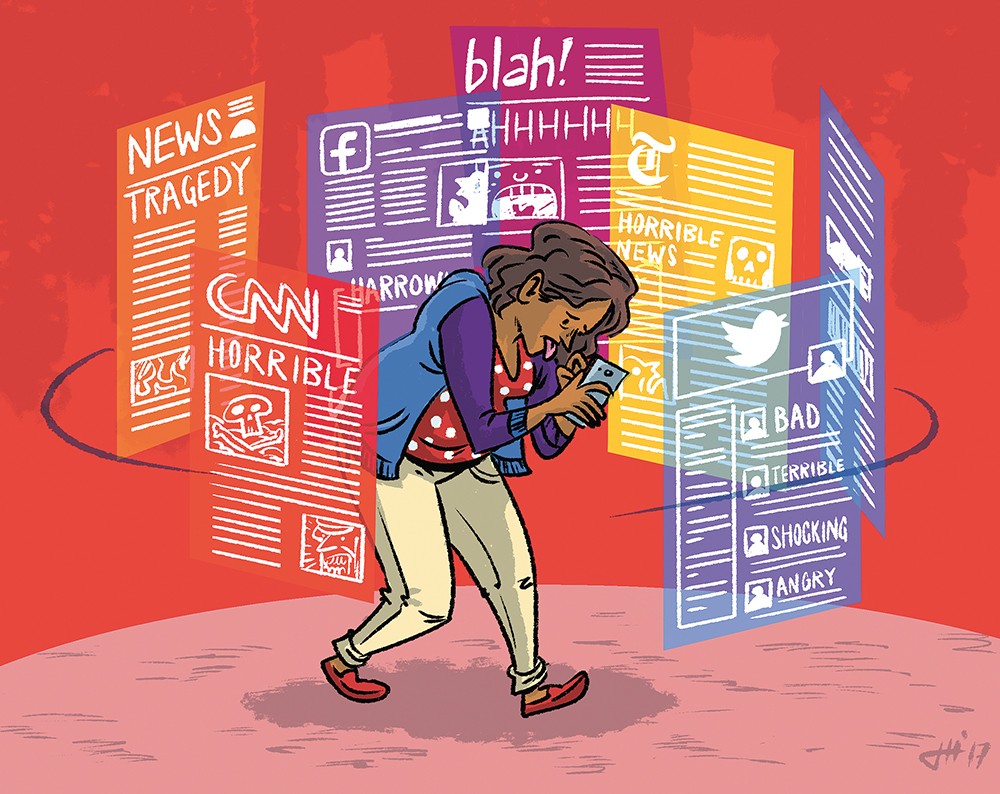 Jonathan Hill illustration
Americans, on average, spend more than 10 hours a day in front of a screen.

but its depiction of people who are overexposed to digital media endures: adult-sized babies in Hoverchairs drinking their meals out of cups, eyes glued to holographic screens. WALL·E implies that a dystopian future awaits us unless we "unplug," or set some healthy limits on how often we're tethered to a device, browsing the internet and tending to our social media.

Some experts argue that we're already living that dark reality: Americans reportedly spend more than 10 hours a day, on average, in front of a screen and check their phones nearly 50 times a day. (Apple says that iPhone users unlocked their phones an average of 80 times a day last year.)

Yujung Nam, a Washington State University professor who studies social media from a health communications standpoint, says that actual numbers may be even higher.

"People underreport how much they check their devices," Nam says, "Almost like an addict hiding their bottles. They'll say, 'Maybe 30 times, 40 times,' but when we ask them to download an app [that measures that number] for studies, it's usually about three times more."

According to a 2016 CNN analysis, in each week's 168 hours, people generally spend at least 40 hours working, 49 hours sleeping and 21 hours on personal care, leaving about 58 hours for everything else — quality time with loved ones, to-do's, hobbies, etc.

Recall that Americans spend more than 50 of those remaining hours on TV, phones and the internet — likely sedentary — and we can see why a kids' movie is begging us to unplug now and again.

See: The 13 million views on comedian and television personality John Oliver's "F--- 2016" episode; terrorist attacks worldwide and the Syrian civil war; Brexit and the caustic U.S. presidential election; the outbreaks of the Ebola and Zika viruses; and the deaths of Muhammad Ali, Prince, David Bowie, Carrie Fisher, and so many more. Even clown panic made an appearance.

But for many Americans, the election (and the presidency, for half of American voters) was more than a bad blip on the radar — it was a revelation. As we scrambled to stay informed and keep up with the endless stream of scandals, "fake news," actual fake news and the tweets, we finally felt the weight of those 50 hours a week and the absence of whatever we did before.

This year's "Stress in America" survey agrees: The majority of Americans are worried about the future of this country. The overall stress level rose from 4.8 to 5.1 on a 10-point scale, the first significant increase in the decade since the American Psychological Association began surveying; 57 percent of Americans call the current political climate a very or somewhat significant source of stress.

One of the culprits? A news cycle nearly impossible to ignore and stories difficult not to discuss or rant about on social media, says Dennis Anderson, a senior lecturer in Psychology at Eastern Washington University.

"Bad things make news," Anderson says. "Nowadays, you can have 24/7 exposure to [negative content], whereas years ago you might have been exposed to it in the morning paper, or on the radio, and that was it. If you leave yourself exposed to it, you can easily get overwhelmed by it."

A therapist for more than 20 years, Anderson says this stress is actually good — it means we're listening to our bodies, and they're saying our media habits aren't making us happy anymore. He regularly recommends that couples have daily hours dedicated to non-screen time together to combat distracted dinners.

"When I talk to people about worries, one of the first things I ask is, 'Is it a non-productive worry or a productive worry?'" he says. "Anxiety is a great thing because it means you're anticipating a future threat, and it's a helpful emotion if it's productive — if there's something you can do about it."

Amy Gregg is definitely doing something about it.

She abstained from Facebook and limited her news intake for Lent to focus on her spiritual and physical self. Gregg realized recently that she spends most of her free time on Facebook or "listening to the news on NPR and getting worked up" and knew it was time to unplug.

"That got me thinking, gosh, I'm not doing very much to feed myself, to feed my soul..." Gregg says. "I thought, 'What would it be like for me to be putting positive things in?' I've been feeling... just bombarded with news and negative thoughts; what would it be like to give myself more space?"

She didn't use Facebook much before 2013, when she developed a chronic illness that keeps her mostly at home; soon she was on Facebook at least three hours daily, reading friends' responses to articles, then reading the article, then articles on similar topics... and down the rabbit hole.

"I think it almost became kind of an addiction," Gregg says. "The little numbers [on Facebook], the notifications — five people said something, so I better see what they said!"

Nam, the WSU health communications professor, explains that we "respond in a very biological way" to those likes, retweets and comments; our brains release dopamine every time we get that validation, she says, so we get addicted to the positive — and crushed by the negative.

"When people don't pay attention, you don't have 20 likes within 40 minutes, research shows that people have inflated perceptions of how bad [that is]," she says. "The frequency is linked directly to negative self-esteem... feeling distressed, feeling anxiety, to a medical impact on your health."

Since Gregg unplugged, she's had "actual face-to-face time" with friends, tried Christian meditation and started reading again. She only logs onto Facebook to chat, and her record so far is 20 unopened notifications. "I've kind of been enjoying watching the numbers build up," she says, laughing.

"Unplugging" does not mean "never plugging back in again,"

as Casey Cep argues in her 2014 New Yorker article, "The Pointlessness of Unplugging." One-day digital detoxes like the National Day of Unplugging aren't a substitute for healthy limits, but they can keep your eyes off a screen long enough to notice the difference.

Nam emphasizes that digital media isn't unhealthy on its own, but overexposure is — even CNN anchor Anderson Cooper mutes President Trump on Twitter, saying, "I just don't want to have that drama in my life."

And there are real benefits to being "plugged in." Nam has a live Twitter feed for students to ask questions in class, and students who formerly never raised their hands for fear of public speaking are engaging and talking in class. In her research, she's seen people with chronic illnesses find and support one another over social media, and even seen how virtual reality headsets allow stroke victims to practice physical therapy at home.

It's no longer the "online world" versus the "real world," Nam says. These devices were always supposed to help us learn, connect and create. We just need to remember that technology is a tool, and we can always unplug. ♦

A version of this article first appeared in the Inlander's InHealth magazine.