Show Me the Money

Where local donors are putting their cash this campaign season 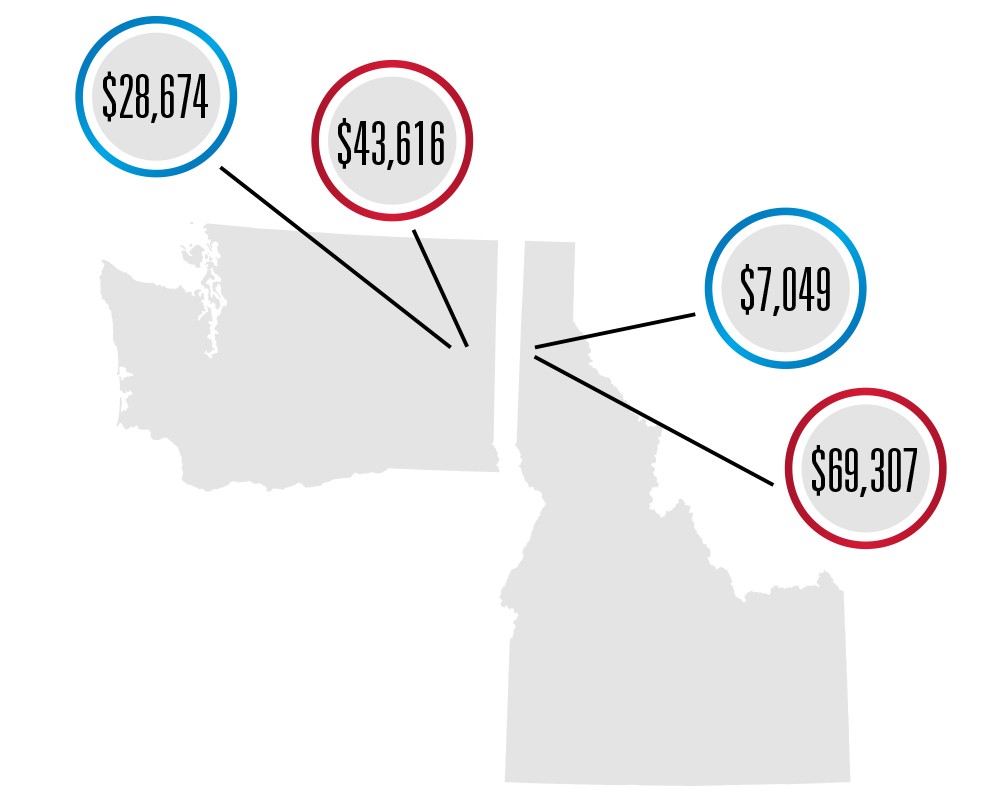 The 2016 presidential election is expected to be the most expensive ever,

with some estimates predicting campaign spending to top $5 billion. That money will range from small donations to million-dollar checks from across the country. Some of that money is coming from local sources.

Donors in the more affluent Puget Sound area already have given millions to presidential candidates. Eastern Washington hasn't even topped $100,000. In North Idaho, that number is $76,000.

In Spokane and nearby areas, donors seem to like Democratic presidential candidates Bernie Sanders and Hillary Clinton about the same. According to the most recent filings with the Federal Election Commission, both candidates have raised $14,000 from local donors. In North Idaho, Sanders has raised about $5,000 and Clinton $1,200.

In Spokane, Don Barbieri, the former CEO of the Red Lion Hotels Corporation who ran unsuccessfully for Congress in 2004, gave $300 to Sanders, according to FEC filings. His domestic partner, Sharon Smith, gave $137. Barbieri says he and Smith donated to Sanders because of his emphasis on living-wage jobs, infrastructure and stances on foreign policy, and because they're unimpressed with Clinton.

"She seems to be putting her finger in the air and seeing which way the wind is blowing," he says.

The Confederated Tribes of the Colville Reservation doesn't see it that way, giving $2,700 to Clinton, whose campaign has made outreach efforts to tribes. Tribal Chair Jim Boyd says he doesn't remember why the Colvilles donated to Clinton.

Ben Carson, a retired neurosurgeon running for the Republican nomination, has received more local donations than any other candidate. He's received more than $17,000 from the Spokane area and nearby (many from retired people) and about the same amount from North Idaho donors.

Sen. Ted Cruz, a Texas Republican seeking his party's presidential nomination, has the second largest pile of local money. He raised more than $15,000 in North Idaho, $300 of which came from Eric Redman, a conservative state representative from Athol who didn't return a call seeking comment. In the Spokane area, Cruz has raised just under $10,000. Spokane County Prosecutor Larry Haskell's wife Lesley, who has drawn fire for her online comments regarding Muslims, donated $135 to Cruz. She also didn't respond to an inquiry seeking comment.

Kentucky Sen. Rand Paul, the only declared presidential candidate to visit the region, has raised about $12,000 from locals. Republican frontrunner Donald Trump has only received $750 from the Spokane area and $2,000 from North Idaho. ♦