Show Them the Money 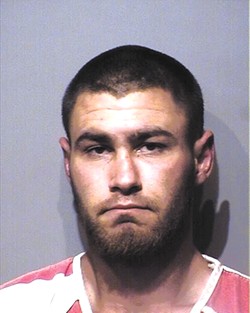 The Kootenai County Prosecutor's Office has not spent a single cent on the capital case against Jonathan Renfro, according to the prosecutor's project expense report, a document that shows what money has gone toward specific office expenditures.

Renfro is accused of killing Coeur d'Alene Police Sgt. Greg Moore on a dark residential street in May 2015. He is also charged with grand theft, robbery, concealing evidence, removing a gun from a cop and eluding police, and has pled not guilty to all charges.

"It benefits his office financially to charge death, as opposed to a life sentence, because he doesn't have to spend his approved annual budget on it," Adams says. "That's unconstitutional, because you can only seek the death penalty based on circumstances of the crime and the individual defendant."

In addition to the "zero" spent on the Renfro case, Adams pointed in court to $217,489 that Kootenai County has received since October 2013 from the Idaho Capital Crimes Defense Fund, a pot of money set up by the state legislature to supplement the cost of death penalty cases. He also pointed to the approximately $83,000 in the prosecutor's budget for witness expenses this fiscal year.

Money from the Capital Crimes Defense Fund is intended to offset defense expenses in capital cases. Adams is concerned that money is being dumped into a general "justice" fund and is then allocated to the prosecutor's office. If Kootenai County Prosecutor Barry McHugh was seeking a life sentence, Adams argues, he would not get money from capital crimes fund. Brannon could not say where, exactly, the money from that state fund went.

"We want to know where the prosecutor is getting the money," Adams says. "It's coming from someplace, and we were asking the judge to make the prosecutor tell us and the public where."

Adams says he filed a public records request with the prosecutor's office, which was denied. He then asked the court to compel prosecutors to turn over their funding source.

It's well established that the death penalty is an expensive endeavor — far more so than the cost of seeking a life sentence, according to a 2014 report from the Idaho Joint Legislative Oversight Committee. Research from Seattle University law professors also found that death penalty cases in Washington state cost about one-and-a-half times those where the death penalty is not sought. The study reviewed 147 aggravated first-degree murder cases in Washington since 1997.

Idaho's Capital Crimes Defense Fund was set up in 1998 to help defray costs in death penalty cases. Every county in Idaho, except Jefferson County, can voluntarily contribute to the fund annually and on a per capita basis. Then, public defenders can apply to draw money back out of the fund to help offset their expenses.

Since the fund was established, Kootenai County has been paid $217,470 for two cases, according to data provided by the Idaho Association of Counties. The first was the case of Angel Morales-Larranaga, who was eventually sentenced to life in prison without parole for strangling his wife and stepdaughter in 2014. The second is the Renfro case. Since 1999, the fund has paid at least $4 million to various counties in the state.

In 2013, after two prisoners who were sentenced to death were released in 2001 and after two people were executed within two years following a 17-year drought, the Joint Legislative Oversight Committee conducted a study into the state's use of capital punishment.

The study could not definitively identify a total death penalty cost in Idaho because "only minimal cost data were readily available, and comprehensive cost data were nearly nonexistent." However, the study of 251 defendants charged with first-degree murder from 1998 through 2013 found that very few people were actually sentenced to death, and even fewer are actually executed.

Prosecutors sought the death penalty in 22 percent of eligible cases in that time frame.

Currently, nine people are awaiting execution in Idaho. Since 1977, the state has sentenced 40 people to death, but has only executed three.

Washington Gov. Jay Inslee declared a moratorium on executions in 2014. There are currently nine people on death row in Washington. ♦