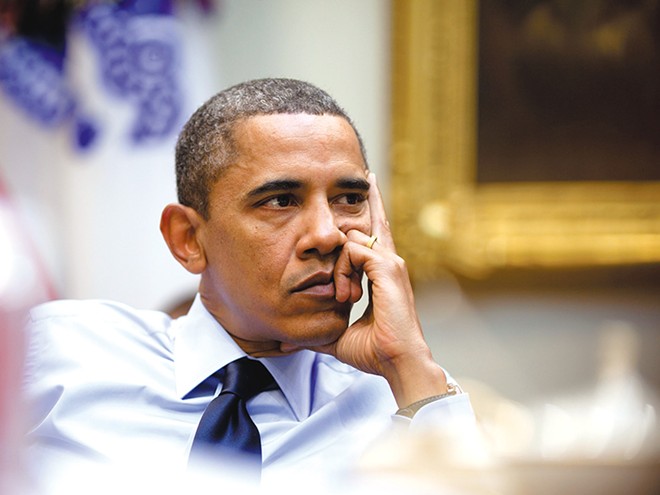 Every day, Amy Robinson and her husband down a cocktail of prescription drugs — antidepressants to battle their anxiety and pain pills to dull their chronic discomfort. Robinson has fibromyalgia, but she can't afford to see a physical therapist. Her husband has asthma, but he can't afford an inhaler. About two years, Robinson's husband contracted bronchitis. It got so bad, he developed pneumonia in both lungs. They should have taken him to the hospital, but they didn't know how they'd pay for it. Their only option is $150 worth of medications from Costco.

Amy prays they don't get worse.

"What if something happens to me and I have to go to the hospital?" she says. "We've put a Band-Aid on the problem. Everything comes down to money, and we can't afford it."

As thousands of people across the country began enrolling in health care coverage under the Affordable Care Act last week, millions of poor Americans, including Robinson and her husband, won't see any of the promises of President Obama's sweeping health care law fulfilled.

That's because Idaho is one of 26 Republican-controlled states that have so far declined to expand Medicaid under ACA, leaving as many as 75,000 people in the state uninsured and ineligible for financial assistance under the health care law, according to a Kaiser Family Foundation study.

In Idaho, 222,533 people, 17 percent of the population, are uninsured. As in the rest of the country, the majority of them are low-income working adults like Robinson. Expanding Medicaid in Idaho would provide free health insurance to nearly half of them.

"The Affordable Care Act was designed to give a path to affordable coverage to all Americans," says Lauren Necochea, director of Idaho KIDS COUNT, a nonprofit research center on children's issues.

When the U.S. Supreme Court upheld the Affordable Care Act last summer, the justices barred the federal government from requiring states to expand Medicaid eligibility. Now, by the New York Times' count, as many as 8 million people across the country making less than the federal poverty level are stuck without any affordable options and with no fix in sight: They don't qualify for Medicaid under current state laws, and they earn too little to receive tax subsidies to help them pay for health insurance purchased through the exchanges.

Under ACA, individuals earning between 100 and 400 percent of the federal poverty line (or $11,490 and $45,960, respectively) who purchase insurance in the online exchanges can apply for tax-credit subsidies to offset the cost of their plans. The law intended to provide Medicaid coverage to anyone making up to 138 percent of the federal poverty line (about $15,856 for an individual).

Five years ago, Robinson, 37, and her husband, Jeffrey, 42, were working in Olympia — she in retail management and he as plumber — and taking home nearly $100,000 a year. In early 2009, Robinson was laid off. Six months later, her husband lost his job too, and their income was instantly halved, and their house soon slipped into foreclosure. So they moved to Caldwell, Idaho, west of Boise, to start over and live a little cheaper. They poured every penny of their savings into Jeffrey's plumbing career, but it never took off.

Now the Robinsons are both taking classes at Treasure Valley Community College, hoping to once again reinvent their careers. Robinson makes roughly $1,000 a month working part-time jobs as a school bus driver and a family support specialist for the nonprofit Idaho Federation of Families for Children's Mental Health. Her husband just started a part-time job as a welding teacher's aide. Between her two jobs and their student loans, her family's annual income is just under $25,000 — that puts her household of seven at 70 percent of the federal poverty level.

When Robinson logged into Idaho's health insurance exchange website, she found the cheapest and lowest coverage plan she could purchase through it would cost $620 a month with a $6,500 deductible. The most expensive? $1,300 with a $1,000 deductible. She doesn't qualify for any subsidies.

And it's the uninsured, lacking access to regular and preventative care, who often need health insurance the most. The nonprofit advocacy organizations Families USA estimates that two Idahoans die every week because they delayed or went without necessary medical care due to a lack of health coverage.

"If you don't have coverage or a usual source of care, you live thicker and you die younger," says Dr. Ted Epperly, CEO of the Boise-based Family Medicine Residency of Idaho. "If you wait and things get worse instead of better, then it could mean hospitalization. Suddenly now that's $20,000 [in medical bills] and that's where people end up going bankrupt."

Robin Evans, from tiny Grangeville, Idaho, works three different low-wage, part-time jobs. She brings home less than $13,000 a year to support herself and her husband, who suffers from a heart condition. (They don't know what it is because they can't pay for any medical tests.) She hasn't had health insurance since she lost her job working with developmentally disabled people about five years ago. About a year ago, after experiencing long bouts of intense pain, Evans finally checked into the emergency room at a nearby hospital. She had a kidney stone, about half the size of a cigarette butt. Between her ER stay, CAT scan, shockwave procedure to remove the kidney stone and visits with a urologist in Lewiston, Evans now has $27,000 in medical bills hanging over her head.

"I don't have insurance. I live paycheck to paycheck. I'm not making any payments on this," she says.

Epperly sees two solutions to Idaho's health coverage gap: Either expand Medicaid or raise minimum wage so more people can afford insurance. Idaho leads the nation in its share of hourly workers making as little as $7.25.

"Something's gotta give here," he says. "This really boils down to dollars and cents in many ways."

President Obama's health care reform law is a politically volatile issue in Idaho, where, in 2010, Republican Gov. Butch Otter became the first state executive to sign a law authorizing his attorney general to sue the federal government if residents are required to buy health insurance.

Otter, however, has since moderated his position on Obamacare; he's still against it, but he's willing to make the law work on Idaho's terms. He formed a workgroup of public and private stakeholders to study the state's Medicaid options, and twice the group unanimously voted to expand Medicaid.

According to the consulting firm Milliman, hired to study the issue, Medicaid expansion would result in a net savings of $9.8 million between 2014 and 2024. A big chunk of those savings comes from the assumption that the state and counties will spend less on services for the medically indigent, 90 percent of whom would be eligible for insurance coverage through expansion.

Last session, Idaho state lawmakers spent more than 15 hours on the floor debating (and eventually passing) the creation of Idaho state-based health insurance exchange. It was the longest debate Rep. John Rusche, D-Lewiston, remembers in his nine years in the Legislature. In March, the House Health and Welfare Committee voted unanimously to introduce a pair of bills that would expand Medicaid eligibility and repeal the state's catastrophic health care fund. But state leaders refused to give the bills hearings.

"I'm also afraid it's too hot of a political issue for Republicans to allow it to come up, because the party legislators are very conservative and won't have anything to do with Obamacare," he says. "If you're a moderate Republican in a swing district and you vote for Obamacare, you can pretty well guarantee someone is going to run against you in the primary coming from the right side of the political spectrum."

Meanwhile, people like Robin Evans are frustrated about their lack of options for affordable health care.

"Obamacare isn't helping those that need it the most," Evans says. "We're not looking for somebody to hand us something for nothing. We're just looking to survive. We just want a hand up. Between the Idaho state legislators and the federal government, I don't know. It seems like it's getting harder and harder and harder." ♦