At Lake City, Alyssa Day makes "Don't Cry for Me" sound just as good as we remembered. 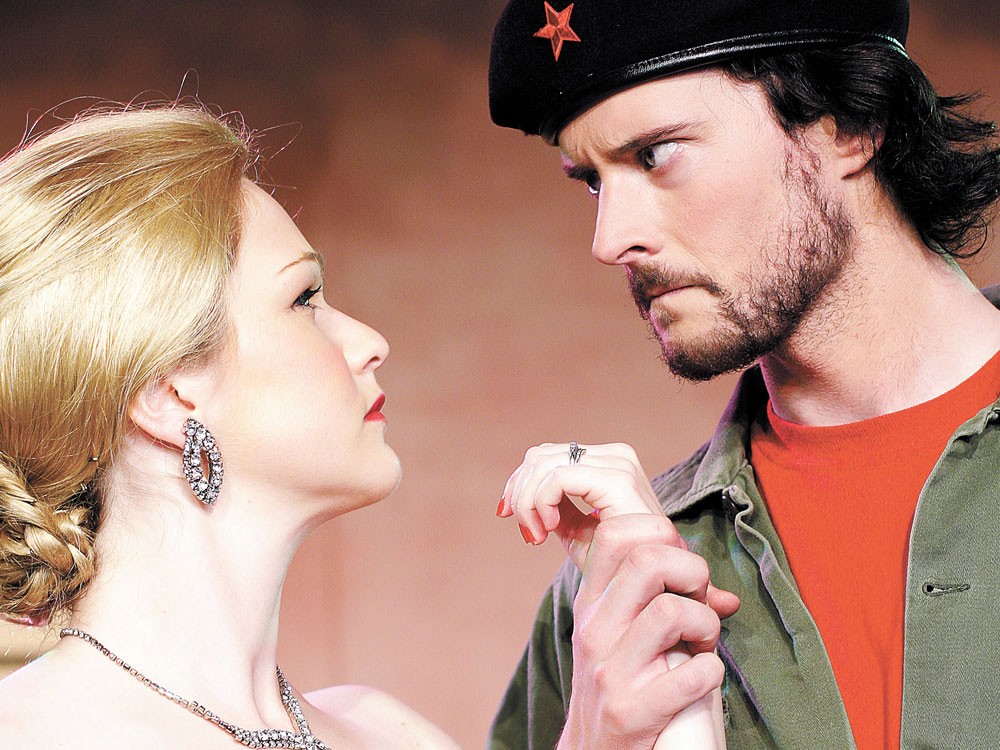 They're the moments when you hold your breath. They’re the big solo dramatic songs in musical theater: “The Impossible Dream,” “Bring Him Home,” “Send in the Clowns,” “Rose’s Turn.” Everybody knows the tune, everybody’s hoping for good but fearing they’ll get less, and no one’s really expecting tonight’s performance to live up to any ideals.

Singing the title role in Andrew Lloyd Webber’s Evita (at Lake City Playhouse through Oct. 10), Alyssa Day appears early on as the young, dark-haired social climber. Day briefly sings “Don’t cry for me,” but director Abbey Crawford turned it into a trio with two other women, and it didn’t have the big buildup that the set-piece aria gets early in the second act.

(Everybody knows the big moment arrives soon after intermission.)

So the political-rally scene finally arrives, and Day comes out in her glittering white princess dress, and she holds hands with her husband, Juan Peron, and a dozen people in the crowd are clamoring for her, and she ascends her little rostrum, and she sings the opening two warm-up verses (“I had to let it happen, I had to change“), but those are just for building up suspense, and then she hits the chorus (imploring the people not to cry for her, when you know she really wants them to cry for her), and she hit it solid, she really knocked it out of the park — she spread her arms wide and created moments of vocal beauty, and you could feel the relief and the happiness in the audience, that whatever shortcomings this production might have (and it has them, how could it not?), the ticket-buyers could go home feeling that “Well, they got that right, they got Evita’s big highlight-reel sequence right.”

And then a remarkable thing happened. The chorus had been chanting Evita’s name, but now they were humming along. Day, though, remained facing forward, facing the audience, as if we were the shirtless ones, Evita’s beloved descamisados. And several playgoers seated near me started humming along — even the husband who’d been dragged along by his wife — he was humming too.

But let’s not get carried away here. This is still a community-theater production of Evita. The big emotional crescendos sometimes sound tinny (and lacking in fullness) when performed by just two keyboards, guitar and drums. Dance steps were often predictable, hesitant, over-crowded. In the narrator role of Che Guevara, Todd Kehne lacks vocal power. Almost nobody onstage looks even vaguely Hispanic. Long stretches of Act Two lean too much on politics and not enough on melody. Both the stage direction and the musical direction opt for an overly deliberate pace.

Still, with the performance of Day as Evita — along with Kent Kimball’s stentorian Perón and Dan McKeever’s amusing Magaldi — Lake City’s 50th season under new executive artistic director George Green is off to a very promising start.