Signs of the Times

Can Spokane really curb the demand side of the sex trade? 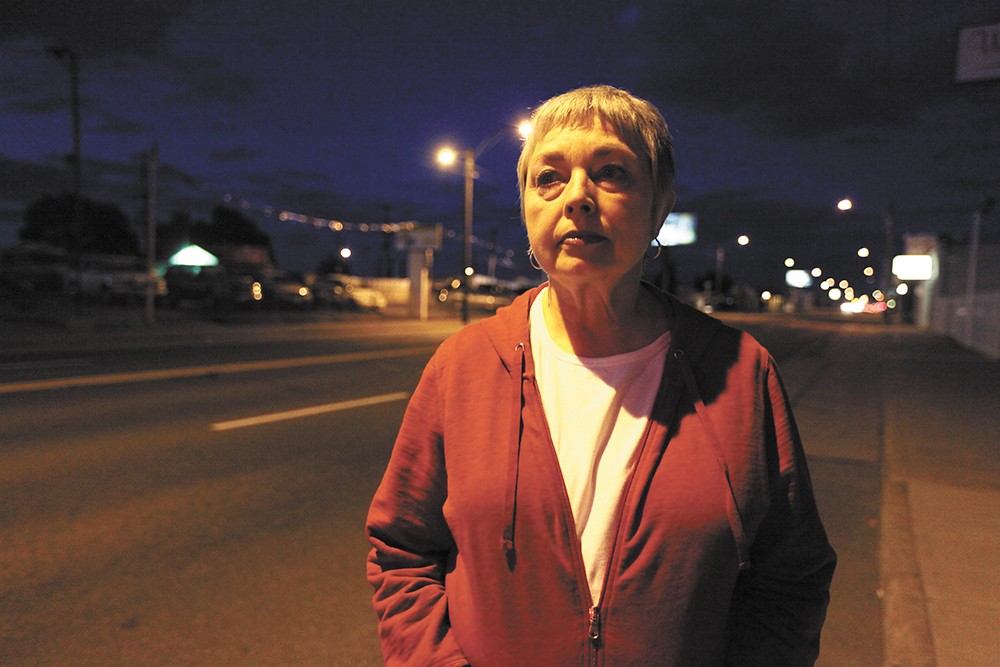 to know what goes on at night along East Sprague Avenue. It just has that look. The cheap motels with retro neon signs. The car dealerships. The dark and vacant sort of sidewalks that don't invite pedestrians. This is where you go in Spokane if you're trying to buy sex.

But the city is trying to change that: Last month, officials posted, along East Sprague between Hamilton and Fiske streets, towering signs that read "Designated Area of High Prostitution Activity. Vehicles used to further prostitution will be impounded."

Since the signs went up, the Spokane Police Department has arrested three suspected johns and impounded two cars, all during an emphasis operation on March 18. Only one of the men paid the $500 fee and impound costs to recover his vehicle; the other man's Honda Civic is still sitting at the tow yard.

Even though there haven't been arrests since then, police spokeswoman Monique Cotton believes the signs are working. The week following the emphasis operation, there were 11 calls for service to East Sprague. The next week there were five. Last week it was down to four.

Cotton says prostitutes may even be leaving Spokane entirely.

"I received a call from a reporter in Missoula, Montana, because they had an influx of prostitutes with Spokane addresses," says Cotton. "They had three significant arrests that they mentioned, but there may be more. To us, that made us go 'Huh?' Missoula wanted to know what we were doing over here."

Missoula Police Department Public Information Officer Travis Welsh says the city is not experiencing an influx of prostitutes. "We have had some cases of prostitutes from Spokane, but it's nothing new; it goes back as long as I've been here," he says.

Meanwhile, advocates worry that the city's plan could put the survival of sex workers who frequent East Sprague in an even more precarious position.

"I'm always afraid when they do these enforcement efforts that it will drive people to engage in more dangerous sex work, to meet up with people in a private place," says Erin Williams, Lutheran Community Services' director of advocacy and prevention. "A place where health workers can't find them, where they are not connected to resources in the same way. I'm curious to see how it will play out."

Spokane Regional Health District needle exchange coordinator Lynn Everson is one of those health workers. She does outreach work on East Sprague every Wednesday night, handing out bags filled with lube and condoms and a list of men to avoid. If the women move to an area where Everson can't find them, they might not be able to afford condoms that week. Which doesn't mean they won't work; just that work will be even riskier.

"Women will often work on back streets, and it is so much less safe," says Everson.

The women of East Sprague are living day to day. They don't have savings, untapped resources or a backup plan. There are already fewer than there used to be, Everson says. In the early 1990s, she would see as many as 35 women working the area. These days, it's down to 10.

Though criminalizing the demand side of prostitution didn't become popular until recently, some countries have been doing it for years. Sweden and Canada are the examples most frequently mentioned by sex workers' rights activists who worry that cracking down on demands pushes prostitutes further into the shadows. When johns are the enforcement focus, women selling sex simply move to locations where clients will feel safe picking them up.

Spokane City Council President Ben Stuckart acknowledges that the industry may just migrate elsewhere. If that "elsewhere" is far away, wonderful. If it is another part of Spokane, the city is prepared to address that, possibly by designating additional areas of high prostitution activity. The crackdown on prostitution is a precursor to an investment of $32 million in the neighborhood in coming years.

"We're going to invest millions of dollars in that corridor, but if you don't take care of the prostitution, it doesn't matter how much you spend on the infrastructure, you're still going to have the problems," says Stuckart.