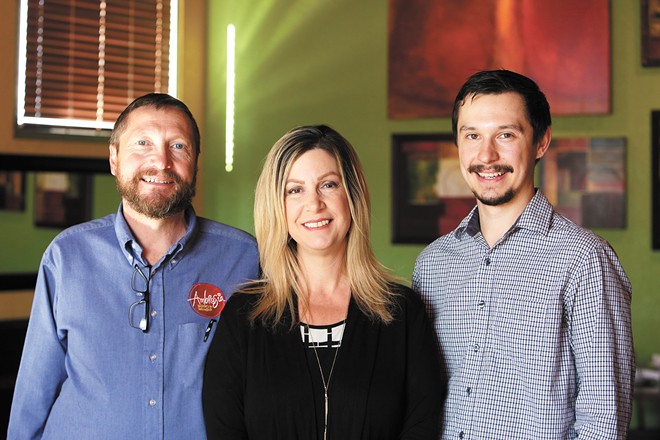 Restaurateur Scott Cook spent a number of years as a managing partner in Chili's Bar & Grill, but in 2006 he started looking for a change. He'd been doing legwork for a friend trying to open a brewpub in Spokane when his wife, Kara, asked, "Well, if you're going to do that for somebody else, why not just do it for yourself?"

Ambrosia Bistro opened in 2005 and quickly became more of a fine dining restaurant than Scott and Kara Cook had originally intended. Over the past 15 years, it's been featured in Wine Spectator three times and has won many local culinary accolades, such as the Epicurean Delight First Course award.

"We never set out to be an award-winning restaurant," Scott says. "We're more known for our personalized level of service and as a neighborhood hangout."

Truthfully, Ambrosia can be classified as "polished casual" dining with loyal customers who return not just for the food, but also for the staff. Four front-of-house employees have been with the Cooks since before the doors even opened.

"They were there painting the walls and putting furniture together," Scott recalls.

Ambrosia is also a kitchen away from home. All three of Scott's sons grew up at the restaurant and worked their first jobs there. One of his sons, Tanner, currently helps run the restaurant. Customer loyalty is also a family affair as Ambrosia sees a third generation of diners coming through the door.

"Mom and dad brought the kids," says Scott, "and now the kids are married and they're bringing their children. That's just awesome."

In 2007, the Cooks hired their first executive chef, Jeremiah Timmons.

"If there was a Build-A-Bear for chefs, Jeremiah would have been our Build-A-Bear," says Kara.

Although Timmons has moved on to pursue other culinary endeavors, he and the Cooks established a well-rounded menu that still incorporates not only a variety of cuisines, but also takes common menu staples and elevates them to a more polished level.

For example, Ambrosia's bistro burger ($16) is made with a juicy mix of Wagyu and Angus beef, and one of its toppings is a housemade sweet relish aioli. The sriracha burger ($16) takes this staple to another level with avocado, jalapeños and a creamy sriracha sauce. The curry chicken ($24) isn't just curried chicken. The creamy sauce and fluffy rice are enhanced with apricots, and the whole dish is topped with crunchy cashews. Two pasta dishes — prawns and purses ($27) and the Cajun pasta ($25) — offer drastically different flavors drawn from cuisines around the U.S. Black truffle essence enhances the porcini stuffed pasta purses, and a New Orleans mix of proteins gets a fiery kick from Cajun spices.

One of the appetizers from Timmons' 2007 menu became an Ambrosia staple and has since remained one of its most popular dishes.

"It's so unusual," says Scott. "People can't really find anything like it at any other restaurant in town."

Timmons' sister-in-law and her husband, who is of Indian heritage, were dancers at the Royal Winnipeg Ballet in Manitoba, Canada. During a visit to their home, Timmons enjoyed true Canadian poutine at a local restaurant, as well as authentic Indian dishes cooked by his brother-in-law. Experiencing these foods side-by-side, the chef was inspired to combine the concept of poutine with the intense flavors of Indian cuisine, thus creating Ambrosia's exclusive sweet potato fries ($9).

Ambrosia's menu is modest with its titles. Sweet potato fries is a common dish on many restaurant menus, but further inspection reveals Timmons' unique reworking of what seems simple to start, with a decadently creamy garam masala sauce, goat cheese and scallion. The stack of perfectly crisp, bright orange fries is both sweet and savory.

Sweet potatoes were domesticated in South America around 5,000 years ago, and a recipe for fries made with these tubers was first published in the early 1930s by the famous agricultural researcher and innovator George Washington Carver. He couldn't have known how popular they would become in the early 21st century.

Ambrosia's sauce uses a specific blend of Indian garam masala spices that has remained mostly unchanged since the dish was first introduced.

"One of the biggest focuses at our restaurant is consistency," says Scott. "The food needs to stay the same in style and quality, but that's a little tougher to do today."

Recently, the consistency of this dish was challenged when the restaurant had difficulty sourcing its spice blend due to COVID-19 supply chain issues. They switched briefly to another brand, but the results were noticeably different.

So, the Cooks spent time tracking down another supplier of the dish's original garam masala, and the sauce is once again impeccable. The spice blend imparts a level of flavor without heat that invokes both the comfortable and the exotic in each bite. Traditional Indian garam masala blends include fennel, bay leaves, black and white peppercorn, cloves, cumin, coriander, red chili powder, nutmeg, and cardamom.

The fresh and tangy, soft goat cheese cuts through the rich sauce, making what could be a heavy dish effortless to enjoy with every forkful. Paired with the expertly knifed scallion, the cheese perfectly completes this scrumptious dish.

Whether you're an Ambrosia regular or heading there for the first time, this delectable and interesting twist on poutine is a must-have as an appetizer, a main dish or alongside a succulent burger. Share with family or savor each bite solo while sipping a glass of award-winning wine on their newly renovated dining patio. ♦