WSU Athletics photo
Twin sisters from New Zealand put the Pac-12 on notice last year. And they're back.

There are expectations on the Palouse this time around.

A year ago, the Washington State Cougars were in familiar territory. They were picked to finish dead last, landing 12th in the Pac-12 preseason poll. For a program that hadn't managed a top-half finish in their league since the mid-1980s, it shouldn't have been much of a surprise.

The real surprise was what came next. When it was all said and done, the Cougars sat in sixth place — a top-half finish — and earned an at-large berth to the NCAA Tournament for the first time since 1991.

Now, entering this season, the Cougars are expected to do that again. They've been picked to finish sixth — a top-half finish — in this year's preseason poll.

"I'm the last coach that's going to sit up here and say we're built perfect and we're ready," head coach Kamie Ethridge said at Pac-12 media day last month. "Every single day I walk out into the gym and just hope we can keep finding ways to get better in the gym and compete."

Improvement is key for the Cougars to live up to expectations. The Pac-12 is no cakewalk. Quite the opposite. It's home to the reigning national champions, Stanford, and the team the Cardinal beat to earn that title, Arizona. Fully half of the league's teams made the NCAA Tournament last season.

"The expectation is bigger and better, and we're not afraid of that. We're in the best league in the country. No one is getting worse," Ethridge says. "The expectation was great, and we got on a great run last year. It's exciting to be here now. You know, the target will be on our back a little bit." 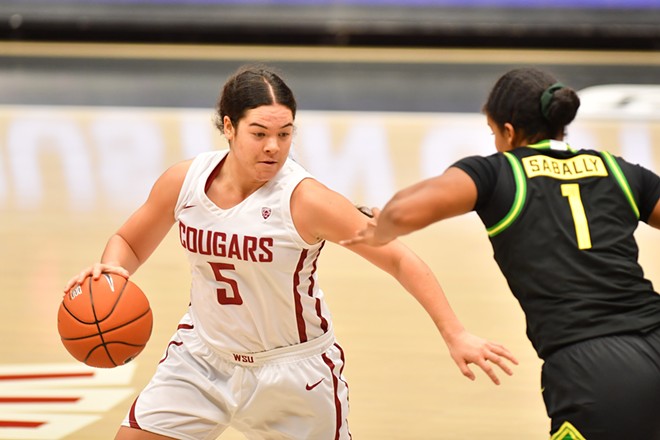 Last year's team exceeded expectations thanks in large part to the emergence of a dynamic duo of players, one a freshman and the other a senior, but both in their first year playing with the program. Sisters Krystal and Charlisse Leger-Walker took the college basketball world by storm. Krystal, the senior, was the team's starting point guard and led the conference in assists with 109. Her 9.8 points per game were second on the team only to her younger sister, Charlisse, who averaged 18.8 points per game. The younger Leger-Walker was named Pac-12 Freshman of the Year and earned honorable mention All-America honors from the United States Basketball Writers Association. Entering this season, ESPN ranked her as the 17th best player in college basketball.

It was expected that Charlisse would be back for her sophomore season. Her elder sister, though, had a decision to make. Already a fifth-year senior, Krystal was given the chance at a sixth season when the NCAA announced all student-athletes would gain one extra year of eligibility due to the pandemic.

"She milked it," Ethridge says of Krystal's decision with a laugh. "They torture the coach, they toy with me, both of them. They're just like that. That's why I love it when I can just run them. I still have a little power at times."

Ultimately, Krystal decided to come back for that last run.

"It was kind of always a no-brainer, playing basketball alongside some of my best friends, in the best conference in America. It's some of the best women's basketball you're going to get anywhere," Krystal Leger-Walker says. "After seeing the runs we made and some of the games we won, there's no way I didn't want to be a part of that again."

With their backcourt dynamos both back, the Cougars' foundation is strong, and they have the supporting cast to build an even stronger team. Eight of the 12 players on the roster are upperclassmen. The lone freshman, Tara Wallack, is the only player who wasn't around for last season's magical run.

Beyond just continuity, though, what might make this year's Cougars better?

"We shot the ball a ton this summer," Ethridge says. "We put them on a mission to be better shooters by the time we start. I think that's going to be key for these players to be more successful, for our post game to be more successful, is that we can stretch the floor a little better than we could last year."

Not only are the expectations high, but so is the standard inside the program. Ethridge says the team wants to compete with everyone in the league, and that there are teams the Cougars haven't defeated yet. That, along with what they experienced last year, is pushing this team.

"The belief is more there than it was this time last year," Krystal says. ♦