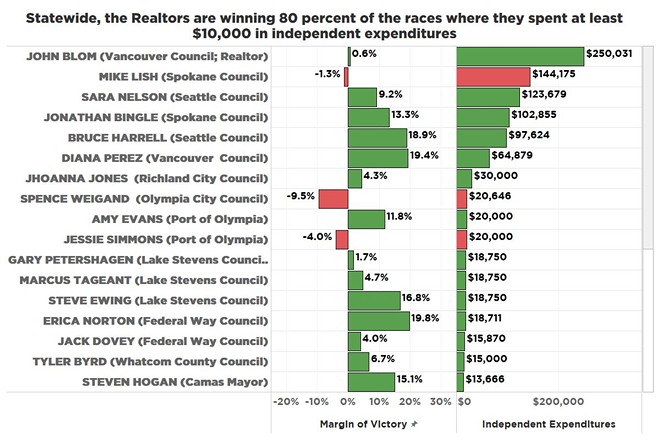 Now that the election totals have come in, was it worth it?

That all depends on your definition. In one sense, the more than $100,000 they spent on Bingle’s race was a smashing success — he won by more than 13 percentage points — while their larger investment of almost $145,000 for Lish came up oh-so-narrowly short. Zack Zappone, a progressive who campaigned with explicitly anti-Realtor messaging after losing out on their endorsement, squeaked by a little more than a percentage point.

“If I were the Realtors I would be embarrassed I spent so much money on Mike Lish,” says Jim Dawson, Eastern Washington director of the progressive activist organization Fuse. “How many times do they need to lose to stop spending so much money?”

In another sense, you could see the money spent on the Bingle race as the real waste — a 13 point victory probably didn’t need that much cash to win — and the razor-thin Lish race was the smart play. If anything, the Realtors could regret not spending more on the Lish race.

Darin Watkins, government affairs director for the Spokane Association of Realtors, notes that they also endorsed incumbent Councilwoman Betsy Wilkerson before the primary. After the primary, however, their opponent was disqualified from the race for not living in the district, rendering it moot.

“I think more importantly, we were able to keep housing front and center as part of the political debate,” Watkins says. “We believe it’s one of the critical issues.”

Statewide, the Realtors were largely successful, handily winning the Seattle mayoral and council races they’d poured money into, and giving their biggest investment — Vancouver City Council candidate John Blom — a half percentage-point lead. Time will tell if that lead holds, however.

2. FUSE got painted as the boogeyman 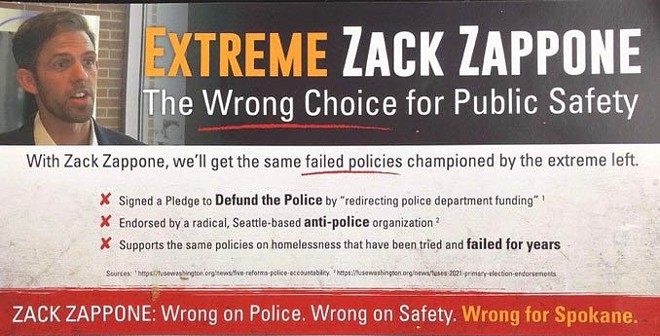 Daniel Walters data visualization
All data is current as of Friday, November 5


Outside of politically connected circles, the progressive group FUSE is not exactly a household name. But multiple mailers and negative ads this year attempted to use the group's endorsement of Zappone and Naghmana Sherazi as a cudgel, referring to FUSE as a "radical, Seattle-based anti-police organization."

In fact, the Fuse pledge never uses the phrase "defund the police," though it does use the phrase "redirect police department funding to community-based alternatives."

While some people on the left argue that is defunding the police, Zappone wasn't one of them.


"It’s ironic that the Sheriff is using us as an extreme group," says Dawson, the group's Eastern Washington director. He notes that the Sheriff and the local chapter of FUSE have previously worked together to support the same goal —  opening a mental health and substance abuse diversion center.


"We’re happy to take the free publicity for our organization," says Dawson.

Despite all these attack ads, and not being an incumbent, Zappone's margin of victory is nearly as close as Karen Stratton's re-election was two years ago. 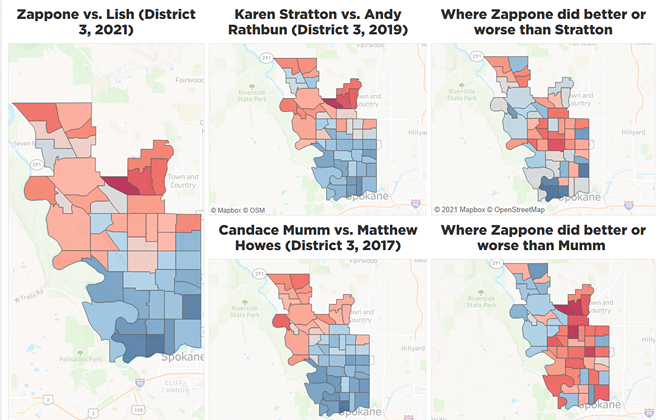 If you want to understand what's unique about a candidate, instead of just a political party, you can't just look at one race. You've got to compare them.

At first glance, Zappone's map looks very similar to the victory maps of Karen Stratton and Candace Mumm. But when you actually compare the margins, you find that, while Zappone held his own in parts of low-income West Central and made significant improvements in the upper income southern Indian trail neighborhood, he struggled in middle-income places like the Garland neighborhood.

There are a lot of possibilities for why — maybe, for example, Zappone did a little better in some of the neighborhoods where he was already on the ballot when he ran for state rep last year.


"He basically campaigned for two years," says Watkins, with the Realtors. "He had great name recognition. Far better than Candace Mumm."

Maybe it was about where Lish had better name recognition, or about where mailers or flyers were targeted. But my favorite theory? It's a high school rivalry thing.

5. The firefighters didn't turn on the firehose of PAC spending

Two years ago, the Spokane firefighters poured $80,000 into the Citizens for Liberty and Labor PAC, part of a massive union effort to counter the Spokane Association of Realtors and stop Nadine Woodward from becoming mayor.

But this time? The firefighters only gave $10,000 to progressive PACs, and their money was ultimately funneled to PACs associated with FUSE.


"Our guys get tired of getting beat up by guys like you," laughs Spokane firefighter Randy Marler, the Chair of the Citizens for Liberty and Labor PAC. He takes the helm of the Spokane Local 29 firefighter's union next week.

Indeed, the firefighter union's political efforts have been heavily criticized in the past. Four years ago, a fire union-backed PAC was behind a nasty smear of conservative candidate Matthew Howes. They were also fined in both 2015 and 2017 for not properly reporting their campaign spending.

But Marler says it's also a matter of having other things to focus on this time.


"The focus of the firefighter union was a lot on the vaccine mandate and all that," Marler says. "There was a lot more going on."

"I hate that it is part of our politics," he says. "But as we’ve seen with the Realtors, if we’re not engaged at all then they get to completely steal the narrative and buy elections."


Then again, Zappone seemed to have held his own against intense spending without needing much help.

"It was experimental and interesting to see what does happen if we step back a little bit," Marler says. "If we can spend less and keep the message all positive, then that works." 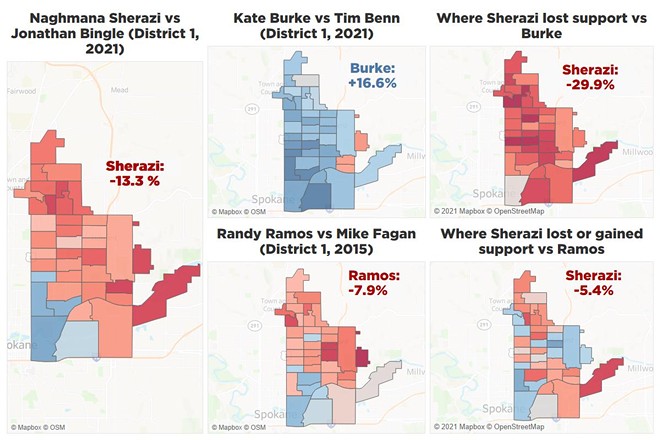 After getting shut out by two conservatives in a seven-candidate scrum in 2019's primary, Sherazi squeaked by the primary with only four votes this year over her left-leaning competitor.

Drill down to the numbers, however, and it looks like the story is mostly about turnout.


Turnout is always a challenge in this district. After the primary, Sherazi told the Inlander in October, she learned about "folks that had taken my yard sign and had my yard sign set up in their yards" but hadn't actually voted in the primary election.

But while turnout was low in District 1 again this year, the raw number of votes four years ago was far lower.

Burke only got about 500 or so more raw votes in 2017 than Sherazi got this year — and Sherazi's votes are still being counted. In fact, if Bingle only got as many votes Benn did against Burke, and Sherazi didn't get a single additional vote, she would have won by 11 percent.

So the question is less about why Burke did better than Sherazi, and more about why Jonathan Bingle did much, much better than Benn.

The conservative turnout could have been a reaction to Burke's tenure. Burke had run a comparatively moderate campaign. But for much of her tenure on council, she did things that drove conservatives crazy, like chaining herself with other protesters of Spokane's homeless policy after police announced plans to clean up the homeless encampment outside City Hall.

While Sherazi brought a nuanced approach to many issues during the campaign, she actually had explicitly said on the record last year that she supported defunding the policing. (By that, she stressed in her post at the time, she only meant spending less funding on police militarization and more toward social services.)

Like Zappone, Sherazi was targeted with negative advertisements referring to her as "Radical Naghmana Sherazi." But Dawson, of FUSE, speculates that those ads hurt Sherazi a lot more.

"With the amount of money spent, being a woman of color and being an immigrant is a tough row to hoe," Dawson says. "Attacks about being radical — it’s a woman of color who is a Muslim...  It sticks more to people of color."


Sherazi argued that her identity as a Pakistani immigrant, as well as the only renter on the council, would add important diversity to the council. She had been a regular contributor to SpokaneFAVS Ask a Muslim column and, during her interview with the Inlander, she brought up both her leadership of her Muslims for Community Action and Support and questioned how Bingle could reconcile his Christian faith and his approach toward homelessness.

But Dawson stresses that "Islamophobia is real... playing up that difference is going to hurt."


Meanwhile, negative mailers against Jonathan Bingle from a progressive PAC, 509 Forward, seemed particularly inert. The mailer quotes Bingle saying that government is "horribly inefficient," that he has "invested so much in prayer," and that he would "love to represent the area in the state legislature." It also includes a picture of Bingle at the Church At Planned Parenthood, a far-right anti-abortion protest with former City Councilman Mike Fagan.

But the mailer doesn't provide any context for the event, so voters who received the mailer just saw the candidate standing beside the former councilman their district had already elected twice.