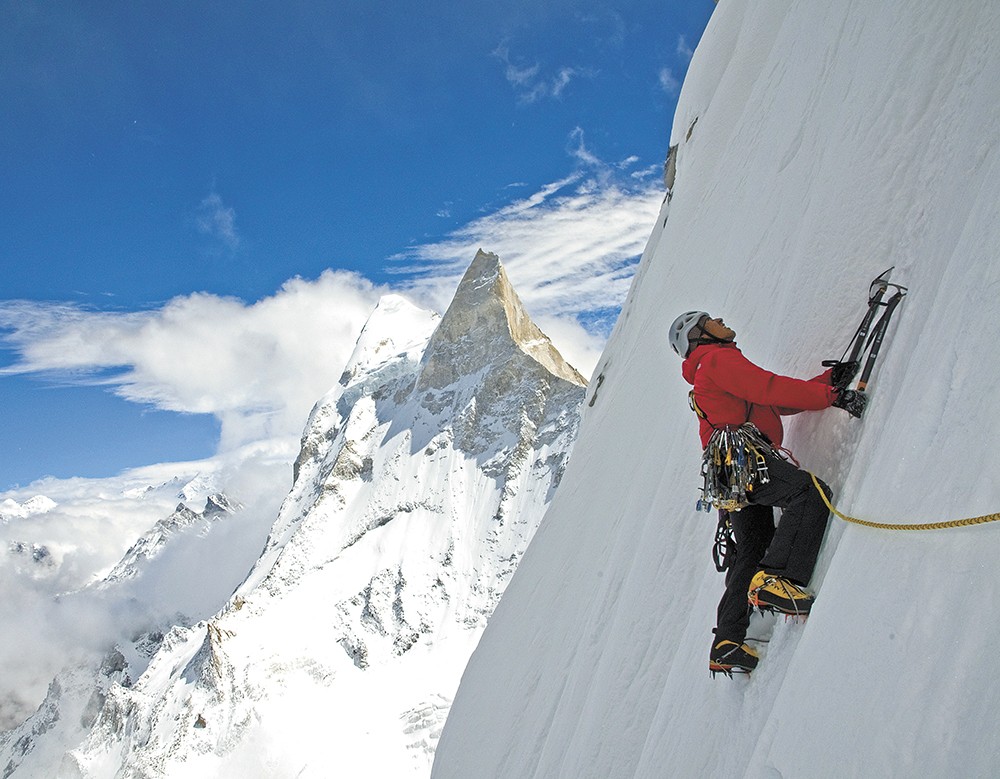 In the documentary Meru, climbers attempt to ascend one of the toughest peaks in the world.

Plenty of outdoor-adventure documentaries get by on stunning photography

and flashy stunts that might be thrilling for backcountry skiers or weekend kayakers, but for many of us they come off as little more than 90-minute North Face ads.

Meru, though, is one outdoorsy doc that knows how to get its audience emotionally invested in what's happening on screen, in this case the efforts of three mountain climbers to scale a 21,000-foot peak known as the Shark's Fin on India's Mount Meru. And it does it by some simple additions to the tried-and-true tropes of lesser films in the genre; namely, by giving viewers each of the climbers' personal backstories, exploring their respective motivations for such a death-defying lifestyle, and illustrating the importance of the team's interpersonal relationships in pursuit of a seemingly impossible goal.

Telling you that climbers Conrad Anker, Jimmy Chin and Renan Ozturk ultimately reach the peak of the Shark's Fin is no spoiler, because if the audience has learned anything in the 90 minutes of Meru before their celebration on the summit, it's that this trio would probably be making another effort to scale the insanely technical mountain — and filming it — right now if they hadn't.

The climbing scenes are certainly thrilling, but let's face it, if you drop anyone with an HD camera atop a 20,000-foot peak amid the Himalayan mountains, they're going to get some stunning footage. Watching the trio ice-pick their way upward or pull themselves along ropes on a mountain are actually some of the least-interesting aspects of Meru.

Far more captivating are the film's sections about Anker's mentor, Mugs Stump, who was never able to tackle the Shark's Fin before dying, giving Anker an incredible drive to succeed where his hero had failed. While Chin and Ozturk are considerably younger than Anker, they both have to overcome near-death experiences that occur in between the team's two runs up the Shark's Fin recounted in Meru — one a failure after nearly three weeks on the mountain and ending less than 100 meters from the top, the other the ultimate, joyous success at film's end.

Chin, who co-directed with Elizabeth Chai Vasarhelyi, also takes the time to talk to the climbers' family members, learning of the stresses they feel while their husbands and brothers are risking life and limb. It's those little additions to the tired outdoor-doc machinations that makes Meru well worth a look, even if you've never climbed anything taller than a set of stairs. ♦

Meru is not showing in any theaters in the area.