Your guide to the most anticipated music reunion of the year 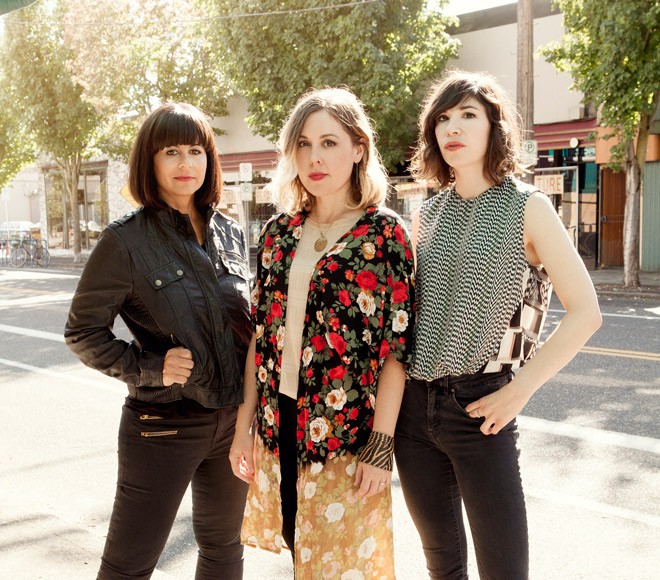 Sleater-Kinney plays their first show in nearly 10 years at the Knitting Factory Sunday. The show sold out in minutes, making it one of fastest-selling events ever for the venue.

as we go through the syllabus for our crash course in Sleater-Kinney. Headphones are acceptable as you read.

The Portland-by-way-of-Olympia punk trio of Corin Tucker, Carrie Brownstein and Janet Weiss is undergoing a much-hyped return after a nine-year hiatus. They released an incendiary new album, No Cities to Love, in January. And on Sunday, they'll play their first full concert since 2006, right here in Spokane.

The purpose of this course is to introduce the unfamiliar, and remind older fans, of the powerful work of Sleater-Kinney — hailed by legendary rock scribe Greil Marcus as "America's best rock band" before their break. Their return this year has been met with massive media adulation, including NPR and the New York Times profiles, rave reviews for No Cities to Love, performances on David Letterman and Conan O'Brien's late-night shows and an excellent 90-minute interview with Broad City's Abbi Jacobson and Ilana Glazer.

We'll explore how a band born of the riot-grrrl movement, when Tucker and Brownstein were Evergreen State College students, evolved into an elite rock machine capable of mesmerizing critics and fans alike, despite and/or because of politically charged lyrics and being an all-female band in an utterly sexist field like rock 'n' roll.

A passing familiarity with punk and indie rock will help immensely for newcomers to Sleater-Kinney's sound. While the interwoven guitars and vocals of Tucker and Brownstein, combined with Weiss' powerful percussion (and lack of any bass guitar), make for an utterly different sound among modern rock bands, in their music you can hear the influence of bands like British art-rockers Wire, fellow Northwest lady punks Bikini Kill and Bratmobile, and musicians who love blending noisy instrumentation with pop hooks, a'la Sonic Youth.

Students might also want to look into the individual members' pre-Sleater-Kinney bands — Tucker's Heavens to Betsy, Brownstein's Excuse 17 and Weiss' Quasi — for some understanding of how individual members inform the band's sound.

Three of the band's eight albums stand out as necessary listens, and they are your homework:

Dig Me Out (1997) is the band's third release and first with Weiss on board. Her arrival marked the rise of Sleater-Kinney as a band that needed to be heard. It is the springboard for all that follow. Best songs: "One More Hour," "Turn It On," "Little Babies."

One Beat (2002) captures a band whose members are maturing personally just as the country comes to grips with 9/11. A prime example is "Far Away," as Tucker reflects on watching the towers fall on TV as her newborn baby sleeps nearby. Best songs: "Oh!," "Step Aside," "Combat Rock."

No Cities to Love (2015) is not just a new set of songs thrown out to the world so Sleater-Kinney can hit the road and play the old "hits." The 10 songs blaze by in just more than a half-hour, and are as urgent and moving as anything the trio released before the hiatus. Best songs: "Price Tag," "Surface Envy," "Bury Our Friends."

Each member released music during the band's break, working with other musicians. The Corin Tucker Band's Kill My Blues album, released in 2012, is excellent. Brownstein and Weiss also teamed up in a supergroup of sorts, Wild Flag, along with Ex Hex's Mary Timony and the Minders' Rebecca Cole; the band's self-titled album was one of the best of 2011.

Intimate knowledge of Sleater-Kinney is best gleaned by seeing the band live. On stage is where they truly shine. Tucker's vocal power is stunning, and Brownstein's pliable voice (complete with faux-British accent!) is a perfect counterpoint as she harmonizes or trades lines with her fellow frontwoman. Brownstein also is a joyful presence, full of Townshend-style windmills and excited jumps as she plays. Likewise, Weiss' intricate playing on the drums and skill as a third vocalist truly shine in concert. Consider a Sleater-Kinney show a must-see to successfully navigate this course.

In the spirit of the freewheeling school where Sleater-Kinney got started, no final grades will be issued. The only "test" is attendance at one of the band's shows (that is, if you can find tickets).

Anyone who yells "Put a bird on it!" at a gig because they love Brownstein on Portlandia will be subjected to exaggerated eye rolls from nearby crowd members.

I don't have a Ph.D. in Sleater-Kinney, but I'm a longtime student in the field. I've driven 6,146 miles to see five Sleater-Kinney shows, including the last before their hiatus on Aug. 12, 2006 in Portland.♦