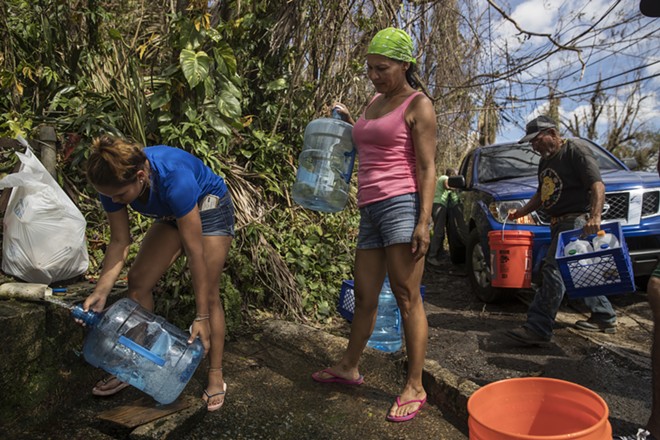 
SAN JUAN, Puerto Rico — In the storm-battered neighborhood of Barriada Figueroa on Friday, neighbors greeted visitors with a now-familiar question, one that was inevitably followed by a disappointing answer: “Are you FEMA?”


Hurricane Maria had ripped walls and metal roofs from homes in this working-class neighborhood in central San Juan. Nine days after the storm hit, putrid water still lay stagnant in the streets.

Aida Perez, 73, gave a tour of her house, pointing to the holes in her roof and ceiling. She said she could use a tarp. And food. And money. But no federal officials had been spotted yet.

“After Georges, FEMA came, the Red Cross came, and they came rapidly,” she said, referring to Hurricane Georges, the 1998 storm that caused extreme damage here, and the Federal Emergency Management Agency.

The slow pace of the federal response to Hurricane Maria — and the upbeat portrayal of the response by federal officials, including President Donald Trump — threatened this week to become an embarrassment and political liability for the administration as it scrambled to confront a natural disaster that has overwhelmed this island, and presented breathtaking logistical challenges.

On Friday evening, Trump again repeatedly praised his government’s response to the Puerto Rico hurricane during remarks to reporters before leaving for his New Jersey club for the weekend.

But the disconnect between what officials in Washington were saying and the situation on the ground in Puerto Rico was captured on live television by the response of the mayor of San Juan when she was played a clip of Homeland Security Secretary Elaine Duke saying that she was “very satisfied” with the government’s response. Duke called it “a good news story in terms of our ability to reach people and the limited number of deaths that have taken place.”

Trump’s political adversaries quickly pounced on what they said was evidence of a lack of interest or urgency on the part of the president. And some saw an echo of the comments made in 2005 by former President George W. Bush, when he praised then-FEMA head Michael Brown for doing “a heck of a job” in the midst of what was widely seen as a slow and botched recovery effort in New Orleans after Hurricane Katrina.

Victor J. Blue/The New York Times
Refrigerated containers sit at the port in San Juan, Puerto Rico, Sept. 28, 2017. The Trump administration, which has insisted that its efforts in Puerto Rico have been adequate, faced increasing pressure on Thursday to mount a more aggressive response to Hurricane Maria’s devastating lashing of the island.