Spokane has a professional basketball team? Sort of. It kind of depends how you define "basketball." 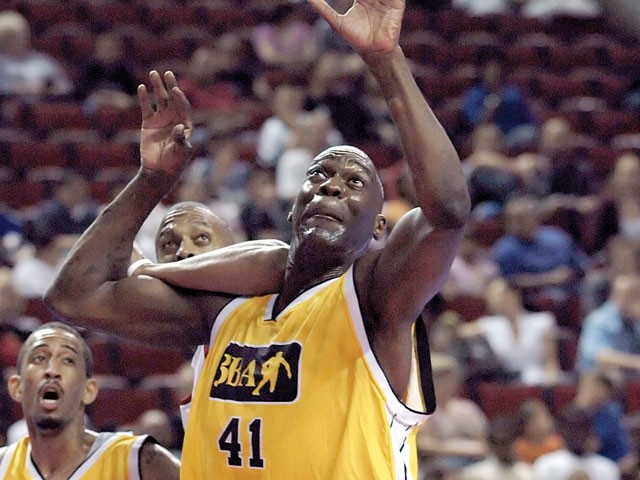 3BA
Shawn Kemp suited up for a 3BA exhibition game in Seattle.

A game is nothing without rules. That may sound contradictory, at first. (Games are about play and fun, not bureaucracy.) But the game of tag, without the requirement that players touch each other, would just be a lot of pointless running around. And without a play clock, football would be merely an endless war of attrition.

But rules needn’t be rigid or overly codified, either. Just because the NBA fields teams of five guys on 94-foot hardwood courts with 24-second shot clocks doesn’t mean that’s how basketball has to be played everywhere.

Hoopfest is, of course, a great example. This weekend, almost 7,000 teams will take to the streets to play a game that disregards many of the NBA’s rules and conventions (its scoring, perimeter, timing, etc.) yet remains every bit as much “basketball” as the game played by the pros.

Garry Merritt thinks he understands this, too.

Merritt, a Houston-based attorney, is the commissioner for the 3BA, a nascent basketball league that has two teams so far (in Spokane and Las Vegas) and will be getting the word out at Hoopfest this year.

The idea for the league spawned over a decade ago but is just now coming to fruition. It’s simple: You amp up the exciting parts of pro basketball and cut out the boring stuff. That means shrinking the full court to 72 feet long, shortening the shot clock to 18 seconds and pitting only three players against each other, rather than the traditional five.

The result is less strategic, less contemplative, and more focused on getting the ball to the hoop. That means more shooting, more handles, a higher tempo and sometimes meteorically high scores.

In 2008, the league took its show on the road, playing five exhibition games in arenas from Memphis to Chicago to Seattle. At Key Arena, former Sonics great Shawn Kemp donned the yellow jersey of the home team and helped beat the Portland exhibition team, 142-141.

Kemp — who is rumored to possibly appear and sign autographs at Pre Funk Friday, a Hoopfest kickoff party being held at the Lincoln Center on Friday night — has been heavily involved in the development of the league. Former stars such as Lakers legend A.C. Green, who promoted the league with Kareem Abdul-Jabbar at Hoopfest last year, are also interested.

Both Kemp and Green flew to China last year to spread the word about the 3BA.

At this year’s Hoopfest, the league will sponsor nine elite-division courts on Spokane Falls Boulevard. They’ll also have a booth nearby, where you can expect to learn more about the league in general and the Spokane Slam team, specifically.

“Spokane is the perfect market for us,” says Merritt. “I’m so excited about it.”

He expects that the Slam will be one of eight to 10 teams (mostly in the West) that are scheduled to begin the first official season of 3BA play in June 2011. The summer start is opposite of the schedules for other basketball leagues, like those in Europe, to encourage those players to join in. “[But we also] want to find regional stars, who played college ball in a certain area, and they’ll play in our league in the summer,” Merritt says, adding that Spokane has no shortage of such prospects.

He’s banking, too, on Spokane developing a thirst for the game. He may not be disappointed. Arena football is an odd mutation of professional football that has been wildly embraced by Spokane Shock fans. The city also cheers road running, minorleague baseball and is fanatical about college hoops.

“We wanted to make sure we’re in good markets that like minor-league sports and are committed,” says Merritt, adding that he hopes the teams will be “run by local people who are passionate about their communities.”

Taking It to the Streets

By Daniel Walters and Chelsea Yanuaria