Joel Salatin arrives in Spokane with a plan for sustainable food

Rachel Salatin
Joel Salatin is a both a sustainable farmer and an opponent of industrial farming.

Dwarfed by mega-corporations and underappreciated by federal regulatory agencies, being a farmer on a small plot of land can be a thankless job. Joel Salatin believes that having the deck stacked against them prevents many small farm owners from seeing the possibilities.

"Farmers feel like we're victims because nobody loves us," he says with a laugh. "We little farmers get this inferiority complex."

He says "we," but it's hard to believe he wrestles with self-doubt. Salatin, called the most famous farmer in the world, has become known as not only a small-scale farming guide, but also a brazen opponent of industrial food production. He's a self-proclaimed "lunatic farmer" whose job, second to farming, seems to be ruffling feathers. He's convinced that small farms play a critical role in feeding the world, despite a lack of recognition.

Salatin will visit Spokane on Saturday as the keynote speaker at the Spokane Conservation District's Food & Farm Expo. Part how-to, part pep rally, he'll spend the day teaching farmers how they can turn their passion into a living.

"The main idea here is to empower folks to do more," Salatin says.

The all-day conference at Spokane Community College features courses on everything from choosing animal breeds to brewing and distilling local grains. A special track taught by Salatin is full, but tickets are still available to hear his keynote lecture that evening at Gonzaga University.

In the 10 books he's written since 1995, Salatin indicts Americans' fast-food culture and explains his life and farming philosophies. His family bought a tired piece of land in Virginia's Shenandoah Valley in 1961 and turned it into a food-producing ecosystem that now includes beef, pork, poultry and forestry products. Without using chemicals, his Polyface Farm feeds more than 6,000 families and supplies restaurants, retail outlets and a farmers market.

He became the poster boy for non-industrial farming a decade ago when Michael Pollan, a national food writer, included Salatin's farm in his book The Omnivore's Dilemma, which traces the origin of the American diet to Midwestern corn fields. He was later included in Food, Inc., a documentary that examines industrial farming's hold on the national food system.

Through speaking tours and on his own farm, Salatin makes it a point to train other farmers. In Spokane, he'll bring practical tips, including how to use natural resources to their full potential and how to get your spouse on the same page. 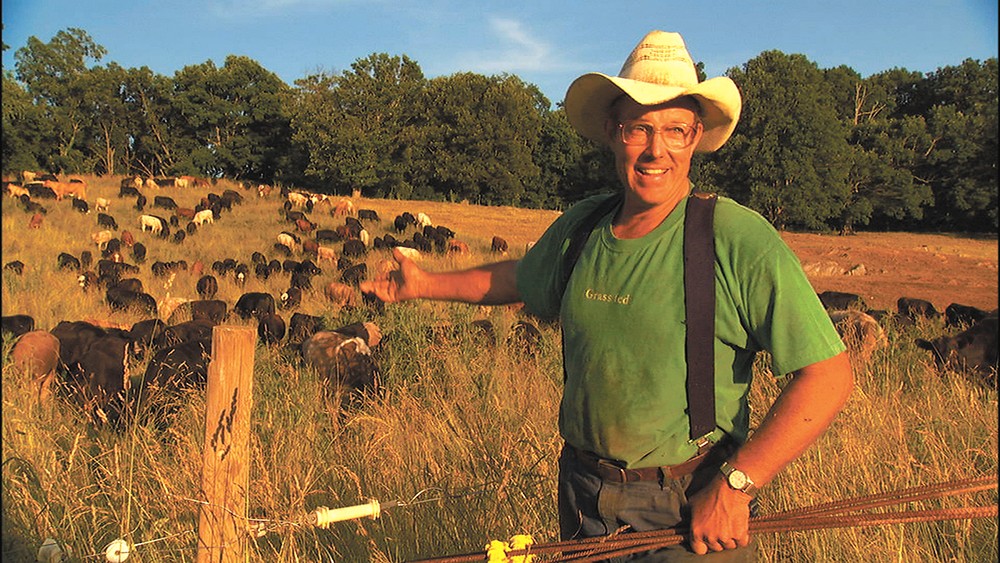 Joel Salatin has been called the world's most famous farmer.

He encourages farmers to find creative ways to overcome a marketplace that's fitted to larger operations. Collaborating with other farmers, working with customers and taking advantage of technology that has reimagined farm infrastructure are just a few ways of capitalizing on efficiency without sacrificing sustainability.

After a long career on the public stage, he still sees "the big guys" getting bigger. But he also sees the little guy pushing back.

"For every Walmart that opens up, there's two more farmers markets," he says. "Culture tends to balance out itself." ♦

With a big name like Joel Salatin headlining this year's Food & Farm Expo, organizers knew they'd get people through the door. The next question became what to do with a larger audience.

"This is our most audacious seminar that we've done," says Heron Pond Farms owner Shannon Meagher, who helped plan the Expo.

Beginning at 9 am at Spokane Community College, participants have more than 90 classes to choose from. Overall, organizers aimed for a day that would appeal to just about anybody, with an underlying goal to talk about what works in this region. In a couple of ways, they're trying to grow support around new ideas:

• Pat Munts, small acreage and small farms coordinator at the Spokane Conservation District, will introduce urban farming as a way to combat food insecurity and improve the quality of life in Spokane County. The urban farming ordinance is just a couple of years old, and people are taking advantage in different ways. Munts wants to see the region tap into urban agriculture's full potential. "It's ignored — it is scattered, it is small scale," she says. "In the long run, I think it is an economic driver for the community."

• Grains are prolific in the region, but the idea of using them in craft brewing and distilling is still very new, says Joel Williamson of LINC Foods. He helped organize a set of courses geared toward building the local "grainshed." With the help of local brewers, including Cameron Johnson of Young Buck Brewing in Spokane, Williamson hopes to build momentum around small-scale grain farming that could bring local beer and spirits to a new level. "The market has dictated to farmers what we want them to grow," he says. "Breaking away from that is risky. You're trying to make a new market."