When the person who grows, picks and packs your food

is the smiling farmer on the other end of a handshake at the weekly market, it's easy to feel sheltered from food recalls and nationwide outbreaks of listeria or salmonella. After all, that's what so many people love about small farms and local food: It's personal, with a side order of trustworthiness.

"People trust our food a bit more because they're more connected to our food than they are if they buy a cantaloupe from Safeway," says Gabriela Amador of Cloudview Ecofarms in Royal City. "We have a different relationship with our customers."

People promote buying locally grown food for a lot of reasons, and whether it's based on philosophy, proximity or economics, the appeal is expanding beyond the weekly market. Farm-to-wherever isn't a new concept, but it's quickly becoming a more significant one for many farmers, giving the likes of Cloudview more options for the thousands of pounds of carrots harvested in early September.

But as farmers move into markets dominated by food grown and shipped all over the world, they must grapple with consumer demands for more information, including creeping concerns about food safety. Expanding the reach of local food has brought new questions: Is this going to be safe? How will I know?

Answering these questions becomes more difficult for farmers accustomed to face time with the people who eat the food they grow. Schools, especially, have set a gatekeeper — an annual audit through a voluntary U.S. Department of Agriculture program to certify that a farm uses safe practices, from planting to harvesting and storing.

Good Agricultural Practices, or GAP, is similar to organic certification or other labels that give a school or grocery shoppers an idea of how the food was produced, says Joel Williamson of LINC Foods, a Spokane cooperative that sells locally grown food to schools, restaurants and grocery stores.

"Once you get beyond an arm's reach, organic certification becomes important. All our farmers are doing those things, but they're not certified because their customers are a handshake away," Williamson says. "GAP certification is the same. No farmer wants to hurt anyone — they don't want to do unsafe things. GAP is a way to communicate clearly that they're doing these things, and they're being audited."

Similar to those other programs, the cost of meeting the standards can disqualify a lot of small farms. Seeing GAP's rising importance, the Washington State Department of Agriculture and LINC Foods have been working with farmers to adapt food safety protocols to a small operation.

"The reason they're doing what they do is they want to grow wonderful food to feed people in their communities," says Laura Raymond, who works with small farms and the farm-to-school program at the WSDA. "That's why they're farming the way they're farming. They're running a farm business, but there's a real personal motivation behind that of wanting to contribute to their communities. From that perspective, farms are always interested in learning ways they can do that better."

How we got here

When it comes to food safety in the U.S., we owe a lot to a novel. The Jungle, written by Upton Sinclair in 1906, revealed some of the horrors of the meat-packing industry and inspired President Theodore Roosevelt to push for the first federal laws to scrutinize ingredients and regulate the food industry.

Eventually, those laws gave us the U.S. Food and Drug Administration and the Food Safety and Inspection Service — two agencies that greenlight the food we buy.

Despite oversight, food-related illness outbreaks are a fixture on the news. Right now, the FDA and Centers for Disease Control are investigating outbreaks linked to frozen strawberries, raw scallops, flour, alfalfa sprouts and frozen vegetables. Many recalls of vegetables are traced back to crops grown in other countries, like Mexico, but in 2006, California-grown baby spinach contaminated with E. coli killed five people and sickened 205 others.

In 2009, in one of the biggest food recalls in U.S. history, nine people died and hundreds were sickened in nearly every state because of a salmonella outbreak. The recall included 2,100 products from more than 200 companies, all of which came from a contaminated Peanut Corporation of America plant in Georgia. The company's owner was sentenced to 28 years in prison after a jury convicted him of 71 criminal counts, including conspiracy, obstruction of justice and introduction of adulterated food.

The case served as the impetus for sweeping food safety legislation known as the Food Safety Modernization Act, which passed in 2011. FSMA shifts the FDA's attention from reacting to food-related illness outbreaks to preventing them. The FDA has been writing and working to implement rules for the past five years, which includes regulations for fruit and vegetable growers on small farms.

FSMA is the first federal law to apply to a produce farm, Raymond says. The rules are complex and offer some exemptions to different farms, but it demonstrates that attention to food safety isn't a passing fad.

"It is going to be a learning process. ... We're helping everyone understand there's going to be a new normal for what farms are expected to respond to. You may start to get questions about food safety you want to be able to answer," she says. "There is a changing landscape around food safety right now, and we want to make sure farms are prepared, so they can continue to sell to the markets they want to sell to." 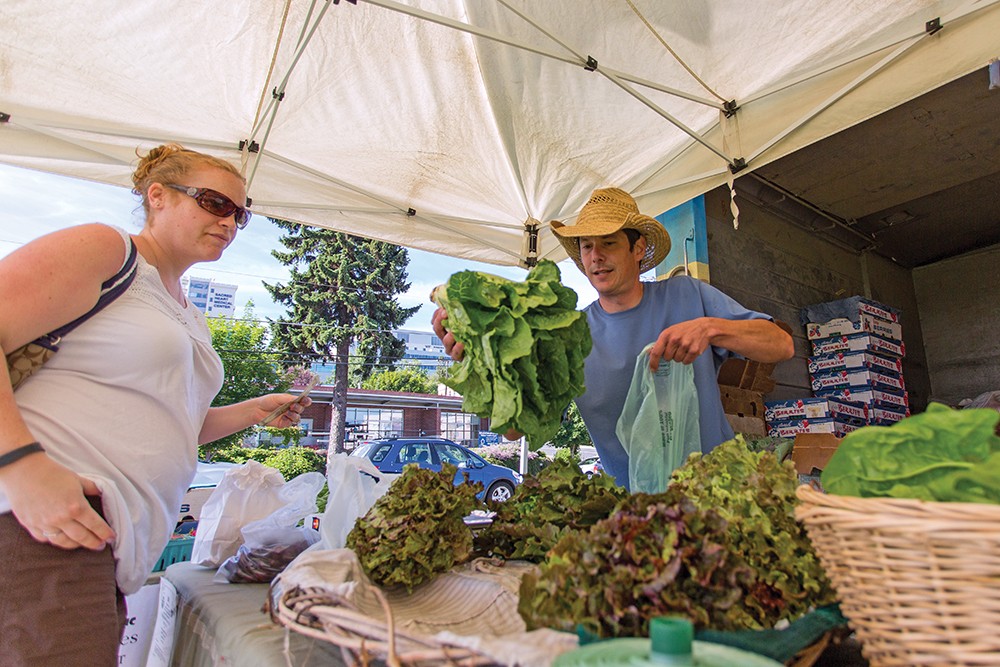 Though GAP is a voluntary, industry-driven program separate from FSMA, it has a similar aim: Prevention. And that makes sense to farmers at Cloudview, who primarily pursued GAP certification to qualify for a USDA program that lets Washington schools spend more federal dollars on local produce, as long as they buy from farms that have been audited.

"Schools want a little more in terms of food safety," Amador says. "You're feeding children — you want to make sure your farmer is doing whatever they can to make sure the food is safe."

Even with the prospect of more business, the task of preparing for the audit looked daunting, she says. She started by implementing a handwashing station and establishing protocols for sanitizing the bins they use to harvest crops.

Raymond says farmers already manage all kinds of risk on their farms all the time, but GAP offers a particular lens to look through, focusing on reducing contamination from water, animal and human sources.

"A lot of it is really common sense, but it's sometimes common sense that you may not be as focused or thoughtful about unless you're preparing for an audit," she says.

Those who work with farmers interested in GAP say they often already have the right protocols in place, but don't document it, which is a key step in passing the audit. Through a series of farm visits and workshops, LINC has helped farmers become more acquainted with the process and helped them prepare for an audit if it makes sense for their business.

"If you haven't had to do these things before, it's definitely a new set of things that you need to add to your operation," Williamson says. But "it can become a habit. It can become easy."

The cost remains a barrier. Farmers have to pay for an auditor to travel from their office to the farm, conduct the audit, and drive home. But without any auditors on this side of the state, the farmer is stuck paying for the hours-long drive back and forth from Wenatchee. The total cost of the annual bill can eat up an entire marketing budget, Williamson says.

But it opens a door to selling more food, so for some it's worth it, he adds.

Since starting seven years ago, Cloudview relied on selling to individuals at markets or through selling shares in each season's harvest. But that model doesn't fit them as well anymore, Amador says. They're simply located too far from the closest towns to make so many deliveries. Instead, they're turning their focus to schools, stores and restaurants. That made GAP a necessity.

"Hearing about GAP, it seemed like way too much work. It didn't sound attainable for a small farm to be GAP-certified, because we had so many crops to keep track of," Amador says. But she was actually surprised. "It isn't as difficult as it seems, and it opens up a huge market for a farm — even a small farm." ♦

Want a lesson in food safety? Or maybe a crash course on kombucha? The Spokane Conservation District's Farm & Food Expo on Nov. 5 could provide both.

The all-day event at Spokane Community College will feature a master class with Joel Salatin, an author, farmer and teacher who's known for his outspoken opinions on raising animals and crops sustainably. Salatin will address the entire Expo during a keynote lecture in the evening at Gonzaga University.

There's something for everyone at the Expo, says Erica Johnson, the SCD's outreach specialist. The list of more than 90 courses includes business necessities, including an overview of the Food Safety Modernization Act and the U.S. Department of Agriculture's Good Agricultural Practices standards, as well as marketing, agriculture education, and water law. It also includes the likes of cooking methods for meat cuts, how to choose poultry breeds, and beekeeping for foodies, preppers and homesteaders.

"It's a mix of what [farmers] want to take and what they should take," Johnson says.

The SCD works with landowners throughout Spokane County to manage and protect natural resources. Keeping land in production through farming and out of development is part of how they do that.

Tickets for the event are $100. The all-day Salatin track is an additional $75. Just going to hear Salatin speak costs $45. The Expo also has student rates. Registration is available online at sccd.org/departments/small-acreage/farm-food-expo/farm-food-expo-registration.