“Eleemosynary”? It means “being charitable” — and the women in this play could do with more of that. 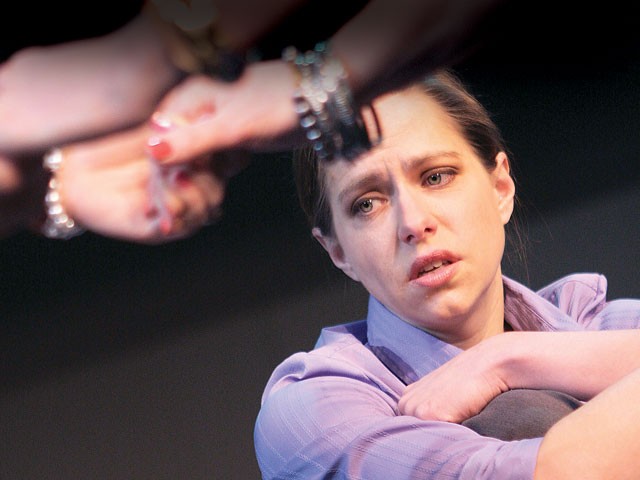 They’ve been successfully turning plays into movies for 80 years (ever since Eugene O’Neill’s Anna Christie, at least); more recently, the game has involved turning movies with name recognition into Broadway musicals (The Lion King and even Shrek, for God’s sake).

But you couldn’t make a movie of Eleemosynary. You couldn’t film this dreamlike story of a grandmother, her daughter and her grandchild (who’s a spelling bee champion, hence the fancy word of the title). For a narrative with lots of chronological leaps that appeal to the audience’s imagination — first she’s alone in a strange apartment, then she’s making a home movie from years ago, now she’s waking up from a coma — you need a theater’s neutral space and close-ups.

Eleemosynary (through May 1) presents a nonlinear, poetic experience that’s filled with insights and characters who, like the rest of us, are a strange assortment of good traits and bad. It’s filled with deaths and resentments and rejections, but also foibles and aspirations and quiet acceptance.

Unfortunately, Interplayers’ production of Lee Blessing’s three-woman drama doesn’t entirely succeed: as the grandmother, Tamara Schupman works too hard at appearing eccentric; Blessing’s script spells out its conclusions too much; the onslaught of crises can seem wearying; and there’s no visual interest at all. Filled with sensitivities and nuances, it presents a mixed mood that can pall when extended for two hours.

But director Maria A. Caprile gets mileage out of simple expedients: three women strolling around a dreamlike space, avoiding eye contact, spewing their resentments, sitting at odd angles, their backs to one another and staying like that.

The costumes and setting are so minimal that they call attention to their own barrenness, so it’s all down to the script and the acting: There’s nothing else here to occupy your attention.

At least Caprile’s direction adds interest in the second act’s spelling bee sequence: a recessed area becomes the stage for big event, with the granddaughter showing off her prowess while a lighting trick denotes her main rival in the spelling bee.

Blessing’s chief insight about this family’s matriarch, Dorothea, is that she self-consciously adopted eccentricity as a way to fend off conventional and patriarchal expectations: If her husband wanted a meek housewife, what he’d get instead was a psychic tuned in to astral projections. Schupman has an inspirational moment when encouraging her girls to fly — face uplifted, arms wide, the enchantress invoking the spirits of possibility — but mostly she overplays the mannerisms. Dorothea’s eccentric displays have become, for her, a habit. Treating them in a more matter-of-fact way would lend them more credibility.

As Dorothea’s daughter and Echo’s mother, Artie — short for Artemis, because Mom expected her daughter to be like a goddess, so no pressure there — Nancy Gasper delivers a sterling performance. Tragic events assault Artie, and Gasper persuasively portrays their effects. Squatting, her face buried in her knees and rocking slowly back and forth, she muffles her voice, then raises her head to reveal glaring, tear-streaked eyes. Artie has run away from her mother, repeatedly, and she’s no good at expressing affection. She doesn’t even know how to touch her child. And yet when Artie curls up, depressed, she whispers that while her daughter only sees poor parenting during the day, “what she doesn’t know is how good I am, at night, as a mom.” In trying to break away from an overbearing mother and draw closer to a daughter whom she doesn’t really know, Gasper will break your heart. Her life, she says, has been “a long apology.”

Rainee Palmer — an EWU student making her Interplayers debut — plays Echo as childlike and headstrong. From the outset, she displays a spelling champion’s delight in words — “clamjamfry,” “bijouterie,” “logodaedaly” — that’s intended to suggest the Wesbrook women’s tendency to show off what they know. Problem is, each of them has an EQ lower than her IQ. They hide what they feel (and most of what they feel is about themselves, anyway).

The qualified achievement of this Interplayers production — particularly in Caprile’s direction and Gasper’s acting — is to show us the value of struggling toward generosity. In the end, Echo, Artie and Dorothea don’t want to be brainiacs anymore; they’re just trying to become charitable human beings.