Kids and their phones can seem inseparable; what's a parent to do? 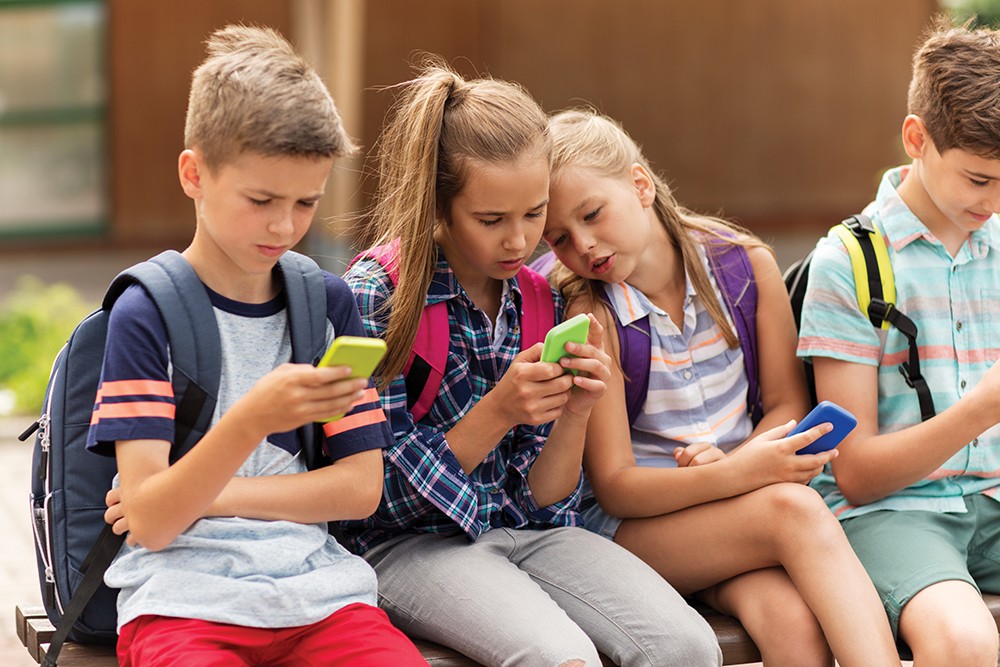 How much phone use is okay for our kids?

From virtual friendships to poor sleep habits and depression,

pediatricians and mental health experts can see that using smartphones and other media devices takes a toll on kids' social, emotional, and mental well-being. They're concerned. And they think parents should be, too.

"I have met teens who have never actually met their 'friends,' but only have online friends," says Jessica Crockett, a marriage and family therapist with Northwest Christian Counseling Associates in Spokane who works primarily with kids and teenagers. "Some struggle with talking to another human in person or making eye contact.

"I also see a connection between those who spend a lot of time on their phones and depressive or anxious symptoms," Crockett adds. "I would not say that the phone usage causes depression or anxiety, as I have also met many teens who use phones and are not depressed or anxious, and there are so many other factors that could be contributing to anxiety and depression. But there does seem to be a correlation, especially when phone usage takes up a majority of the child or teenager's free time."

Whether because they haven't thought enough about their own dependence on media and gadgets, or because they're unaware of just how connected their kids are, parents seem to struggle to set boundaries for their families. To help, the American Academy of Pediatrics Council on Communications & Media recently updated its guidelines for parents, encouraging families to take a thoughtful approach to the issue.

Dr. Hansa Bhargava, an Atlanta pediatrician, is an executive committee member on the council that set the guidelines with input from experts in media, child development and medicine. She says that research on the impact of media use is still in the early stages, but some patterns have emerged that make the need for boundaries more urgent and apparent.

A 2015 report by Common Sense Media found that teens, ages 13 to 18, spend nine hours a day on entertainment media, on average. For pre-teens, it's six hours per day.

"It's incredible how much time kids are spending on it," Bhargava says. "We don't know truly what the increased exposure to kids will be for the long term. "Parents definitely need some guidance around that."

As smartphones become the standard, people, in general, need to be more thoughtful about their media use, Bhargava and Crockett say.

"I think even adults are having a difficult time figuring out how to set limits for themselves that allow them to have some downtime, and to turn off," Crockett says.

Doctors and experts who work with kids are concerned about the effect that overconsumption of media will have on the development of critical thinking skills and the prefrontal cortex, or "the secretary of our brain," Bhargava says. "[It] doesn't really develop until late into teens, early 20s ... and this is when we're exposing them to so much of this."

In updating its guidelines, the AAP "came out with strong statements," she says.

The council recommends skipping media use altogether for children under 18 to 24 months, but if you let your young children use media, don't leave them alone with it. Use it with them. For children between 2 and 5 years, media use should be limited to one hour per day. The council recommends avoiding media as a method for soothing or distracting your child. Sometimes it can't be avoided, like during a doctor's visit or while traveling. But kids need to learn to regulate their own emotions.

Bhargava said the guidelines show that quality and quantity are both important factors when setting parameters around kids' use of media. It's up to parents to make the choice between 60 minutes of a low-quality cartoon versus a program that teaches language skills.

For school-aged kids and teens, the recommendations hinge on each family developing its own media use plan that outlines when, where and how kids can use their devices. The council recommends setting limits on each of those elements, with an emphasis on ensuring that kids have time for other activities — things like sleep and exercise.

"We don't want time taken away from things that we know will help children," Bhargava says. "We know school work will help them. Sleep. Physical activity. Family time creates that grounding that prevents anxiety and mental health (problems). If screen time is taking away from those activities, that's a problem."

Establishing a plan gives parents a chance to ask some fundamental questions about the purpose of handing their kids a smartphone, and the impact it has on their children and their family.

"It sounds silly to say, but nobody ever died from boredom, and a smartphone is not necessarily a 'need,'" Crockett says. "Smartphones are not appropriate for every child, and parents need to evaluate whether their child needs a smartphone, is able to discuss concerns openly with the parent as they arise, can make safe choices, and is able to handle all of the challenges that come with owning a smartphone." ♦

Ask yourself if your child really needs a smartphone. Phones have their place, but they're not necessities. "There also seems to be a constant need to be entertained, and an expectation that as a teenager, you need to have the latest phone, and as a parent, you should be providing it," says therapist Jessica Crockett.

Set boundaries. What are your kids using their devices for? Are they streaming? Are they binge-watching? Where are they using them? Parents can set rules. Pediatrician Hansa Bhargava says her 11-year-old twins are not permitted to use their phones in their rooms. They also have rules against using them during the carpool, school, homework time or dinner.

Practice what you preach. "It's true of anything," Bhargava says. "We've seen this in research with obesity. You have to emulate what you want the kids to do. That includes putting your phone down at meals."

Do all the important stuff first. Hang out with family, sleep, exercise, study, etc. Keep the conversation going, so kids learn to set their own boundaries and parents can monitor online behavior. Sexting, access to pornographic material, or cyberbullying can easily fly under the radar if parents aren't engaged.