We don't really know anything about barbecue here in the Northwest, but we're trying to learn. 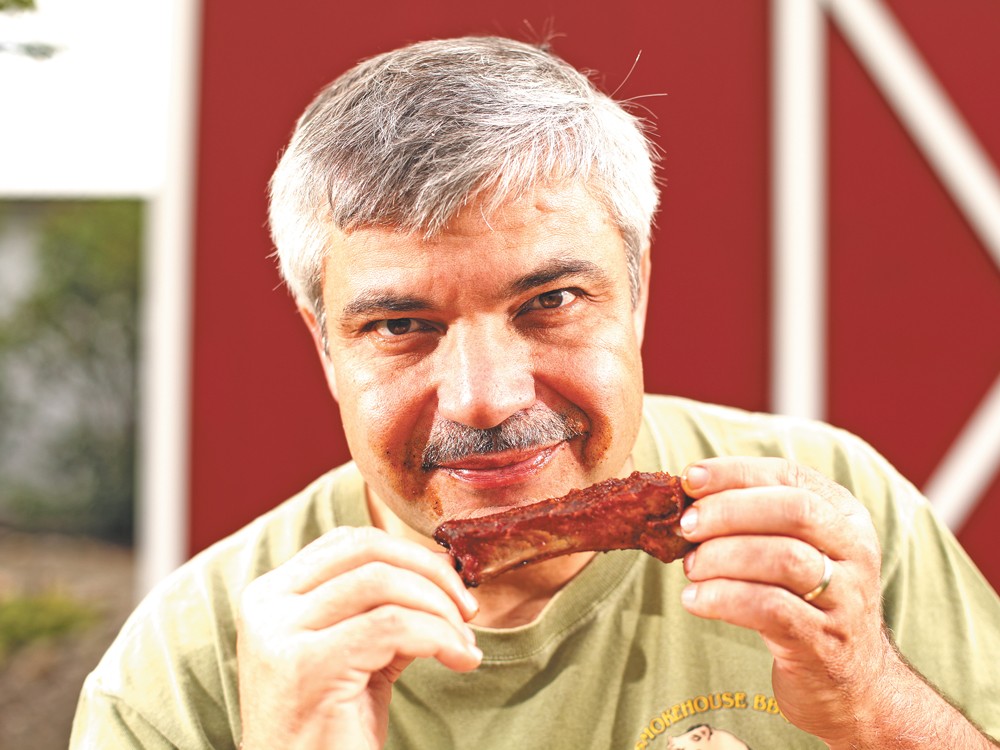 “Barbecue” is a style of food, and if Hill and his fellow certified barbecue judges have their way, more people will know this and more will eat the brisket, chicken, pork and other delicately cooked fare toward which he devotes so much of his summer. As a judge for the Pacific Northwest Barbecue Association (PNWBA), Hill finds himself traveling through the region, tasting and scoring these creations, which he’ll do at a contest in Kellogg next weekend and also at the Cheney Jubilee on July 14 and 15.

A retired Air Force master sergeant now working as a medical supply chain manager in Spokane, Hill lived throughout the country during his service.

“I always ate local food wherever I went. I’ve had barbecue all over the South: Alabama, Mississippi, Memphis. All over,” says Hill, who didn’t get into barbecuing his own meats until he bought a smoker about six years ago.

He then escalated his love for this tough-to-master cuisine about two years ago when he headed to Prosser, Wash., to complete the PNWBA’s barbecue judging course. Now, he makes his way through the region, scoring the look, texture and, of course, the taste, of competitor’s brisket, chicken, pork, ribs, salmon, sausage, tri-tip and other barbecued goods.

There are 18 judges per event, each sampling around 30 items. (“It’s only one or two bites. You don’t get full. You want an appetite while you’re judging,” says Hill.) In the upcoming competitions in Cheney and Kellogg, competitors will vie for as much as $5,000 in prizes.

While we might think of barbecue as laid-back, simple fare, the PNWBA’s judging criteria proves otherwise, as Hill describes his process with the depth we’re used to hearing applied to fine wines.

Then, there’s the appearance and texture, the criteria for which will likely shatter most Northwesterners’ perception of what constitutes excellently smoked meats.

“I use ribs as an example. A lot of people think ribs are done when the meat falls off the bone. That’s overdone,” says Hill.

The same goes with chicken. “You’ll eat barbecue chicken and the whole skin comes off. That means it’s underdone,” he says.

Kind of shatters your whole barbecue world, doesn’t it? We’ve got a lot of smoking, saucing and tasting knowledge to pick up in this neck of the woods.

At the upcoming competition in Kellogg — or any competition, for that matter — Chris Patterson will gladly spill to you all of his barbecuing secrets. Hell, he’ll even give you his recipes.

So, this is to say that he really doesn’t have any secrets.

As the head cook for Coeur d’Alene barbecue team Brown Chicken Brown Cow (or, BC2, as they call themselves), Patterson is as much of a barbecue evangelist as he is a barbecue cook. He was born in Memphis to a Southern family, so barbecue — specifically the saucier, spicier Memphis style of the cuisine — has been on his plate for most of his life, but he only came to the competitive circuit in the past few years.

“My whole idea was to promote barbecue in the area,” says Patterson.

After a career in the brewing industry, Patterson, 46, has watched as competitive barbecue and the communal, collegial culture that so often accompanies it has slowly but steadily taken root in the Northwest, a region he says is discerning when it comes to their food and drink.

That said, there still isn’t anything one could really call “Northwest-style barbecue.”

“There’s really currently not a flavor profile for this area, but that’s the fun part because it’s in its infancy,” says Patterson. That isn’t to say there hasn’t been an effort to create distinctively Northwest barbecue, as evidenced by huckleberry barbecue sauces common to our region’s competitions, festivals and restaurant menus.

If you’re looking for enthusiasm for this style of cooking and the process required to create it in this region, take a look at the Cheney Police Department, which was integral in bolstering the Cheney Jubilee’s competition. The department’s former chief, Jeff Sale, a devoted barbecue cook, helped foster a love for the food during his tenure, and soon the department had its own team. Now, the department also has its own smoker — a converted police car that was gutted with the help of local auto mechanic students and made into a fully functioning smoker. The meat is smoked in the passenger compartment of the vehicle, while the fire is burning in the trunk of the car, says Commander Rick Campbell, who will again join the team at July’s competition, hoping to improve on last year’s seventh-place finish. They’ll get some help from their former chief, too, who will be traveling up from his new post in Bend, Ore., to lend a hand.

Competitors like Patterson, as well as judges and PNWA representatives, have noticed more barbecue restaurants popping up, but they acknowledge that we’re a long way from barbecue rolling out of every backyard in the Northwest.

“Down south, everyone has some sort of pit or smoker and it’s a part of their culture. Here, it’s mostly salmon that we’re smoking,” says Hill.

But the fact that barbecue hasn’t taken hold is a bonus, says Patterson.

“It’s starting to have its own profile. What direction it’s going to go is anybody’s guess,” he says.

Worthy barbecue in Garland; plus, a new burger spot in Sandpoint