Lori SiJohn is as resourceful as she is resilient.

After serving in the Navy and law enforcement, SiJohn applied to both truck driving and beauty school. Although she never made it to beauty school, she's built a rapidly growing health and beauty products company from her Plummer, Idaho home.
click to enlarge 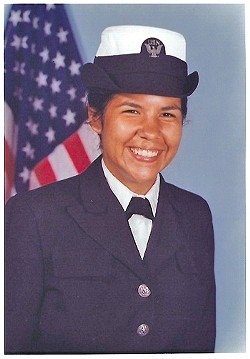 Lori SiJohn in her Navy uniform

Sailor Girl Soap and Supplies offers 15 all-natural, handmade products, ranging from soaps and cleansers to butters, balms and lotions. Most products were made in response to family requests, such as a deodorant for her grandson and a muscle relief bar for a cousin.

Her eldest daughter, Shaina Nomee, encouraged Lori to transform her grief and talents into a business. "She's always been my hero," says Nomee, who at age 6 wrote a book about her mother and asked her to send it to the president. (SiJohn couldn't bear to part with it.)

The admiration between mother and daughter is mutual. "We wouldn't even have [the business] if it weren't for Shaina," says SiJohn, who credits her daughter's marketing, social media and website skills for helping catapult the business online and into three states.

Besides their website (sailorgirlsoap.com), Sailor Girl is offered via HuesBox, an online subscription-based company started by a mother-daughter team to highlight minority-owned health and wellness businesses. Sailor Girls is also in Oregon at the Tamástslikt Cultural Institute in Pendleton, home to the museum of the Confederated Tribe of the Umatilla Indian Reservation-Cayuse, of which mother and daughter are members. In Idaho, find the products at Willow Market and Boutique in Coeur d'Alene and Brickwall Beauty Bar in St. Maries; in Spokane, at Modern Tipi in the Saranac Commons and Window Dressing's Pop Up Shop.