Snakes in the Class

Young Kwak
Brie Cole (left) and Sarah Wier face off in the Kelly the Destroyer versus the Springfield Cobras at Lewis and Clark High School.

the start of spring break, and the cast of Kelly the Destroyer versus the Springfield Cobras is squeezing in a pre-weekend rehearsal. Barely three weeks from now they'll perform the world premiere of this original musical, which has been exclusively written for and developed by the Tiger Drama program at Lewis and Clark High School.

Sporting purple T-shirts emblazoned with the production's title, the teenagers grab hoes and a giant snake puppet and assemble for what one of their instructors describes as an "Ozark Bollywood" number.

Opening night brings with it a kind of pressure that only those who expose themselves to the vulnerability of the stage can fully appreciate. A world premiere — one the Tiger Drama Department hopes will resonate with high schools across the country — brings more pressure still.

But this year an added stressor looms: A month of newly introduced Common Core standardized testing commences in May. So while these students are busy memorizing lines and choreography no one has ever spoken or danced before, they do so knowing that they also need to be cramming for tests none of them has ever encountered before. And that, in a tidy circle of life imitating art imitating life, is what Kelly the Destroyer is about.

The musical's short but accelerated history begins last spring, when drama teacher Greg Pschirrer and Suzanne Maguire, the school's coordinator for the federal Gear Up Grant, were planning the 2014-15 program. The theme they envisaged was "From Page to Stage," highlighting the creative process and "the power and the value of arts education," says Maguire. "We thought, what if the kids could see what happens when you take something from its inception and bring it all the way forward?"

She called Rob Hartmann, an old college friend who now teaches at NYU's Tisch School of the Arts, and asked him to compose an original song. He and his writing partner Katie Kring offered to go "one better" — a full-blown musical.

The plot they drafted

combined the sci-fi takeover paranoia of Invasion of the Body Snatchers and The Stepford Wives with Hindu mythology and a bizarre 1953 news story in LIFE magazine. In their musical comedy, a new student, Kelly, arrives at Cotesville High in Springfield, Missouri, to find that a group of high achievers called Cobras (owing to their ruthless ambition and reptilian focus) are plotting world domination under the direction of a sinister educational consultant named Miss Hannah. Their strategy relies on the unforgiving regimes of standardized testing.

Brittany Mendoza-Peña, a curly-haired, bright-eyed junior, plays Savannah. "She's one of the Cobras — Hannah's masterpiece. She's an object of envy throughout the whole show."

Along with her castmates, Mendoza-Peña has helped shape her character by providing feedback to Hartmann and Kring.

"It's been very nitpicky," she laughs. "In the first draft, I had a question about my relationship with Kelly, the protagonist. I was wondering how we would have such an arch-nemesis-type relationship if we'd only talked twice. So they incorporated more scenes of the Cobra trio confronting Kelly."

That ongoing process has resulted in five script revisions as well as a form of cross-generational pop-cultural exchange. In response to the students' questions, the writers have been using an online forum to explain motives or share video clips that address the sci-fi cinematic origins of Kelly the Destroyer. For reciprocal context, Maguire has been forwarding Hartmann and Kring information about the new testing that juniors like Mendoza-Peña are preparing to undergo. 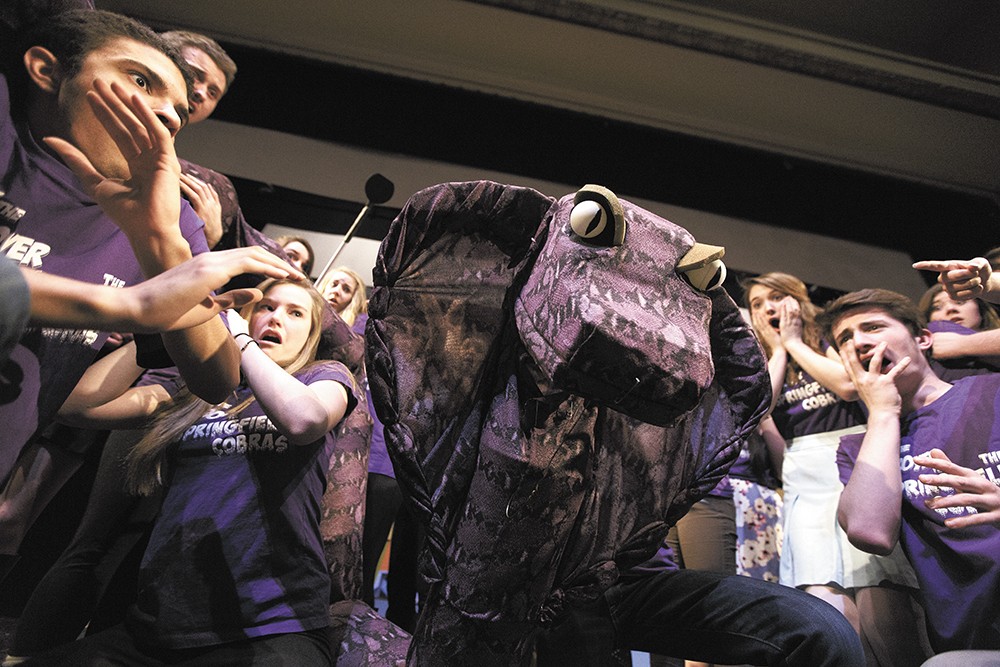 Young Kwak
Kelly the Destroyer was written for the LCHS drama department and carries with it a critique of standardized testing.

"A lot of us really empathize with the characters and the amount of stress they have [over] standardized tests, and new things being added to the curriculum that they never anticipated," says Mendoza-Peña. "We feel like we're being spread very thin." Out of the cast of 26, she's one of the 12 who will be taking the new Smarter Balanced assessments and one of the 15 who will be taking one or more Advanced Placement tests in May. During that time, they'll also have to sit for the SATs.

For Maguire and Pschirrer, Kelly the Destroyer is meant not only to serve as a fun, unique learning experience for the students, but also as a medium for the "much bigger message" of the implications of Common Core curriculum and the way it threatens to diminish the arts.

"The soft skills that students learn when they're taking a production from the beginning to the end are valuable for anywhere they're going to go," Maguire says. "The collaboration, the teamwork, the dedication, the focus, the professionalism — all of those are going to apply."

"I don't think people have really stepped back to look at the give-and-take in the choices that we make in the way we assess our students," adds Pschirrer. "Perhaps it'll make people re-examine our priorities in our current educational system and realize that we're a system in turmoil right now." ♦