How a justice reform effort to empty the jail and relieve a backlogged system got off track, and what that means for low-level offenders 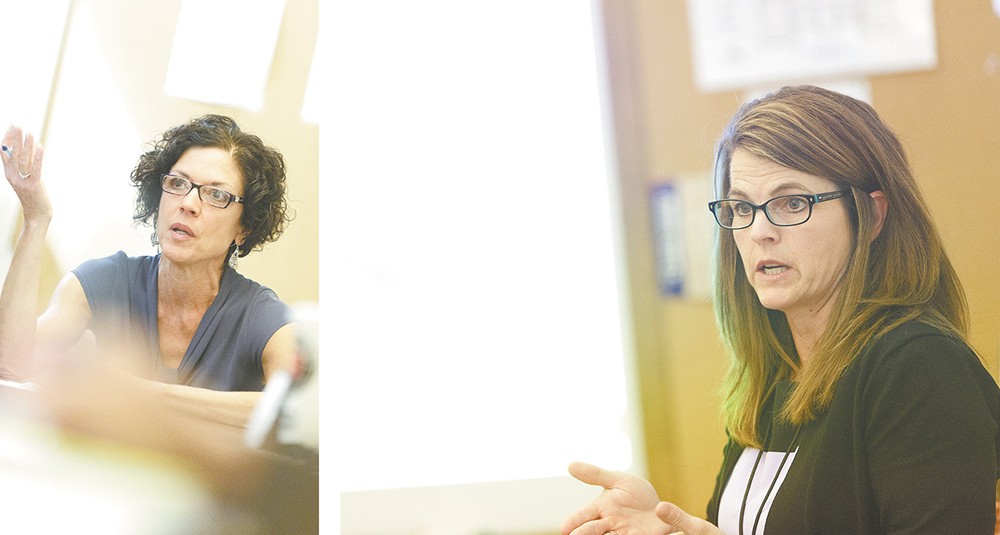 Men in yellow jail smocks sit behind the table of attorneys and wait to be called.

One seasoned prosecutor sits alongside a rotating cadre of public defenders in a jailhouse courtroom where defendants appear before a judge via teleconference.

Most of these cases are nonviolent, low-level felonies — property and drug crimes — but felonies nonetheless. Each one is being considered for "early resolution," based on the nature of the crime and a defendant's history.

The Early Case Resolution system, known as ECR, can be a release valve for overflowing dockets and overcrowded jails. The idea is for prosecutors to hand over all their evidence — for ECR cases, typically that's just a police report — to defense attorneys within 24 hours of charges being filed. At the same time, prosecutors offer a plea deal, which is a vastly accelerated timeline compared to standard criminal cases. By the time defendants appear in court, they have a decision to make.

The program hinges on a team of defense attorneys and prosecutors working together to resolve a high volume of cases. However, since the program appeared in Spokane County, the Washington State Supreme Court imposed new caseload limits on public defenders.

The consequence? To lessen workloads, ECR cases are now spread around the entire public defender's office, instead of being handled by a specialized team intimately familiar with the program.

"When you have lawyers who are covering ECR, plus handling their own trials, it becomes really difficult to give the ECR case the attention it deserves," says Spokane County Superior Court Judge Maryann Moreno, who presided over ECR cases when the program first arrived in 2009.

Public defenders still see the benefits in the program's efficiency for some of their clients. They get out of jail quicker, and potentially receive lesser sentences. For others, shoving cases through the system is problematic. They argue that the pursuit of swift justice might come at the expense of its quality — especially now that attorneys less familiar with ECR processes share the caseload.

"To plead someone to a felony on a fast pace, you often don't get the investigation," says Karen Lindholdt, an attorney who recently left the Public Defender's Office. "You get the police report and, generally, an offer of credit for time served."

People often take the deal just to get out of jail — with little thought to the fact a felony conviction can follow them for life.

Spokane County hired consultant David Bennett in 2007 to study the criminal justice system and make recommendations for reform. His first key recommendation was to institute the ECR program as a kick in the pants to police and prosecutors.

Jails can't hold a person for more than 72 hours without charges on file. As Moreno described to the Inlander in 2012, that meant people were released without knowing when to return to court. They would miss the court date, a judge would issue a warrant and the cycle started again. At the time, Moreno pointed out the absurdity of marijuana possession cases that took two years to resolve.

That changed when the ECR program began.

A year after Bennett's report, Spokane assembled a team of veteran prosecutors and public defenders to handle ECR cases, with Moreno overseeing them.

The system demanded a team of experienced lawyers who could "size up" a case quickly, Moreno says now. "It was designed for low-level offenders who really wanted to take responsibility, perhaps get a lesser sentence and get out of jail faster. We had a nice team concept."

The county collected data to evaluate whether or not the system was working, but nobody knew what to do with it, Moreno says.

In 2013, the Blueprint for Reform, another report with suggestions for criminal justice reform in Spokane County, recommended that the program get a second look. That hasn't happened within the county, but Lauren Block, then a doctoral student at Washington State University, dug into the data before and after ECR was implemented. She published her findings in her dissertation last year.

Block found that the median time it took to resolve ECR cases for in-custody defendants was more than cut in half, from 126 days to 50 days, when compared to cases before the program began. For defendants awaiting charges out of jail, the median number of days was reduced from 133 to 54. People were also sentenced to prison time less often, and were more likely to receive suspended sentences, where the charge is dropped if they comply with probation.

Block also found that ECR significantly reduced the number of people who missed court dates and violated release conditions, such as failing a drug test. She surmises this is due to the accelerated timeline, which gives people less of a chance to reoffend while another case is still pending. Or perhaps the reason has to do with the types of cases chosen for ECR. Whatever the reason, that means less time and resources spent trying to resolve a single case.

One significant hole in Block's research, she points out, is an analysis of the strength of evidence in ECR cases.

Aside from the abandoned team approach to ECR, it's this factor that concerns public defenders who say they don't have enough time to question the police, track down witnesses or gather forensic evidence.

Defendants always have the option to move their case into the standard criminal caseload. However, when an offer is on the table, defense attorneys are obligated to tell their clients.

Multiple public defenders say that under these circumstances, people will often plead guilty just to get out of jail, even if it means a felony record. The system could also disincentivize therapeutic court options, says Spokane County Deputy Prosecutor John Grasso, who decides which cases qualify for ECR.

Grasso says the ECR docket may have had an impact on drug court participation. For some defendants in ECR, prosecutors will offer two options: drug court or a straight-up guilty plea. Drug court usually means slightly more time in jail and more contact with the court after release.

"It's impossible for them to act on the offer as quickly as we make it," he says. "So these cases tend to get treated like regular prosecution cases because of that."

Grasso says that about 1,180 of the 4,215 felony cases this year have gone through the ECR program as of the end of November.