NEWS: Spokane Police Department have released body camera video from the fatal shooting of David Novak. The roughly minutelong video shows the short time that elapsed from when cops arrived to the scene of reported gun shots, say they heard what they thought was gunfire but turned out to be Novak striking his own truck with a baseball bat,  and shot him. The internal investigation is ongoing.

NEWS: Spokane International Academy charter school will be able to have all its K-8 students on one campus come next year.

Trump accuses House Intelligence Committee leader of treason
In another of his Sunday tweet storms, President Donald Trump accused Rep. Adam Schiff of possible treason for the way he described Trump's call with the president of Ukraine, in which he pressed the leader to look into political rival Joe Biden, the New York Times reports. 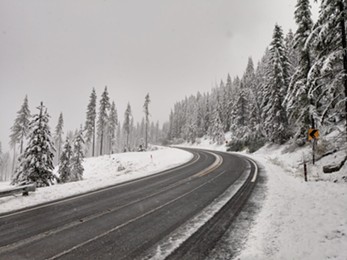 Washington State Department of Transportation photo
Sherman Pass in Ferry County.
It snowed this weekend. It's still September.
Record snow fell in Spokane and the Inland Northwest this weekend, knocking out power to many with the unseasonal weather taking its toll, the Spokesman-Review reports.

Cities, counties support Boise in anti-camping case
More than 80 entities signed on as "friends" with the city of Boise in the court case between the city and a man fighting its anti-camping ordinance as unconstitutional, the Idaho Statesman reports.