Snowball's in Their Court

Will the state Supreme Court weigh in on proposed expansion at Mt. Spokane? Plus, vetoes by Inslee and Otter 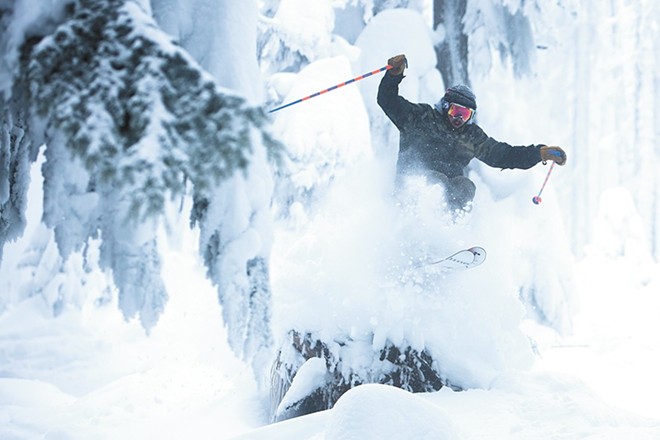 Conservation groups are battling against an expansion of Mt. Spokane's ski area.

Conservation groups are hoping that the Washington State Supreme Court will weigh in on the proposed MT. SPOKANE ski area expansion.

In March, Court of Appeals judges found 2-1 that it was OK for the state Parks and Recreation Commission to designate a portion of Mount Spokane for recreation, which would allow for a new ski lift and runs on the west side of the mountain.

The Lands Council and other defendants have asked the Supreme Court to review the case, on the grounds that the commission's own policies require it to protect that type of land.

"The overarching problem with the expansion is that this is a state park, and the west side, where they're planning on developing, is a pristine forest with old-growth stands sprinkled throughout it," says Mike Petersen, Lands Council executive director.

The Spokane Tribe has also supported the arguments against the expansion, showing that the area has cultural and historical significance to the tribe and should be maintained as habitat for wildlife.

"The commission has a policy that says, 'Where significant natural and cultural resources exist at a site or within a landscape, agency staff must protect the integrity of all significant resources.' Some people can say there's a balance that has to be struck between recreation and protecting natural resources," Petersen says. "That's really at the heart of what I think the Supreme Court needs to decide. Where do you strike that balance?"

The nonprofit that operates the ski area, Mt. Spokane Ski & Snowboard Park, has all the needed permits to start work on the expansion, which could move forward this year unless an injunction or similar court order is filed. (SAMANTHA WOHLFEIL)

Last week, Washington Gov. Jay Inslee vetoed a portion of a bill that would help school districts BUILD NEW SCHOOLS in rural areas. Now, rural districts worry that their options are limited in planning for overcrowding in schools.

"With this veto today, [the governor] is ensuring schools around the state will not be allowed to modernize and students will continue to be educated in portables," Rep. Bob McCaslin (R-Spokane Valley), the bill's lead sponsor, said when learning of the governor's veto.

The bill would authorize districts to build schools outside of a designated urban growth area, but Inslee's veto means that only schools in Pierce County are authorized to do so.

"While this bill adequately addresses many aspects of the issue, I remained concerned about three items that I would like to resolve with the legislature during the special session," Inslee wrote in his veto letter.

The three items: First, that any urban services used for a rural school be limited to only supporting the long-term needs of the facility. Second, that the land surrounding any new rural school "maintain its rural character and housing density." And third, that districts only build outside of the urban growth area after demonstrating that there is no other land available.

If the legislature does not override the veto or find a way to address Inslee's concerns, it could impact school districts in Eastern Washington.

"Given the limited amount of property available to build new schools to meet enrollment growth and state-mandated class size reduction, SPS has been supportive of legislation that would allow school districts to build outside the UGB [urban growth boundary] within limits, and through a thoughtful approval processes," says Spokane Public Schools spokesman Kevin Morrison. "It appears the governor's veto may make that option for schools unlikely."

Neale Rasmussen, director of fiscal services for the East Valley School District, says the district has land outside the urban growth boundary that it wouldn't be able to use for a new school if no bill is passed.

"If we want to build anything new, which we may need to do at some point in the future, not having this bill may impact our ability to build on land we already own," Rasmussen says. (WILSON CRISCIONE)

Idaho Gov. Butch Otter has missed VETO DEADLINES before. That was the case two years ago, when Otter's veto of a bill banning instant horse-racing gaming terminals was ruled invalid in court because he missed the veto filing deadline.

Now, his veto of the Idaho Legislature's controversial bill to repeal the 6 percent sales tax on groceries is also the subject of a legal challenge. Two conservative Republican Idaho state representatives, Ron Nate and Bryan Zollinger, argued that Otter had missed the deadline by failing to veto the bill in the 10 days required by law.

Otter claims that the 10 days only started as soon as he received the bill from the legislature — on March 31 — while Nate and Zollinger argue that the clock started ticking the moment the legislature adjourned on March 29.

From the governor's perspective, the evidence is obvious: The Idaho Supreme Court has already ruled on this issue, back in 1978, concluding that "presentment," not "adjournment," was the relevant marker for the veto deadline.

"That's been the case law precedent that has guided every Idaho governor since 1978," says Otter's spokesman Jon Hanian.

But attorney Bryan D. Smith, arguing the case against the governor, tells the Inlander there's an easy response: The court got it wrong in its split decision in 1978. The plain text of the Constitution says "adjournment," but the court decided to read that as "presentment."

"They know it's not there, but they read it into that," Smith says. "They amended the constitution on the bench."

Noting that two members of the court had already criticized the 1978 ruling, Smith hopes that the court will overrule the precedent. (DANIEL WALTERS)