So Fresh, So Clean

Hundreds of volunteers give East Sprague a spring makeover 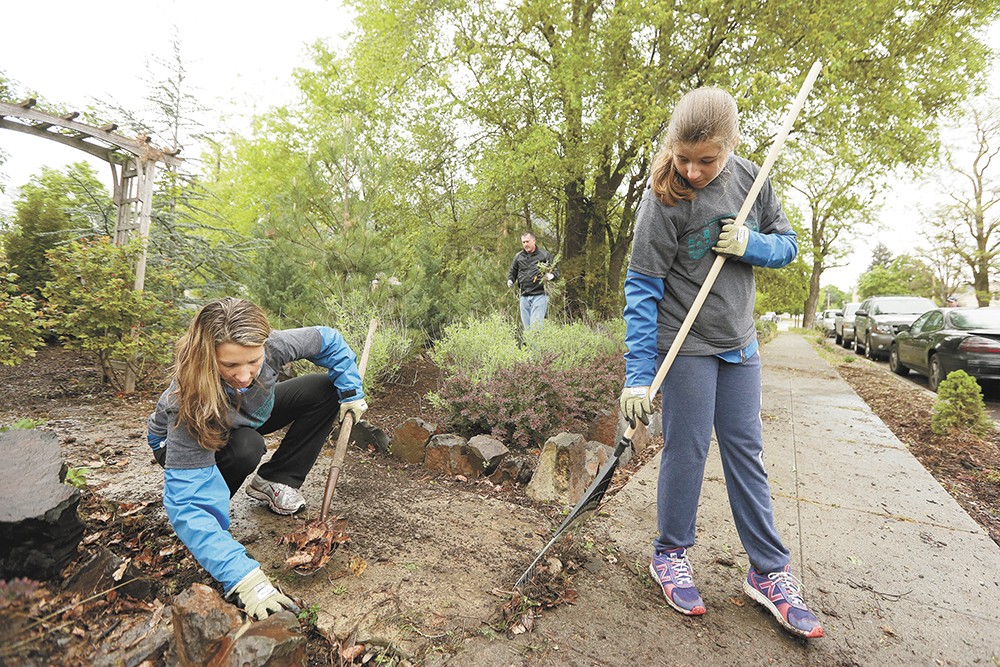 Young Kwak
Landscaping was a big part of the Cleaning from the Corridor project.

Up and down East Sprague Avenue on a drizzly, overcast Saturday morning,

clusters of volunteers gathered every half-block or so for the community spring "Cleaning from the Corridor," their matching, bright-colored T-shirts a marker of the company or nonprofit they were representing: bright red for the "Cougs in the Community," bright yellow for the "Rebuilding Together" crew and so forth.

Not all groups were so marked. The Spokane Preservation Advocates used a folding sandwich board propped just off the sidewalk, announcing their annual effort at preserving a cool building. On this day, they're swinging hammers through and prying at the corners of a cheesy, '80s-era building façade to reveal the original brick underneath at a building at 1720 E. Sprague, between the Checkerboard Bar and Vien Dong restaurant. Around the corner, a group of local Mormon kids and missionaries work at reclaiming a jungle of a yard on the corner of Napa Street and East First Avenue, their distinct, church-issued nametags taking the place of a signature T to indicate that they're working together.

The past few years, this day of scrubbing and refurbishing was known as "Cleaning from the Core" and focused on downtown Spokane between Riverfront Park and I-90, according to Alicia Powell, community program coordinator for the city's Office of Neighborhood Services. She helped pull together and coordinate everyone from the firemen clearing out trash in some off-Sprague alleys to artists and volunteers painting murals on storage containers.

That was Mayor David Condon's first project of the day with his kids, he said, as he strolled up Sprague solo in a sweatshirt around 10 am. After dropping them at home, he returned to work on the community garden a bit.

Down the sidewalk, sign artist Michael Ruby led some volunteers filling in the outline he put on the side of the Boyd-Walker Sewing Machine building, an artistic representation of the history of sewing.

"I made patterns like a big coloring book," Ruby says, using pencil and paper to work out the scene before putting the outline on the bricks in advance of the brush-wielding volunteers' arrival. Ruby will return later to add shading and detail to the new piece, after the volunteer day and rainstorms have passed.

There's a lot of energy in the neighborhood this morning, and a palpable sense of community. Different squadrons of volunteers do work that could make a difference for years to come on this stretch of road that some cynics derisively call "Hookerville," despite concerted efforts to change the face of the neighborhood.

Ruby has worked off and on in the neighborhood since the '80s and opened his own shop, the Sign Art Studio, a year ago on the corner of Riverside and Madelia Street. "It's changed so much in just the last year," he notes, and mostly for the better.

Nearby, Kathy Derting, a regional property manager for real-estate management company Greystar, is one of the volunteers tackling an Extreme Makeover-level overhaul of a house on East First Avenue, a project involving 12 different sponsors who sent teams and materials to fix the plumbing and electrical systems, do landscaping and fix a precariously loose porch roof over the front door.

This house is a microcosm of the larger Cleaning from the Corridor project, with volunteers from Greystar, the national nonprofit Rebuilding Together and the Washington Multi-Family Housing Association partnering with a number of other groups to make one family's home a whole lot better off, an effort that will reflect well on the surrounding homes and streets as well.

"These homeowners love their homes and want to stay in their homes," says Rebuilding Together's Victoria O'Banion. "Some of the repairs they need are just out of their reach."

Thanks to efforts like the collective one Saturday on East Sprague, the vision many have of a thriving, beautiful historic neighborhood is a couple of steps closer to being within grasp. ♦