The campaign to unseat Matt Shea gets both political and personal 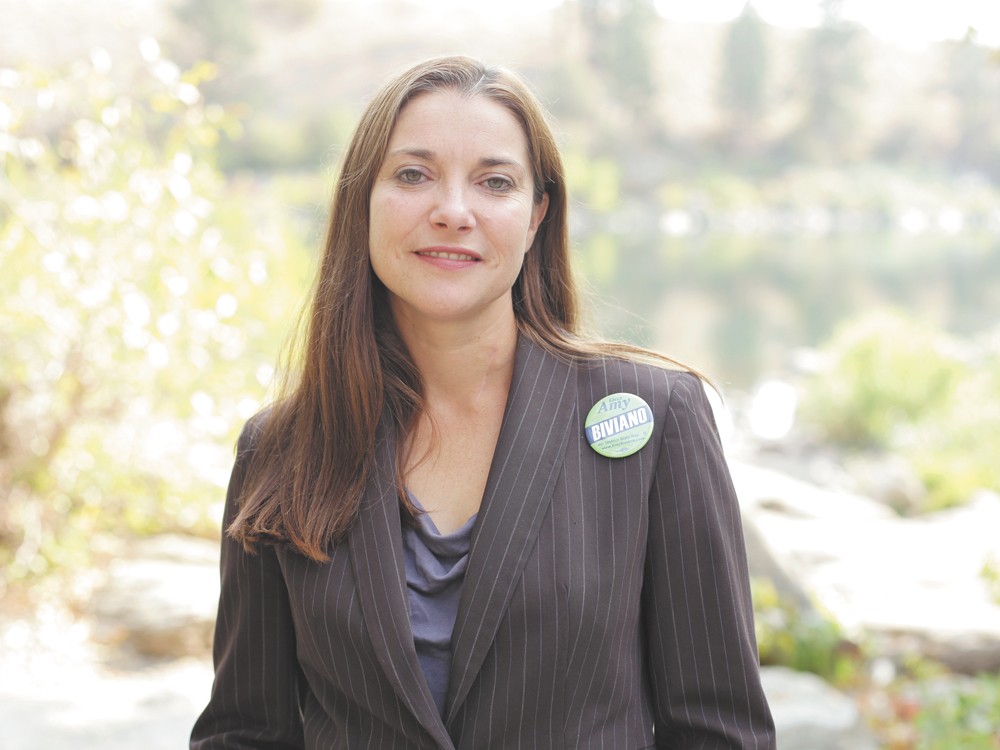 A gunman, in blurry black and white, sticks a pistol past the passenger seat and straight at whomever is reading Amy Biviano’s campaign mailer. Law breakers, the mailer proclaims, should not be law makers.

It may be the most personal piece of campaign literature in local politics this year, and it’s a symbol of the tone in the 4th District legislative race: both candidates say they’re victims of intimidation, and both have demonized their opponents.

Amy Biviano, the Democratic challenger in a very Republican district, tries to show her opponent, state Rep. Matt Shea, R-Spokane Valley, as extreme, ineffective and dishonest. But Shea says all those accusations are a distraction from the fact that his opponent is a “radical pro-choice socialist.” It’s a campaign fought on two fronts: personal and political.

The heat of the campaign began last May. Shea’s campaign signs were vandalized with swastikas and profanity, and he saw it as a hate crime. “This is clearly an attempt to threaten, harass and intimidate me and my family,” he wrote on his campaign site. Biviano later accused Shea of “intimidation” when he posted photographs on Facebook of himself smiling outside her house and refused to remove them.

Biviano’s campaign mailer, however, was inspired by Shea’s conflict with a reckless driver last November. Matt Shea drew a loaded gun — with an expired concealed weapon’s permit — and the other driver saw it. Shea placed the gun on his seat, then continued to follow the driver for a few more blocks.

Biviano’s mailer, to be clear, is deceptive: She quotes the initial police report that indicated Shea had pointed his gun at the victim, but does not quote the follow-up investigation where the victim said he “did not believe that the driver of the truck pointed a gun at him at any time.”

But Shea’s responses have also been misleading: He posted a document to his Facebook page, purporting to be an affidavit from an unnamed fourth witness, testifying to Shea’s “calm demeanor,” that he only pulled out his gun when he was approached by the other driver and that he or she personally knew Shea had experienced “multiple death threats.”

But the police report only lists three witnesses, and Shea’s alleged witness was not among them.

“It doesn’t appear to correlate with the police report or the court proceedings,” Spokane County Sheriff Ozzie Knezovich says. “Where did the fourth witness come from and who is it? That’s a legitimate question.”

Last Friday, The Inlander asked Shea via Facebook who the witness was and requested a copy of the affidavit. But by Saturday, Shea had removed the question from his Facebook page without providing an answer.

Indeed, Shea has repeatedly refused to respond to local journalists’ questions and has blocked the Twitter accounts of reporters at various news outlets. The Inlander emailed his campaign for an interview, offering to publish the entire audio recording online, but he never responded. Knezovich says he’d encouraged Shea to talk with the media about the driving incident, but Shea never did.

“I can’t speak for Matt on that,” county GOP chair Matt Pederson says about Shea’s refusal to talk to the media.

Some prominent conservatives have distanced themselves from Shea: In 2011, the late Sen. Bob McCaslin, R-Spokane Valley, wrote to the board of county commissioners to tell them “under no circumstances would I support Matthew Shea for any public office.” County Commissioner Todd Mielke wrote a statement that Shea had demonstrated “spontaneous, extreme anger” and profane language during a 2010 legislative session.

Still, Shea has a long string of Republican endorsements.

“He supports the Republican Party platform, which is the platform I most line up to,” Spokane City Councilwoman Nancy McLaughlin says. “Less government. More free-market solutions. Lower taxes. So that’s why I support him.”

Shea brags about having the “most conservative” lifetime ranking from the Washington Conservative Union, a conservative organization that tracks votes in Olympia. He pushes for parental notifications for abortion, more gun rights and lower taxes.

To some, that ideological purity is a bad thing. Spokane businessman Mike Senske generally supports Republicans, but he’s opposed to Shea. “He seems to view politics as a zero-sum game and is very inflexible in that approach,” Senske says.

Shea does have some bipartisan successes: One bill required large cattle trucks to stop for inspection. Another required worker compensation payments to be paid out gradually instead of in one lump sum. And yet another allowed for easier, environmentally-friendly dock manufacturing.

Biviano, by contrast, downplays her party affiliation. “We should not be debating big vs. small government, left vs. right politics or cutting vs. spending approaches,” Biviano writes on her website.

She says she considers herself a “fiscal conservative,” and she does have some mildly conservative positions: she would let the private insurance industry get involved in workers’ compensation insurance and wants to balance environmental regulations with business concerns. Her signature policy idea is to reform the Business and Occupation tax. Currently, she says, the B&O tax is calculated on gross receipts.

“You can literally have a loss, and it still gets taxed,” she says.

She wants to allow businesses to deduct either their salary or manufacturing costs. To make up for the loss in state revenue, she suggests increasing the B&O tax rate on the remaining profits, and consider closing loopholes for companies like Bank of America and Boeing.

But her other two major policy planks — increasing funding for education and restoring funding that tracked domestic violence cases — would require even more revenue.

“There are other areas where we could cut,” Biviano says. But when asked where she’d make the cuts, she laughs and says, “I’ll get back to you.”

When we followed up on Monday, she said: “All options are on the table, and we need to get very creative about public-private partnerships.”

But regarding almost every other question about policy, her answers pull from the Democratic platform. She’s against charter schools, for gay marriage and is pro-choice.