Some neighbors in Lincoln Heights want stop signs, but Spokane leans toward "traffic calming," and there's a reason 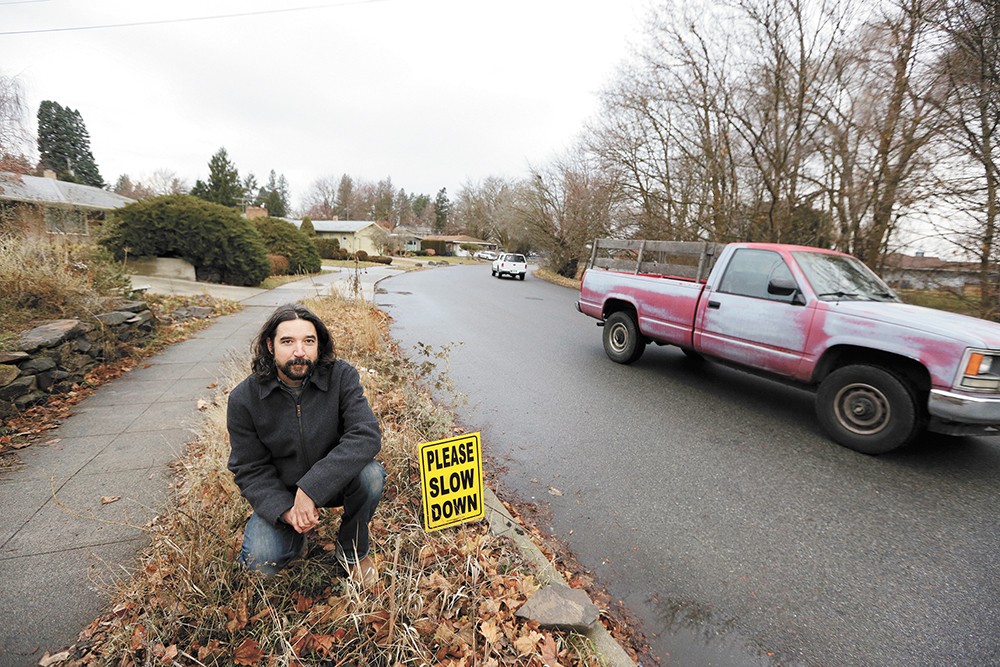 Young Kwak
Patrick McKann has been working with his neighbors to ask the city for help slowing down traffic in Lincoln Heights.

Move to Spokane from another small or mid-sized city,

and one of the first things you may notice is the lack of stop signs in residential neighborhoods.

At least, that's one thing that stood out right away for Patrick McKann, who now lives in the Lincoln Heights neighborhood on Spokane's South Hill.

"I've lived in a bunch of places, and I've never seen a place so averse to stop signs," says McKann, a former statistician now working to start a company that makes yurts.

A small yellow "Please Slow Down" sign sits outside his home off the residential loop that starts on East North Altamont Boulevard. Just up the block, off one branch of a Y-intersection, another neighbor has the same sign. A few houses away on the other branch of the Y, another neighbor has a child-sized plastic green man holding a flag at the end of their driveway.

Their reminders are meant to slow down the drivers who come peeling in off the Altamont arterial, where the speed limit is 30 mph. A series of Y-intersections and a lack of signs in the loop seems to encourage a slingshot effect, with people accelerating into the neighborhood where McKann often walks with his 7-year-old daughter and 9-year-old dog.

But in Spokane, unless there is a side street meeting a main arterial, there's a preference for "uncontrolled" intersections, where drivers should follow the right-of-way. A refresher for those who haven't taken a driver's test recently: that means slowing down as you approach an intersection, scanning for traffic, and if there's a vehicle coming on the right, you yield to that vehicle. If there's a vehicle on the left, and no one to your right, you have the right-of-way.

"Stop signs are not intended to be traffic calming, they're intended for specific collision reduction," she says. "The research we've read is if you overuse stop signs, people ignore them. One of the challenges is that you have to use what is going to be an effective tool."

But a lot of people don't remember or follow the right-of-way properly, McKann says, and all it takes is spending a short amount of time on his street to see why he and others worry that something terrible could happen if traffic isn't slowed down.

"There's a huge amount of pedestrian traffic and these huge intersections," McKann says. "So when you're walking your dog or whatever, someone will come around the corner and you hope they see you."

For more than a year, a handful of passionate neighbors in Lincoln Heights have tried to get the city to help slow traffic through the area, asking the police to enforce speeding in the area and specifically requesting stop signs from the street department.

That's how McKann says he learned the city prefers other "traffic calming" measures, such as bumping a sidewalk curb out further into the street, or creating a traffic circle, which forcibly slows vehicles and can't be ignored as easily as a stop sign.

But in most cases, getting traffic-calming measures can take years, leaving the concerned neighbors to question why there isn't a faster way to get people to slow down.

in slowing traffic in front of his house earlier this year, he learned others in his area had been trying to do so for years. Finally meeting up with each other this spring, they approached the city's street department and asked for help.

The group soon learned that aside from asking for a police officer to come enforce traffic violations for a day, many more steps would be needed for things to change.

First, the neighborhood needed an updated traffic study to show the number of cars that travel through their area and how fast they're going. City traffic engineers laid out cables to track traffic volumes and vehicle speed this spring, and also looked at crash data to see whether any intersections would qualify for a stop sign.

That should be enough to warrant stop signs at least somewhere, right?

As city engineer Bob Turner wrote to McKann and others who'd asked for the help, stop signs have specific federal guidelines for when and where they should be installed, and "they are not to be used for speed control."

"Installing a stop sign where the traffic volume is relatively low can create an unsafe situation," Turner writes in a March email. "If there is not a lot of traffic volume, a person stopping at the stop sign may not believe it is necessary and then roll through it or not stop at all which is even more dangerous."

Guidelines in the "Manual on Uniform Traffic Control Devices," issued by the Federal Highway Administration, say stop signs should only be used at 1) an intersection of a less important road with a main road where relying on right-of-way could be dangerous 2) a street crossing at a through-highway or street 3) an intersection without a signal in an area that uses signals elsewhere or 4) where there are high speeds, a restricted view or crashes that indicate a need for one.

If none of those apply, traffic calming such as "traffic circles, bump outs, interactive speed signs, and other options" could be used.

Based on the average to below average data from the Lincoln Heights study, Turner encouraged the neighbors to create a traffic subcommittee of their neighborhood council to potentially apply for money from the traffic-calming fund, which is generated by red-light-camera revenue.

To apply for a project from traffic-calming funds for the coming year, the neighborhood council would need to apply between January and March. After projects are selected, the City Council will vote on which projects to ultimately approve in November or December 2020. In the fastest example, design for the project would take another year after that, and then potentially go out for bid and construction in 2022.

While it's definitely possible for projects to get fast-tracked if a real emergency exists, Feist says, projects typically are included on the city's 6-year plan for roads, meaning it could be years before a traffic-calming project is built, even after it is approved.

There's even more uncertainty as the city waits to see how Initiative 976, which dropped car tabs to $30, will reduce the city's ability to get grants from the state. If it holds up in court, the measure will already have put a $3 million per year dent in the city's budget for road projects by eliminating the local Transportation Benefit District.

"We just think they're crazy," McKann says of the city. "We just don't understand why we can't do a cheap solution. Instead, the road that we're down now is we're going to ask for hundreds of thousands of dollars to put in a roundabout, and do all this stuff that OK, it'll work, too, but I'm pretty sure stop signs would take care of a lot of this."

There are plans to add stop signs in the Lincoln Heights area on Mount Vernon and Fiske streets where they intersect with 27th Avenue, which is being turned into an arterial, Feist says. The City Council will be considering an update to the city's arterial map on Dec. 16, which could also result in more stop signs along streets that get the faster designation as a main route.

Still, it leaves McKann and his neighbors waiting for a solution outside their homes. At the end of the day, they really just want people to slow down, whether that's with a stop sign or not.

"We were just looking for the cheapest, quickest way to do that," he says. "Maybe in two years, our proposals happen. But in the meantime? Nobody's been killed yet. We just don't want that to happen." ♦