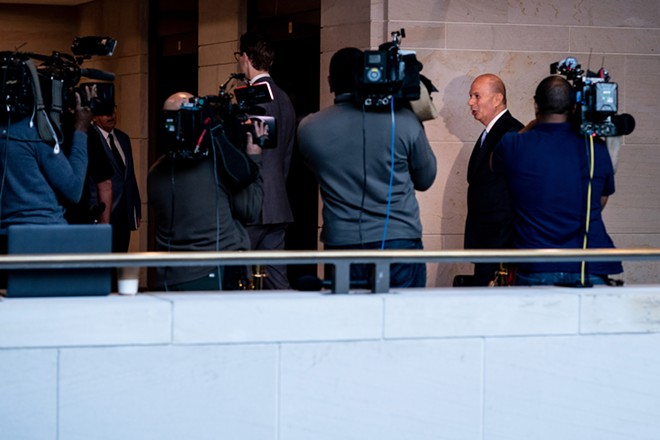 Erin Schaff/The New York Times
Gordon Sondland, the U.S. ambassador to the European Union, arrives for closed-door meeting with House impeach investigators on Capitol Hill in Washington on Oct. 17, 2019. Sondland, in four new pages of sworn testimony released on Tuesday, Nov. 5, 2019, confirmed his involvement in essentially laying out a quid pro quo to Ukraine that he had previously not acknowledged.
By Michael S. Schmidt
The New York Times Company

WASHINGTON — A critical witness in the impeachment inquiry offered Congress substantial new testimony this week, revealing that he told a top Ukrainian official that the country likely would not receive U.S. military aid unless it publicly committed to investigations President Donald Trump wanted.

The disclosure from Gordon Sondland, the U.S. ambassador to the European Union, in four new pages of sworn testimony released Tuesday, confirmed his involvement in laying out a quid pro quo to Ukraine that he had previously not acknowledged. The issue is at the heart of the impeachment investigation into Trump, which turns on the allegation the president abused his power to extract political favors from a foreign power.

Trump has consistently maintained that he did nothing wrong and that there was no quid pro quo with Ukraine.

Sondland’s testimony offered several major new details beyond the account he gave the inquiry in a 10-hour interview last month. He provided a more robust description of his own role in alerting the Ukrainians they needed to go along with investigative requests being demanded by the president’s personal lawyer, Rudy Giuliani. By early September, Sondland said, he had become convinced military aid and a White House meeting were conditioned on Ukraine committing to those investigations.

The additions Sondland made to his testimony were significant because they were the first admission by a senior figure who had direct contact with Trump that the military aid for Ukraine was being held hostage to the president’s demands for investigations into his political rivals. A wealthy Oregon hotelier who donated to the president’s campaign and was rewarded with the plum diplomatic post, Sondland can hardly be dismissed as a “Never Trumper,” a charge Trump has leveled against many other officials who have offered damaging testimony about his conduct with regard to Ukraine.

As such, Sondland’s new, fuller account is likely to complicate Republicans’ task in defending the president against the impeachment push, effectively leaving them with no argument other than that demanding a political quid pro quo from a foreign leader may be concerning, but — in the words of Trump himself — is not “an impeachable event.”